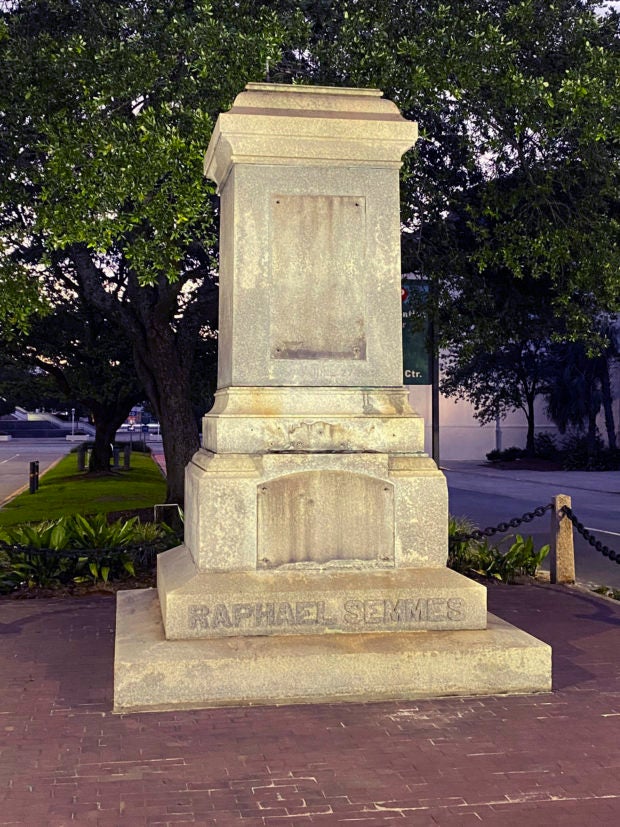 The pedestal where the statue of Admiral Raphael Semmes stands empty, early Friday, June 5, 2020, in Mobile, Alabama. The city of Mobile removed the Confederate statue early Friday without making any public announcements. (WMPI-TV via AP)

The bronze figure of Admiral Raphael Semmes had become a flashpoint for protest in the city. George Talbot, a spokesman for the city, confirmed Friday morning that the statue was removed by the city.

The removal of the 120-year-old figure follows days of protests in Alabama and across the nation over killings by police of African Americans. Other Confederate symbols are coming down around the South.

The city of Birmingham removed a towering obelisk after another statue was toppled by protesters. Virginia’s governor has decided to remove a huge statue of Gen. Robert E. Lee in Richmond, Virginia, after city authorities said they’ll remove other Confederate monuments from Monument Avenue.

Semmes was a Confederate commerce raider, sinking Union-allied ships during the Civil War. According to the Encyclopedia of Alabama, he was jailed on treason charges in New York City before returning South after the war and was later prohibited by U.S. authorities from taking office as an elected judge in Mobile. He devoted his later years to writing his memoirs and became a “Lost Cause” hero to Southerners who lamented the end of the Confederacy.

Semmes, a city of several thousand people outside Mobile, was incorporated in 2010 and named in his honor.