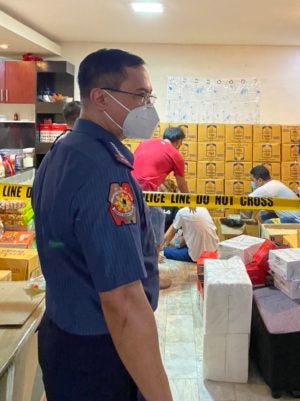 PNP chief Gen. Archie Gamboa inspects a warehouse where P5.14 billion worth of shabu was confiscated from three suspects, including a Chinese national. /PNP PIO

MANILA, Philippines — Police officers on Thursday uncovered a drug warehouse in Marilao, Bulacan province and seized more than P5.14 billion worth of crystal meth or shabu.

In an interview with reporters in Marilao, PNP chief Gen. Archie Gamboa said the Chinese man was “trusted” with the meth which was also used for drug peddling.

“Kapag sinabi mong bodegero and you entrust him (with) more than 700 kilos of shabu, he must be somebody who can be trusted who he believes he can really deliver at pwede niyang gawing negosyo (na) kaya niya ipatakbo,” Gamboa said.

(If you say he is a caretaker and you entrust him with more than 700 kilograms of shabu, he must be somebody who can be trusted who he believes he can really deliver and can use for illegal drug activities that he can run.)

Gamboa added that there was a “necessity” to conduct surveillance at the warehouse because there were reports of suspected illegal drug activity in the area.

The suspects were detained at PNP DEG while complaints for violation of the Comprehensive Dangerous Drugs Act of 2002 are being filed against them.