CEBU CITY—Bienvenido Bacalla Jr., 22, has been joining the Sinulog Grand Parade since he was eight.

“It may have started as a school activity but I developed the passion to dance over the years. I take this seriously as a devotee of Senior  Sto. Niño,” said Bacalla, a city resident.

During the Sinulog Grand Parade on Sunday, he was the choreographer of the Ramon Duterte Memorial National High School contingent that competed in the Sinulog-based (SB) category.

“It’s my way of saying thank you to Sto. Niño. I’ve been blessed to be part of several dance troupes, which trained me as a dancer. It’s now time for me to teach others what I learned,” said Bacalla. 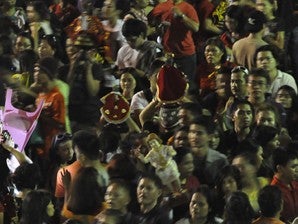 Grand champions in the two categories as well as street dancing competition will receive P1 million each.

The Sinulog Grand Parade kicked off at 9 a.m. with the performance from the city government contingent.

Another guest performer was Argao town’s La Torta Festival, which had Cebu Governor Gwendolyn Garcia as its lead dancer.

Sinulog, Cebu’s biggest festival, is celebrated every third Sunday of January in honor of the Child Jesus.

But another grand festival was also celebrated yesterday: the Ati-Atihan of Kalibo, Aklan, dubbed as the “mother of all Sto. Niño festivals,” being the oldest.

Kalibo Bishop Jose Corazon Tala-oc called on devotees of the Sto. Niño to learn from and take care of children as thousands flocked to the Ati-Atihan festival.

In his homily at a Mass marking the 800th year of the Ati-Atihan held in front of the St. John the Baptist Cathedral, Tala-oc reminded around 4,000 devotees to emulate the positive traits of children

“Jesus is telling us that we can learn from children. Children always tell the truth unless we influence them to lie. They are playful and find joy in everything around them even when the world worries of the many things that happen,” Tala-oc said.

Just like in Cebu, tens of thousands of devotees and revelers, including foreign tourists vacationing on Boracay Island, flocked to the festival filling the main streets of the town and danced to the drum-beatings and the melodic sounds of lyres until past midnight on Sunday. The street dancing, popularly known as “sadsad,” continued Sunday morning after the Mass.

Devotees also flocked to the Kalibo Cathedral to pray before the Sto. Niño. Those seeking cure for diseases joined healing rites known as “Pahilot” or “Paepak.”

On Saturday evening, the festivities were centered at the Magsaysay Park where the traditional fireworks display was held around 11 p.m.

Thousands also joined the famous “snake-dance” inside the park.

The festival ended Sunday evening with the traditional procession of Ati tribes and devotees bearing images of the Sto. Niño. The procession which usually takes around eight hours, ended at the cathedral.

Read Next
Laguna gov’t to build Calamba-Bay road
EDITORS' PICK
Geek out at TOYCON 2022 powered by Smart Signature
UK’s Boris Johnson will resign, BBC reports
High inflation: Your P1 is now worth only 87 centavos
High-risk pregnancy: Reducing your risk is in your hands
Unemployment rate up to 6% in May
House energy committee chair Arroyo bats for cheap electricity
MOST READ
Suspect in grisly killing of missing woman in Bulacan arrested
Kim Atienza’s daughter flaunts bikini body in response to critics of her ‘revealing photos’
Cop slain in Isabela ambush
FDA probes popular Filipino noodle brand for ‘high level of ethylene oxide’
Don't miss out on the latest news and information.