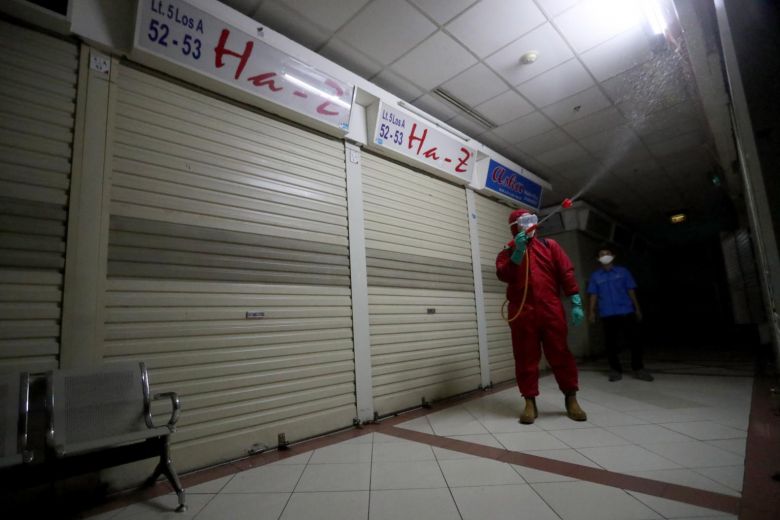 A fireman sprays disinfectant at Pasar Tanah Abang, in Jakarta, on June 4, 2020. PHOTO: EPA-EFE via The Straits Times

JAKARTA – Indonesia has moved to gently ease restrictive measures in its capital of Jakarta on Thursday (June 4), some two months after the coronavirus seized the country to infect more than 28,000 people, kill nearly 1,700, and place sprawling regions under partial lockdowns.

Over the next month, called the “transition phase”, workplaces, places of worship, shopping centers and recreational venues will gradually be allowed to open with strict health guidelines, which include operating at 50 per cent capacity and ensuring people maintain a 1m distance from one another.

Places of worship can open their doors on Friday (June 5), workplaces, restaurants and standalone retail shops on June 8, markets and malls on June 15, and recreational venues on June 20.

Children and the elderly, as well as pregnant women and the sick, must still stay at home.

Jakarta Governor Anies Baswedan told a press conference on Thursday that positive cases and deaths in the capital have been decreasing.

He said: “We have imposed social restrictions, which required strength, discipline and patience. It’s not an easy thing to do, but we managed to achieve it together. Our collective effort has helped to ease the infection rate.”

With what he called an “emergency brake policy”, the city administration can reinstate the restrictions should there be a spike in cases and fresh outbreaks.

Instead of a nationwide lockdown, the Indonesian government has opted for voluntary, large-scale social distancing measures, locally known as PSBB, by regional administrations to avoid social unrest and protect the economy.

Four provinces and 26 cities and regencies across the country adopted these measures in varying degrees, the first being Jakarta on April 10. The deadline to lift these restrictions in the city of more than 11 million people was extended twice to June 4.

Mr Anies said PSBB will remain in force as Jakarta moved towards “a safe, healthy and productive condition”. A review at the end of June will decide if the curbs should totally be lifted, he added.

Indonesia was among the last countries in South-east Asia to announce positive cases in early March. The ensuing restrictions had battered businesses, left millions jobless and threatened a GDP contraction of 0.4 per cent for the year in the worst-case scenario, leaving the government with little choice but to lift curbs despite rising cases and deaths, with its fatalities being the highest in Asia outside China and India.

In recent weeks, the government had indicated that it would gradually reopen the economy, especially labour-intensive sectors, and establish a so-called “new normal” until a vaccine is found.

President Joko Widodo told a Cabinet meeting on May 29 that national priorities from economy to health and education must continue even in the face of the pandemic.

“This means we must focus on controlling Covid-19, but strategic agendas that have a major impact on people’s lives must not be forgotten,” he said.

From May 26, some 340,000 police and military personnel have been deployed to four provinces to ensure people adhere to strict health protocols such as wearing masks and maintaining physical distance.

The government’s handling of the pandemic had courted public criticisms.

In a survey by Jakarta-based pollster Indo Barometer, nearly 54 per cent of 400 respondents polled between May 12 and 19 in seven provinces in Indonesia, including the hardest-hit provinces of Jakarta, East Java and West Java, said they were dissatisfied with the government’s response to the crisis.

Among other things, they cited late action in mitigating the outbreak, inconsistent policies and slow distribution of social aid.

Despite a ban on mudik, the annual trip made by city dwellers to their hometowns to celebrate Hari Raya Aidilfitri on May 24, lax enforcement in the country had triggered outbreaks.

The virus has since spread further from Jakarta, the epicenter of the outbreak, to other parts of Java, with East Java province emerging as a new hot spot with fresh clusters.

But for some Indonesians whose jobs involve working outdoors, the easing of measures was welcomed.

Jakarta resident Suryono, a 52-year-old odd-job laborer, said he was excited to receive his first job order, to install a septic tank at a private residence this week, after many quiet weeks.

He got to work earlier this week, before the curbs were lifted, as he needed the money to make ends meet. He told The Straits Times: “As long as we don’t join a crowd, it should be safe. People shouldn’t be that worried.

“I phoned my regular clients if they had any job for me. Some said yes, but they preferred to wait until the restrictions are officially lifted.”