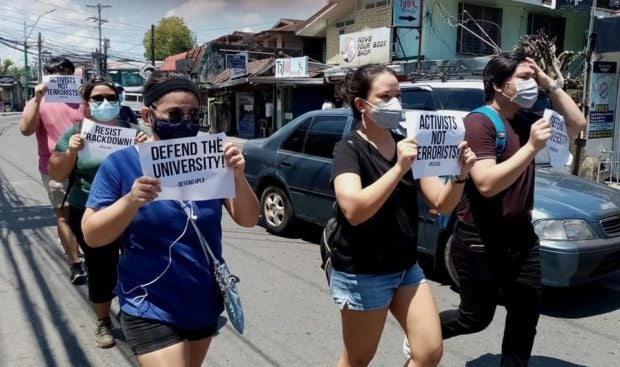 Students from UPLB echoed calls to junk the Anti-Terror Bill in a protest Thursday morning, saying the measure could be used to target student activists. CONTRIBUTED / Alex Baluyut

SAN PEDRO CITY –– About 30 students from the University of the Philippines Los Baños (UPLB) in Laguna marched outside the university campus on Thursday morning to protest the impending passage of the Anti-Terror Bill.

The student alliance called Defend-UPLB had also gathered around 600,000 signatures, which they planned to send to Congress, “at least before (President) Duterte signs the bill into law,” said its representative Jainno Bongon.

The majority in the House of Representatives voted in favor of the Anti-Terrorism Act of 2020, which seeks to penalize persons found guilty of inciting, proposing, or committing terrorist acts.

But critics of the proposed measure called out certain provisions, which they said could be used to stifle public dissent.

With face masks on and keeping safe distances between one another, the students said the very definition of “terrorist” is “vague” and may well be used against progressive student organizations.

“Just during our relief missions (amid the coronavirus pandemic), we’ve recorded 12 cases of threats and harassments (sent through) text messages,” Bongon said.

He said the passage of the bill, certified as urgent by the president, may also pave the way for heightened military and police presence on campus.