More than 100 charged with looting, assaults in California

SAN FRANCISCO  — California authorities have charged more than 100 people with looting, assault and other crimes committed during and around protests while police in a San Francisco Bay Area city said Wednesday that a break-in suspect died after being shot by police who mistook his hammer for a gun. 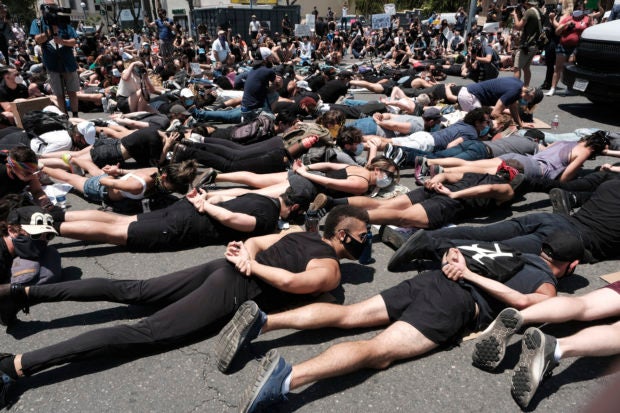 LGBTQ community members join Black Lives Matter demonstrators lie face down depicting George Floyd during his detention by police, blocking an intersection in protest over Floyd’s death, in West Hollywood, Calif., on Wednesday, June 3, 2020. Floyd, an African American, died on May 25 after a white Minneapolis police officer pressed a knee into his neck for several minutes even after he stopped moving and pleading for air. (AP Photo/Richard Vogel)

More than 3,000 people have been arrested in Los Angeles County since protests began last week, most accused of curfew violations.

The county produced the lion’s share of those charged with 61. Sacramento County has filed charges against 43 people and Orange County brought felony cases against two men, accusing one of trying to steal a police car and another of assaulting an officer by throwing rocks and bottles during demonstrations.

Los Angeles District District Attorney Jackie Lacey has been criticized for reluctance to bring charges against police officers for misconduct. At some Los Angeles protests demonstrators have chanted for her to be removed.

She said she supports peaceful protests “that already have brought needed attention to racial inequality throughout our society, including in the criminal justice system” but has a duty to “prosecute people who loot and vandalize our community.”

The charges were in crimes committed during sometimes violent protests and looting last weekend and Monday. Since then there has been much less crime and the demonstrations have taken on a more upbeat atmosphere. Local leaders and police have sometimes taken knees with demonstrators.

NBA stars Steph Curry and Klay Thompson marched with protesters in Oakland on Wednesday while peaceful protests attracting many thousands were held in Los Angeles and San Francisco. Many other communities had smaller demonstrations.

As flashes of violence and break-ins dwindle, some California counties and cities shortened curfew hours or announced plans to end them.

Los Angeles County pushed back the start of its curfew from 6 p.m. to 9 p.m., a help to newly reopened restaurants and retail stores that were shut down for weeks by anti-coronavirus orders.

“It’s just killing my dinner service. But I believe the curfew helps thin out the crowds,” said Darren Melamed, owner of Pizza World restaurant that was spared the major damage that hit dozens of neighboring businesses in the Fairfax District.

San Francisco will lift its curfew Thursday morning, Mayor London Breed announced. She ordered the daily 8 p.m. to 5 a.m. curfew after widespread break-ins and theft Saturday night, but some supervisors said they were disturbed by restrictions on free speech.

“Following Saturday night, it was important for the safety of our residents to ensure that we could prevent the violence and vandalism that had taken place, but we know that the overwhelming majority of people out protesting are doing so peacefully and we trust that will continue,” Breed said.

San Jose also will lift its curfew Thursday morning, while Alameda County planned to end the one there Friday at 5 a.m. Oakland Mayor Libby Schaaf said the city will reluctantly keep its 8 p.m. curfew in place indefinitely, though police are being judicious about detaining protesters.

The San Francisco Bay Area city of Vallejo has been a significant exception as other cities become more peaceful. Fifty members of the National Guard arrived Tuesday night amid a second straight day of violence, break-ins and theft.

The chief said officers responding to calls of looting at a Walgreens around 1 a.m. Tuesday confronted about a dozen people in the parking lot. One of the suspect’s cars rammed into a police vehicle.

Officers spotted Monterrosa near the building with what appeared to be a weapon in his waistband and opened fire. The suspected gun turned out to be a hammer, Williams said.

Monterrosa’s death prompted renewed calls against police brutality. Critics peppered a brief press conference by Williams, saying this was exactly the kind of police action they are protesting.

John Burris, an attorney for Monterrosa’s family, said the victim “was shot multiple times while he was on his knees and appeared to be trying to surrender.”

Elsewhere Wednesday, Gov. Gavin Newsom made a low-key visit to Los Angeles. He helped pack lunches for a senior meal program and toured a black-owned business. He applauded additional charges that were filed against Minneapolis police in the killing of George Floyd but also said institutional racism and other problems need to be confronted.

“This is so much bigger than the tragic death and loss of one individual,” he said. “This is the cumulative neglect of decades, centuries in this country that needs to be addressed.”

In the state capital, Sacramento Mayor Darrell Steinberg and Police Chief Daniel Hahn took a knee in honor of Floyd and marched with a few hundred demonstrators through scorching heat to a church.

Steinberg said an 8 p.m. to 5 a.m. curfew will extend through the weekend.

“I say that very reluctantly, but we want to make sure that everybody, including protesters, are safe,” he said. “To get through the next few days and then to start fresh on Monday, we believe is the best thing.”

Steinberg said most local business owners are not upset about the curfew, though he acknowledged the “double whammy” many are facing following stay-at-home coronavirus orders.

The technique, which can cut off blood flow to the brain and render a person unconscious, has been banned by many departments but is allowed in Sacramento under certain conditions. The suspect was arrested on suspicion of looting and resisting arrest.

On Wednesday, San Diego County Sheriff Bill Gore announced his department would stop using the carotid restraint. Gore said he took the action “in light of community concerns, and after consultation with many elected officials throughout the county.”