NEW YORK  — The Minneapolis police officer who used his knee to pin down George Floyd’s neck before his death was the most experienced of the four officers involved in the arrest, with a record that included medals for bravery and 17 complaints against him, including one for pulling a woman out of her car during a speeding stop. 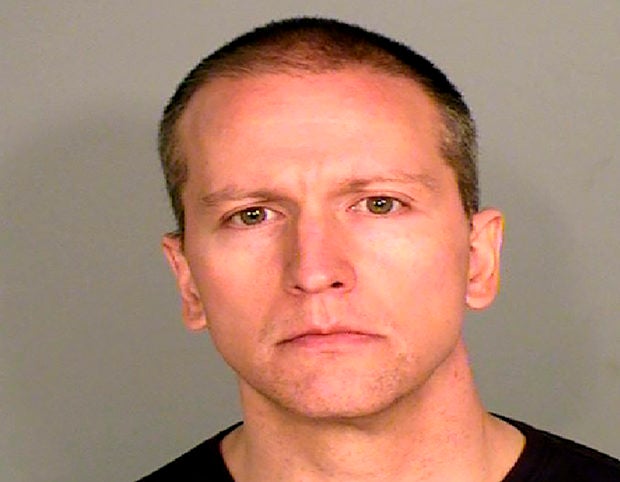 FILE – This file photo provided by the Ramsey County Sheriff’s Office shows former Minneapolis police Officer Derek Chauvin, who was arrested Friday, May 29, 2020, in the Memorial Day death of George Floyd. Prosecutors are charging Chauvin, accused of pressing his knee against Floyd’s neck, with second-degree murder, and for the first time will level charges against three other officers at the scene, a newspaper reported Wednesday, June 3, 2020. (Courtesy of Ramsey County Sheriff’s Office via AP, File)

New details about Derek Chauvin and the other now-fired officers emerged Wednesday after prosecutors upgraded Chauvin’s charge to second-degree murder and charged the others with aiding and abetting in a case that has convulsed the nation with protests over race and police brutality.

Heavily redacted personnel files show that Chauvin, a 19-year veteran of the force, was initially trained as a cook and served in the Army as a military police officer.

Eleven-year veteran and native Hmong speaker Tou Thao began as a community service officer and was the subject of six complaints.

The other two officers were relative newcomers to the department, including Thomas Lane, a former juvenile detention guard who did volunteer work with Somali refugees, and J. Alexander Kueng, who got his start in law enforcement by patrolling his college campus and a department store.

The files were notable for what they didn’t include. Only one of the 17 complaints against Chauvin was detailed, none of the six against Thao were mentioned and there was no further detail about a 2017 excessive force lawsuit against Thao.

Records show that the 44-year-old Chauvin initially studied cooking before taking courses in law enforcement and doing two stints in the Army as a military police officer in the late 1990s, serving at Fort Benning, Georgia, and in Germany.

Chauvin became a Minneapolis police officer in 2001 and the lone reprimand in his file involved a 2007 incident when he was accused of pulling a woman out of her car after stopping her for going 10 mph (16 kph) over the speed limit. Investigators found it was not necessary for Chauvin to remove the woman from the car and noted that his squad car video was turned off during the stop.

But Chauvin was also singled out for bravery. Files show he won two medals of valor, one in 2006 for being part of a group of officers who opened fire on a stabbing suspect who pointed a shotgun at them, and another in 2008 for a domestic violence incident in which Chauvin broke down a bathroom door and shot a suspect in the stomach.

He also won medals of commendation in 2008 after he and his partner tackled a fleeing suspect who had a pistol in his hand, and in 2009 for single-handedly apprehending a group of gang members while working as an off-duty security guard at the El Nuevo Rodeo, a Minneapolis nightclub.

Since his arrest, the former owner of the club, Maya Santamaria, said Chauvin and Floyd both worked as security guards there at various times but that she wasn’t sure if they had known one another. She said Chauvin was unnecessarily aggressive on nights when the club had a black clientele, quelling fights by dousing the crowd with pepper spray and calling in several police squad cars as backup, a tactic she called “overkill.”

Chauvin’s wife, Kellie, a Laotian immigrant who became the first Hmong winner of the Mrs. Minnesota pageant, said shortly after his arrest last week that she intends to divorce him.

Before news of the upgraded charges, an attorney for Chauvin said he was not making any statements at this time. Lawyers for the others did not return messages seeking comment.

In cellphone video of the May 25 arrest of Floyd, Chauvin is shown pressing his knee onto Floyd’s neck for more than eight minutes while Floyd cries out “I can’t breathe” and eventually stops moving.

During much of the arrest, Kueng and Lane were helping Chauvin restrain Floyd. Thao was standing nearby keeping onlookers back.
According the complaint, at one point during the arrest, as Chauvin held Floyd down with his knee, Lane asked Chauvin twice whether they should roll Floyd over.

“No, staying put where we got him,” Chauvin replied.

“I am worried about excited delirium or whatever,” Lane said. And Chauvin replied again, “That’s why we have him on his stomach.”
None of the three officers moved from their positions.

Lane joined the police early last year as a 35-year-old cadet — much older than most rookies — and became a full-fledged officer last December. He had no complaints in his file during his short time on the force.

On employment forms, the University of Minnesota graduate said he done volunteer work tutoring Somali youth and as a mentor helping at-risk elementary school students with reading and homework.”

Kueng, at 26 the youngest of the four officers, was also a recent recruit to the police force. He completed his year’s probation just three months before the Floyd arrest. His personnel file, which notes that he speaks, reads and writes Russian, did not include any commendations or disciplinary actions during his short time on force.

Kueng was a 2018 graduate of the University of Minnesota, where he worked part-time as part of the campus security force. He also worked nearly three years as a theft-prevention officer at Macy’s.

Thao joined the police force part-time in 2008 while attending community college. Before that, he worked as a security guard, a supermarket stocker and trainer at McDonald’s.

City records show six complaints were filed against Thao, but there was no mention of that in the records released Wednesday. There also was no mention of a 2017 federal lawsuit accusing him and another officer of excessive force. According to the lawsuit, Lamar Ferguson claimed that in 2014, Thao and his partner stopped him and beat him up while he was on his way to his girlfriend’s house. The lawsuit was settled for $25,000.