Attempt to kill Mohammad Sangki, who is under gov’t protection, second since March
By: Bong S. Sarmiento - @inquirerdotnet
Philippine Daily Inquirer / 05:04 AM June 04, 2020 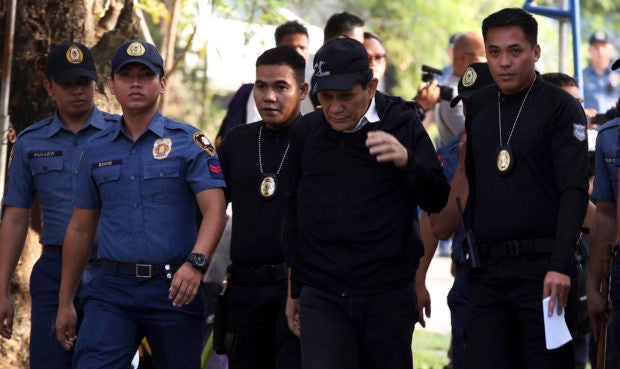 TIGHT SECURITY | Mohammad Sangki (second from right, with cap), an important witness to the 2009 Maguindanao massacre, is guarded by policemen when he appeared in court for the case’s promulgation of judgment in December last year. (Photo by LYN RILLON / Philippine Daily Inquirer)

KORONADAL CITY, South Cotabato, Philippines — A vital witness to the 2009 Maguindanao massacre on Wednesday survived a second slay attempt in over two months, prompting renewed calls to the Department of Justice (DOJ) to release its resolution involving the second set of suspects in the carnage that took the lives of 58 people, including 32 media workers.

Mohammad Sangki, who has been under the DOJ’s Witness Protection Program (WPP), and his security escort suffered minor wounds but the driver of their Toyota Innova, Richard Escovilla, was killed.

Sangki’s group came from Tacurong City in Sultan Kudarat province, and was going to the airport in General Santos City for a flight to Metro Manila when attacked at Barangay Bukaypait in Tantangan, South Cotabato province.

Sangki’s security escort was able to fire back at the attackers, police said.

Col. Jemuel Siason, South Cotabato police director, said a pursuit was launched against the suspects who reportedly fled in a black sport utility vehicle toward this city.

Former Maguindanao governor and now Rep. Esmael Mangudadatu condemned the attack on Sangki, whom he described as an important witness in the Maguindanao massacre case.

“Mohammad Sangki was among those who gave testimonies against Unsay,” Mangudadatu told the Inquirer by telephone.

Mangudadatu was referring to Andal Ampatuan Jr., one of the principal suspects in the massacre, the worst election-related violence in the country and the deadliest attack against media workers in the world.

Mangudadatu’s wife, Genalyn, and several family members were among those killed in the bloodbath on Nov. 23, 2009, in a hilly area in Ampatuan town in Maguindanao.

In December last year, the court found Andal Jr. and his brother Zaldy, former governor of the Autonomous Region in Muslim Mindanao, guilty of 57 counts of murder and sentenced them to 40 years in prison without parole.

At least 198 people were charged, including former Maguindanao Gov. Andal Ampatuan Sr. who died from sickness in 2015 while in detention, for the massacre.

The court found 43 of the accused guilty while 56 others were acquitted. Of the 43 convicted, 28 were sentenced to reclusion perpetua (at least 40 years in prison) without parole and 15 others to six to 10 years as accessories to the crime.

Andal Jr. and Zaldy had appealed their conviction.

Grave dangerMangudadatu said that with the second attempt to kill Sangki, “it was urgent for the DOJ to release its resolution on the case against the second set of suspects,” he said.

Mangudadatu added: “He (Sangki) is a vital witness and some of those in the second wave are still at large. The life of this witness is in grave danger [while awaiting the total closure of the case].”

On March 17, armed men also attacked Sangki and his companions near the provincial police headquarters in Shariff Aguak town in Maguindanao.

Lawyer Nena Santos, one of the counsels of Mangudadatu and of relatives of some of the slain media workers, urged the National Bureau of Investigation to look into the latest attack on Sangki and as well as those on the other witnesses.

Sangki is an uncle of Rasul Sangki, who was the vice mayor of Ampatuan town in 2009 and also a prosecution star witness. Escovilla had served as driver for prosecution witnesses since 2009.