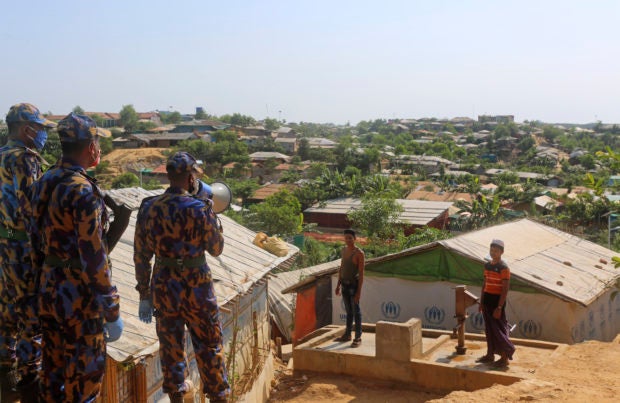 In this Friday, May 15, 2020, file photo, a security officer makes announcements on a megaphone for people to observe social distancing at Kutupalong Rohingya camp bazar in Cox’s Bazar, Bangladesh. Authorities in Bangladesh on Tuesday, June 2, confirmed the first death of a Rohingya refugee amid rising cases of new infections in the sprawling camps in the South Asian country where more than 1 million Rohingya Muslims have been sheltered after fleeing from neighboring Myanmar, according to a doctor and the United Nations. The 71-year-old refugee died Saturday at Ukhiya in Cox’s Bazar, but samples collected from him proved positive on Monday, said Abu Toha M.R. Bhuiyan, chief health coordinator of the office of Refugee, Relief and Repatriation Commissioner. (AP Photo/Suzauddin Rubel, File)

DHAKA, Bangladesh — Authorities in Bangladesh have confirmed the first death of a Rohingya refugee from the coronavirus, as infections rise in sprawling camps where more than 1 million Rohingya Muslims have been living since fleeing from neighboring Myanmar.

The 71-year-old refugee died Saturday at Ukhiya in Cox’s Bazar, and samples collected from him tested positive on Monday, said Abu Toha M.R. Bhuiyan, chief health coordinator of the office of the Refugee, Relief and Repatriation Commissioner.

The man died in an isolation center set up by the government and aid agencies where he had been admitted with COVID-19 symptoms a week earlier.

Louise Donovan, a spokeswoman for the U.N. refugee agency, said at least 29 Rohingya refugees have tested positive for the disease.

With about 40,000 people per square kilometer (103,600 per square mile), the 34 refugee camps have more than 40 times Bangladesh’s average population density. Each shack is barely 10 square meters (107 square feet) and many are packed with up to 12 residents.

Aid agencies and government officials say the challenge of handling a wide outbreak of the virus could be huge.

Authorities in Buddhist-majority Myanmar consider Muslim Rohingya to be migrants from Bangladesh, even though their families have lived in Myanmar for decades. Nearly all have been denied citizenship since 1982, effectively rendering them stateless. They are also denied freedom of movement and other basic rights, including education.

Most of the Rohingya in the camps fled Myanmar after August 2017, when Myanmar’s military launched clearance operations in response to attacks by a rebel group. Security forces have been accused of mass rapes, killings and the burning of thousands of homes.