Thousands march in Sydney in solidarity with US protests | Inquirer News

Thousands march in Sydney in solidarity with US protests 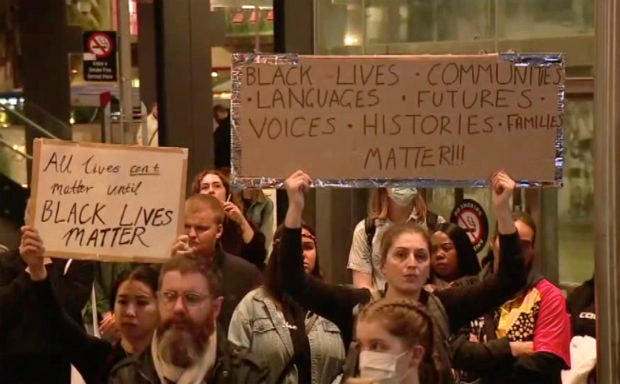 In this image made from video, protesters hold up placards reading “Black Lives Matter” during a peaceful rally in Perth, Australia, Monday, June 1, 2020. Hundreds of demonstrators gathered to protest the death of George Floyd, a black man, who died after being restrained by Minneapolis police officers on May 25. (Channel 10 via AP)

SYDNEY — Thousands of protesters marched through downtown Sydney on Tuesday, voicing their solidarity with Americans demonstrating against the death of George Floyd.

The protesters in Australia’s largest city chanted, “I can’t breathe” — some of the final words of both Floyd and David Dungay, a 26-year-old Aboriginal man who died in a Sydney prison in 2015 while being restrained by five guards.

The demonstrators carried placards reading, “Black Lives Matter,” “Aboriginal Lives Matter,” “White Silence is Violence” and, referring to those protesting in cities across the U.S., “We See You, We Hear Your, We Stand With You.” Other placards read, “We’re here because they aren’t,” with depictions of Floyd and Dungay.

They marched from Hyde Park to the New South Wales state Parliament with plans to continue to the U.S. Consulate.

Around 2,000 demonstrators had gathered in Australia’s west coast city of Perth on Monday night to peacefully protest Floyd’s death, and rallies are planned for other Australian cities this week.

Floyd died last week after he was pinned to the pavement by a white police officer who put his knee on the handcuffed black man’s neck until he stopped breathing. His death in Minneapolis set off protests that spread across America.

An indigenous Australian lawmaker called on governments to use Floyd’s death as an opportunity to reduce the deaths of indigenous people in custody.

Linda Burney, the opposition spokeswoman on indigenous Australians, said Tuesday that more than 430 indigenous people had died in Australian police custody since 1991.

“I think we should be using it as an opportunity,” Burney told Australian Broadcasting Corp., referring to Floyd’s death. “Whether we like it or not, it doesn’t take much for racism to come out of the underbelly of this country.”

“It seems to me that there are lots of things that state and territory governments could do, and the federal government could do to lower the number of Aboriginal people in custody,” she added.

While indigenous adults make up only 2% of the Australian population, they account for 27% of the prison population.

Opposition leader Anthony Albanese backed Burney’s call. “There are far too many indigenous Australians who are incarcerated today. As a percentage of the population, this is a tragedy and it’s one that must be addressed as an absolute national priority,” Albanese told reporters.

Meanwhile, more African leaders are speaking up over the killing of Floyd.

“It cannot be right that, in the 21st century, the United States, this great bastion of democracy, continues to grapple with the problem of systemic racism,” Ghana’s president, Nana Akufo-Addo, said in a statement, adding that black people the world over are shocked and distraught.

Kenyan opposition leader and former Prime Pinister Raila Odinga offered a prayer for the U.S., “that there be justice and freedom for all human beings who call America their country.”

Like some in Africa who have spoken out, Odinga also noted troubles at home, saying the judging of people by character instead of skin color “is a dream we in Africa, too, owe our citizens.”

And South Africa’s finance minister, Tito Mboweni, recalled leading a small protest outside the U.S. Embassy several years ago over the apparent systemic killings of blacks. Mboweni said the U.S. ambassador at the time, Patrick Gaspard, “invited me to his office and said: ‘What you see is nothing, it is much worse.'”

In Europe on Monday, thousands spilled across streets in Amsterdam to denounce police brutality, and those demonstrating in Paris urged the French government to take police violence more seriously and held up signs like “Racism is suffocating us.”

Some government leaders have seen the U.S. unrest as a chance to highlight what they see as American hypocrisy on protest movements at home versus abroad.

“They take their own country’s national security very seriously, but for the security of our country, especially the situation in Hong Kong, they are looking at it through tinted glasses,” Lam said Tuesday.