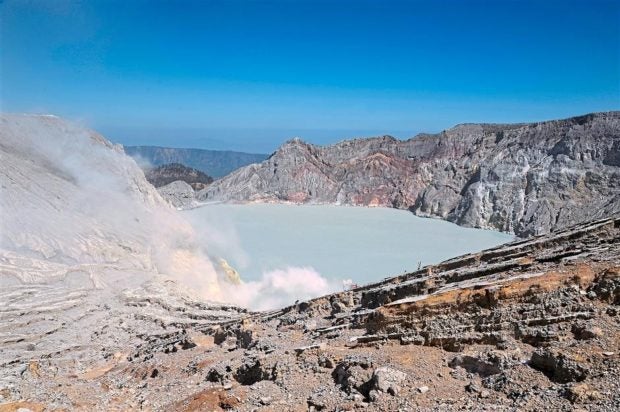 A sulfur miner was killed when volcanic activity on Mount Ijen, East Java, released poisonous gas and triggered a 3-meter wave in a natural lake situated within the volcano’s crater on Friday afternoon. (The Star/Asia News Network/-)

JAKARTA — A sulfur miner was killed when volcanic activity at Mount Ijen in East Java released poisonous gas and triggered a 3-meter wave in a natural lake situated within the volcano’s crater on Friday afternoon.

The tremor occurred within the mountain at 12:30, resulting in toxic air and an isolated wave from the lake in the crater, kompas.com reported.

The wave that was formed in the wake of the volcanic activity recorded on Friday qualified as a tsunami, according to Indonesian tsunami expert Widjo Kongko.

He said a tsunami typically occurred when activities at the bottom of an ocean, gulf or lake disturbed the column of water on the surface.

“[A tsunami] may be triggered by an earthquake, landslide or volcanic activity. The phenomenon recorded in the lake within Mount Ijen’s crater is an example of a tsunami,” Widjo said on Monday.

He went on to say that the wave that occurred on Friday was known among experts as a seiche.

He explained that several lakes, such as Lake Toba in North Sumatra and Lake Poso in Central Sulawesi, were formed following a series of volcanic events similar to the one that occurred on Mount Ijen.

Widjo called on the East Java Disaster Mitigation Agency (BPBD) to conduct research into volcanic activities in the region and formulate robust mitigation plans, such as setting up early warning systems, to prevent further losses and damage in the event of a seiche.

“The development of a tourist destination around any lake must be done in accordance with disaster mitigation principles,” he said.

Mount Ijen has been popular among tourists for its turquoise sulfur lake, as well as a natural phenomenon dubbed the ‘blue fire’.

According to experts, the blue fire results from the crater’s sulfuric gas igniting as it emerges and comes into contact with the air, without producing smoke.