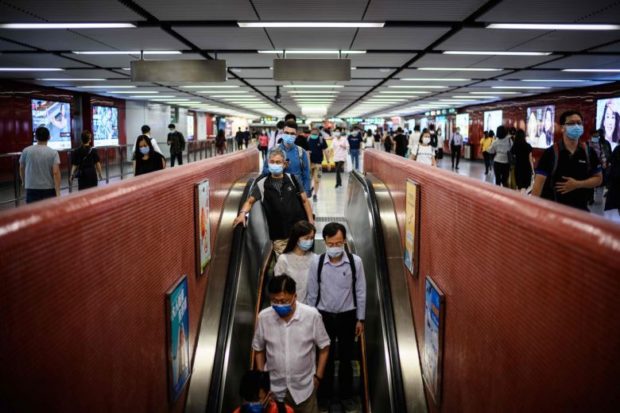 Hong Kong was on the verge of reverting to normal life. AFP

HONG KONG — A coronavirus outbreak in a Hong Kong residential estate that ended a 16-day streak of zero local infections has sparked warnings from the city’s Chief Executive, prompting the government to extend existing social distancing measures that are about to expire.

Local broadcaster TVB on Tuesday (June 2) said the city’s Executive Council has agreed to extend coronavirus prevention measures, including a ban on public gatherings of more than eight people and border restrictions.

Hong Kong leader Carrie Lam on Tuesday morning expressed concerns about the local outbreak where nine people have been infected with Covid-19.

Speaking before the weekly Executive Council meeting, Mrs Lam said health officials are now rushing to test residents living in the same building in Sha Tin to see how far the virus has spread and to locate the source of infection.

“I am very worried about this outbreak in community, not because of the number of nine confirmed patients, but also because this particular cluster reflects some characteristics which we might not have seen before.

“Living in the same building but not affected by the drainage system or the building’s structures is something that gets me, and also I believe the experts, very worried,” said Mrs Lam, who added that the government will adopt a “cautious and prudent approach” in deciding whether to relax social distancing measures and border controls after this local outbreak.

Restrictions have been eased, but the government ban on public gatherings of more than eight people is due to expire on Friday, while the mandatory 14-day quarantine for people who enter Hong Kong is set to expire later this month.

Mrs Lam, asked if the freedom to hold assemblies would be curtailed for a long while, said “public health is also part of national security”.

“When it comes to matters like public security, people will accept, Hong Kong people willingly abide by some of the restrictions in order to protect themselves, their families and society at large,” she said.

Of these, 1,037 patients were discharged and four cases were fatal.

The local spread is connected to a 34-year-old woman and her husband who were diagnosed on Sunday.

Since then, four neighbors, two of the woman’s colleagues, a paramedic who wore only a surgical mask when performing some procedures on the woman while taking her to the hospital, have all tested positive.

Local media said the man is the first paramedic in Hong Kong believed to have caught the virus at work.

The infected woman is a night-shift worker at a Kerry Logistics warehouse, where she labels food items imported from Britain, local reports said.

Health Secretary Sophia Chan has said more than 800 samples have been collected from residents for testing.

On Monday night, microbiologist Yuen Kwok Yung said there could have been a super-spreader at Sha Tin’s Lek Yuen Estate, where the couple live.

The Hong Kong University professor, who advises the government on social distancing measures, said it was unlikely the building has structural issues that led to the cluster.

Prof Yuen told local media that the disease may have spread in the woman’s building because she shared facilities such as lifts, doors and mailboxes with others.

He pointed out that the government’s “biggest mistake” so far is not having more people tested as there could be many transmission chains in the community.