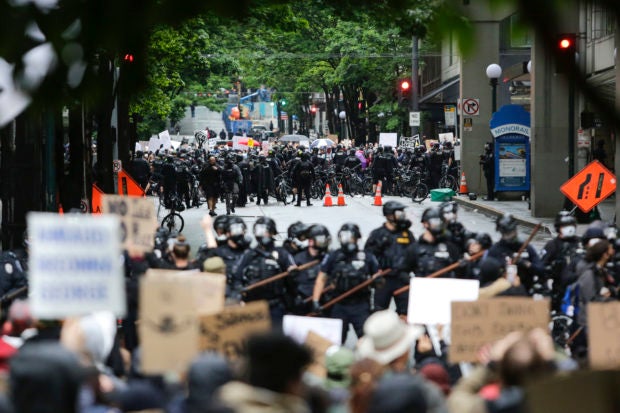 Police block the street during a protest against the death of George Floyd in Seattle, Washington on May 30, 2020. Image: AFP/Jason Redmond

A policeman pushed his fellow officer’s knee off of a man’s neck during a protest against the death of George Floyd, who died after being restrained in the same way.

The two cops captured the man when he tried to loot a store amid a demonstration in Seattle, United States last Saturday, May 30. Journalist Matt McKnight posted a clip of the incident on his Instagram page the following day.

Prior to capturing the man, who wore an orange jacket, the said officer used the same “knee-on-neck tactic” on another looter.

When the policeman saw the man try to flee the store, he immediately stood up to stop him. Once the officer and his colleague successfully forced the looter on the ground, he placed his knee on the man’s neck.

Upon seeing this, bystanders quickly shouted at the policeman to stop placing his knee on the looter’s neck.

“Get your f*cking knee off his neck,” one bystander, who is not seen in the video, screamed repeatedly as others echoed his plea.

The other cop glanced at the crowd before pushing his colleague’s knee off of the man’s neck and onto his back. They then handcuffed the looter and brought him away from the store.

Protests and looting broke out across the U.S. after Floyd died while in police custody in Minneapolis, Minnesota on May 25. Ryan Arcadio/NVG