Over 70 Korean-owned properties suffer damage in US protests 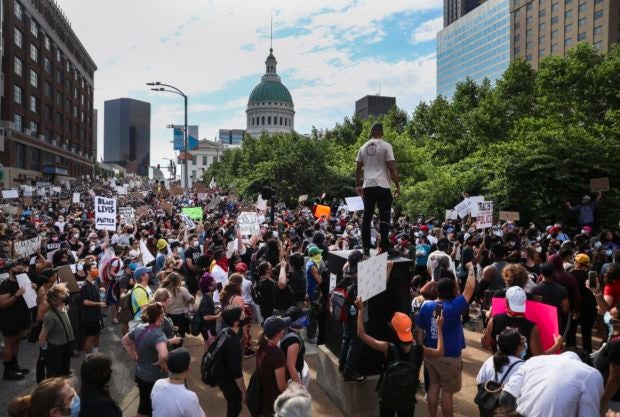 On Monday, Protesters in St. Louis were demonstrating against the death of George Floyd, who died May 25 after being detained by Minneapolis police. AP-Yonhap

SEOUL — Over 70 cases of damage to properties owned by South Koreans in the US have been reported due to violent protests convulsing across the country, fueled by the police-involved death of an African American man George Floyd, officials here said Tuesday.

The Foreign Ministry said a total of 79 stores operated by Koreans reported damage — 50 cases in Philadelphia, 10 in Minneapolis, five in Raleigh, North Carolina, and four in Atlanta — due to looting and vandalism.

No casualties from Korean communities have been reported so far.

Second Vice Foreign Minister Lee Tae-ho presided over an emergency videoconference in the morning, with the consuls of eight Korean diplomatic missions in the country: New York, Boston, Atlanta, Chicago, Houston, Seattle, San Francisco and Los Angeles. The Korean Embassy in Washington could not participate due to the citywide curfew imposed in the nation’s capital.

During the meeting, the officials reported on the current situation and preventive measures for damages, and discussed ways to deal with the ongoing situation.

“We will identify the extent of damage on Korean nationals in the US and closely cooperate with local missions to secure safety for our nationals and minimize the damage,” a ministry official said.

Demonstrators filled the streets across multiple US cities after Floyd died last week in Minnesota after a white police officer pressed a knee into his neck for nearly nine minutes, ignoring complaints that he could not breath. At least 5,600 people have been arrested in cities around the US since protests broke out, according to a count by the Associated Press, for burglary, vandalism and breaking curfew.