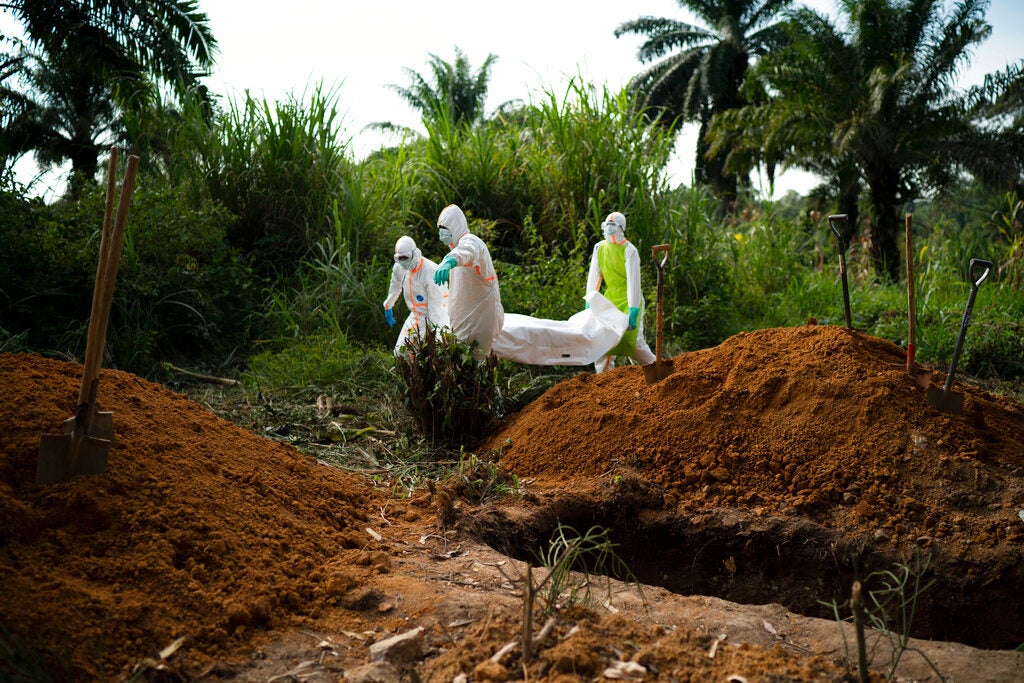 KINSHASA–DR Congo reported a fresh Ebola outbreak in its northwest on Monday, the latest health emergency for a country already fighting an epidemic of the deadly fever in the east as well as a surging number of coronavirus infections.

The 11th Ebola outbreak in the vast central African country’s history comes just weeks before it had hoped to declare the end of the 10th in the east.

Health Minister Eteni Longondo said that “four people have already died” from Ebola in a district of the northwestern city of Mbandaka.

“The National Institute of Biomedical Research (INRB) has confirmed to me that samples from Mbandaka tested positive for Ebola,” Longondo told a press conference on Monday.

“We will send them the vaccine and medicine very quickly,” he said, adding that he planned to visit the site of the outbreak at the end of the week.

The capital of Equateur province, Mbandaka is a transport hub on the Congo River with a population of more than a million.

Equateur province was previously hit by an Ebola outbreak between May and July 2018, in which 33 people died and 21 recovered from the disease.

“This is a province that has already experienced the disease. They know how to respond. They started the response at the local level yesterday (Sunday),” Longondo said.

The World Health Organization said it would be sending a team to help support DR Congo response.

“To reinforce local leadership, WHO plans to send a team to support scaling up the response,” Dr Matshidiso Moeti, WHO Regional Director for Africa, said in a statement.

“Given the proximity of this new outbreak to busy transport routes and vulnerable neighboring countries we must act quickly.”

The Ebola epidemic in the country’s east has killed 2,280 people since August 2018, and officials had hoped to be able to proclaim it over on June 25.

For it to be officially over, there have to be no new cases reported for 42 days — double the incubation period.

The eastern epidemic was just three days away from being declared over on April 10 when a new case was reported.

Seven new cases were then recorded, including four deaths, two recoveries and one patient who fled, and the clock was restarted on May 14.

The WHO also extended its Public Health Emergency of International Concern designation for the epidemic, which has mainly affected the North Kivu province.

Two experimental vaccines have been widely deployed to fight the outbreak, with more than 300,000 people vaccinated across the country.

However efforts to contain Ebola in the east have been hindered by attacks on health workers and conflicts in the country’s volatile region, long riven by militia killings and ethnic violence.

The eastern Ebola outbreak is the second worst in history, after an epidemic in 2014 killed about 11,000 people — mostly in Guinea, Liberia and Sierra Leone.

The newest Ebola outbreak is the 11th in the Democratic Republic of Congo since the highly contagious hemorrhagic fever was identified in 1976 in Equateur province in the country then known as Zaire.

The virus is passed on by contact with the blood, body fluids, secretions or organs of an infected or recently deceased person.

The death rate is typically high, ranging up to 90 percent in some outbreaks, according to the WHO.

The country is also fighting its own coronavirus outbreak, recording 3,195 infections — 2,896 in the capital Kinshasa — and 72 deaths, according to official figures released Monday.

“We are in an ascending period of the curve,” Longondo said, adding that it was still too “risky” to lift measures imposed on March 20 to stem the spread of COVID-19.

Under the measures, travel is banned between Kinshasa and the rest of the country.

No coronavirus cases have been reported in Equateur province. Mbandaka is 600 kilometres (370 miles) from Kinshasa, but the two cities are connected by the Congo river, with a trip down it taking about a week.

“I have devoted all my life and all my career to fighting Ebola,” Muyembe has said.

The country is also facing a measles outbreak which has killed more than 6,000 people since early last year, as well as recurring flare-ups of cholera and malaria.