Workers were forced to walk or to hitch rides on trucks or, if they were lucky, in cars due to a lack of public transportation. Many were stranded.
By: Jodee A. Agoncillo, Krixia Subingsubing, Meg Adonis - @inquirerdotnet
Philippine Daily Inquirer / 04:58 AM June 02, 2020 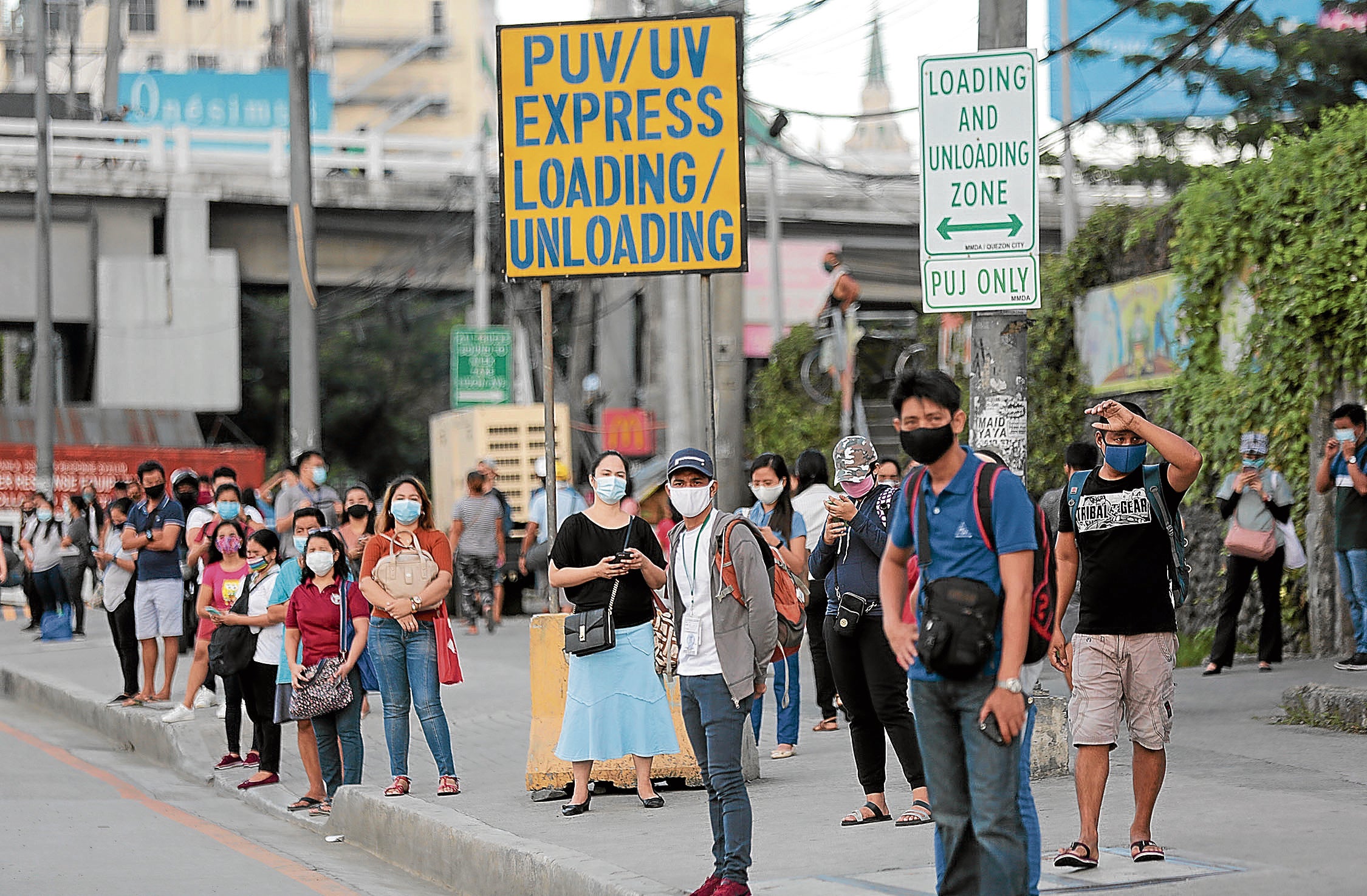 THE DAY BEGINS Commuters wait for a ride at a bus stop along Commonwealth Avenue in Tandang Sora, Quezon City, on Monday, when general community quarantine took effect. But public utility vehicles were mostly out of sight, as workers venturing to return to their jobs found out. —GRIG C. MONTEGRANDE

MANILA, Philippines — They were raring to go back to work on Monday after three months of being cooped up at home.

But the lack of public transportation forced thousands on the first day of general community quarantine (GCQ) in Metro Manila to walk to offices, hitch rides on the backs of trucks or, if they were lucky, in private vehicles. Others were stranded.

The GCQ allows many businesses to reopen for the first time since mid-March.

But many could not get rides in the eastern part of Metro Manila, particularly along Commonwealth and Cubao in Quezon City and Marcos Highway in Marikina City, where there were no trains, buses, jeepneys or UV Express vans.

Videos of Commonwealth and Marcos Highway showed several workers walking along the thoroughfares, hoping to hitch a ride with a stray shuttle service or a car with a kind driver.

In Cubao, passengers mistakenly thought the Department of Transportation’s (DOTr) bus augmentation program, which mobilized a fleet of 90 buses to offset the reduced capacity of the MRT 3, would pass by.

Some of them were simply not informed that buses (save for those on Edsa), jeepneys and UV Express vans remained banned under GCQ, said General Manager Jojo Garcia of the Metro Manila Development Authority (MMDA ).

By 10 a.m., the MMDA, Philippine Coast Guard and Philippine National Police deployed several shuttles and trucks along these areas to sweep the workers.

But the workers were forced to ride side-by-side with other passengers, with no physical distancing whatsoever, said Ariel Inton, chair of commuter legal group Lawyers for Commuters’ Safety and Protection.

Only 90 buses were allowed to traverse Edsa, with only four stops at the innermost lanes of the 23.8-kilometer highway—North Avenue and Quezon Avenue in Quezon City, Ayala Avenue in Makati and Taft Avenue in Pasay.

The buses were meant to accommodate the usual passengers of the Metro Rail Transit (MRT) Line 3 who were not able to board the train due to limited capacity because of physical distancing.

There were long lines at the Light Rail Transit (LRT) Line 1, which runs from Roosevelt station on Edsa in Quezon City to Baclaran station in Parañaque, but few passengers at LRT 2, which links Pasig and Marikina to Manila.

At 7:30 a.m. on Monday at LRT 1 Roosevelt station, the line to the entrance snaked from the baggage inspection area until the front of a mall facing Edsa, with commuters strictly practicing physical distancing as policemen kept watch.

The line along the platform before entering the trains was limited to only two people per door, with a total of about 10 passengers per car.

But even as some commuters taking LRT 1 experienced a “smooth” ride, they struggled to catch a connecting ride to their offices on Edsa.

Margaux, who works in Caloocan City, lamented that one of her coworkers had trouble getting to their office because no other public transport vehicles were available.

Very few passengers took LRT 2 at Cubao Station, as many were stranded, relying only on free rides and available buses to reach the train station.

Ariel Mejia, a sales staff in Camp Crame, Quezon City, woke up around 4 a.m. but had to walk from his home in Valenzuela City.

RETURN OF TRAFFIC Cars crowd their designated lanes as well as the portion of Edsa that is supposed to be for bicycles . At right, bus passengers observe physical distancing. —NIÑO JESUS ORBETA AND MARIANNE BERMUDEZ

A free ride brought him to Monumento in Caloocan where he was able to catch one of the augmentation buses an hour after.

He then took the LRT 1 station on Rizal Avenue, Manila, transferred to Doroteo Jose and finally landed at LRT 2 Cubao station past 9 a.m.

“We were told that everything would be OK. But why are there not enough buses? They’re making things difficult for the public. Glad that I was able to chance upon an L300 “Libreng sakay,” Mejia said.

He said he would have walked longer. “I didn’t have much choice.”

LRT 2 spokesperson Hernando Cabrera placed the number of passengers on Monday at less than 15,000, a fraction of the LRT 2’s design capacity of 600,000 passengers daily.

He noted that many passengers had no ride to get to the station.

“One walked, some asked to be driven to the station, some hitched a ride, others rented an expensive taxi,’’ he said.

Others were on carpool or were driven by cars to the train stations.

To deal with the dearth of transport in the eastern corridors, the Land Transportation Franchising and Regulatory Board on Monday approved two new city routes—Route 5, Angat-Quezon Avenue ( 510 units) and Route 28, Dasmariñas-Manila (151).

Hundreds of bikers were seen along the outermost right lane of Edsa where the DOTr and the MMDA said they planned to place bike lanes.

Wary of riding the trains, Regin Rex, 27, an elementary teacher, chose to bike. He bought a BMX in Cartimar in Pasay on Sunday.