Gov’t to support workers, residents who will venture into farming once they return to provinces
By: Armand Galang - Correspondent / @AMGalangINQ
Philippine Daily Inquirer / 04:19 AM June 02, 2020 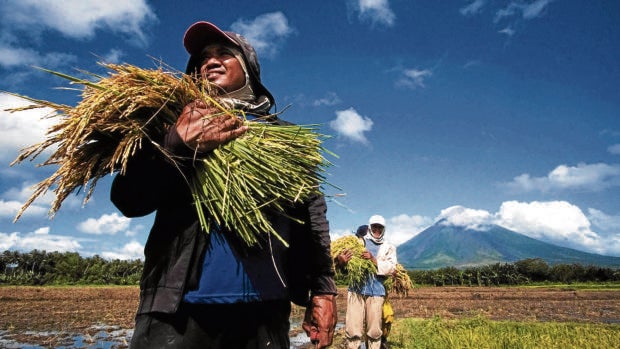 HOPE IN FARMS Farmers harvest rice in the village of Pawa in Legazpi City, Albay, in this photo taken in 2019. The government is eyeing farming and other agriculture-related ventures as livelihood sources for families who will return to their home provinces under the “Balik Probinsya” program. —MARK ALVIC ESPLANA

The agency, he said, had 420,000 hectares of privately acquired lands and 150,000 ha of unused government-owned lands ready for distribution to qualified beneficiaries.

Castriciones announced this as he led the distribution of food packs to agrarian reform beneficiaries here and in Gabaldon town in Nueva Ecija province on Friday.

The government has lands that can be distributed as part of the Balik Probinsya program to lure Metro Manila migrants and returning overseas Filipino workers back to the provinces, he said.

According to Castriciones, land distribution has been stalled since DAR personnel, especially surveyors, could not work in the field due to the quarantine rules imposed in the face of the coronavirus pandemic.

“Once these quarantine protocols are eased, our personnel will do fieldwork once again and we will continue with the land survey,” he said.

Through the Balik Probinsya program, various government agencies are tasked with creating opportunities for returning migrants to help decongest Metro Manila at a time of a global pandemic.

“Giving a piece of farmland to those who will return to their provinces is DAR’s way of helping them [get livelihood opportunities],” Castriciones said.

He said the DAR had realigned about P300 million from its different programs to extend support for farmers and organizations of agrarian reform beneficiaries.

He also said that the DAR was facilitating a housing program, called “Balai Magsasaka,” for farmers.

Palayan City Mayor Adrianne Mae Cuevas said problems on land ownership still existed in this capital city, but the local government was working to have these settled.