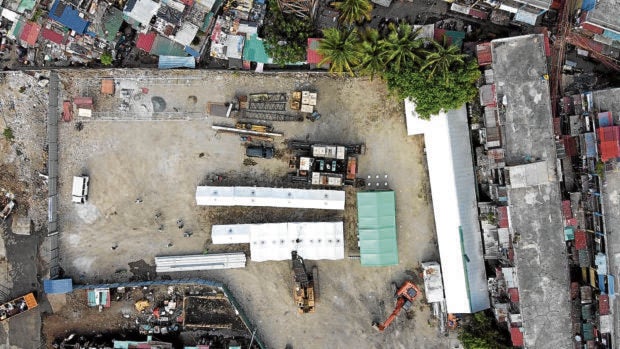 GROUNDBREAKING SITE An empty lot at Vitas in Tondo District, Manila, will be the site for two 15-story buildings—a housing project that will house families living in the city’s biggest slum area. —Manila PIO

MANILA, Philippines — The local government of Manila on Monday broke ground for “Tondominium” 1 and 2  — two public housing projects aimed at providing decent housing to residents “living in the middle of the streets” for decades.

The two buildings worth almost P1 billion will rise at Vitas in Tondo district, the city’s biggest and most densely populated slum area that has been home to former Smokey Mountain residents since the 1990s.

“Today is the start of the new era, the new beginning that in every open space that we can make available, it will be built with housing in the City of Manila,” Mayor Francisco “Isko Moreno” Domagoso said during the groundbreaking ceremony.

According to the city’s public information office (PIO), the event also kicked off the local government’s construction projects under its #BuildBuildManila program.

Construction of the Tondominium buildings, which will have 15 stories each and span approximately 662.4 square meters per floor, will take about two years, according to the PIO.

They will be able to accommodate about 336 families in 44-sq.-m units that will have two bedrooms each.

Among the next projects under the #BuildBuildManila program are Binondominium, Bagong Ospital ng Maynila and Bagong Manila Zoo.

“We will end the long period of living in the middle of the streets, highways, along seasides and rivers. There is hope,” Domagoso said.

“We will not stop [our projects] … True, we are facing challenging times today but we will not stop moving on. We will face [the new coronavirus disease] together,” he added.

Palace distances self from Facebook’s purge of propaganda accounts