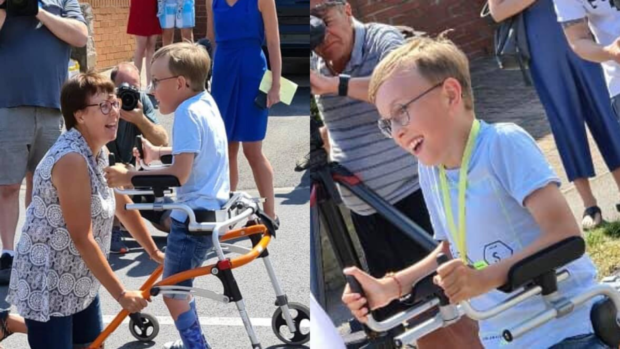 A 9-year-old boy with cerebral palsy and autism finished a marathon using a walking frame to raise funds for a children’s hospital and his school.

Tobias Weller completed the 42-meter walk over 70 days on a street outside his house in Sheffield, England, as per BBC yesterday, May 31.

Police also sectioned off the said street for the final 750 meters that Weller walked yesterday.

When Weller completed the last stretch of his walk, he received cheers from his neighbors. Sheffield Children’s NHS Foundation Trust posted a clip from the event on Twitter.

Weller’s initiative was inspired by World War II veteran Tom Moore, a captain who served in India. Moore raised over $15 million (over P762 million) for charities last April by walking the length of his 25-meter garden 100 times.

The amount raised will be given to Paces School where Weller attends classes, and to the Sheffield Children’s Hospital through its emergency COVID-19 appeal.

Following the end of his marathon, Weller’s mother Ruth Garbutt said she was “bursting with pride” for him.

“He’s tried so hard all the way through,” she was quoted as saying. “He’s really achieved a massive goal.”

Meanwhile, Weller expressed that he “can’t believe” he completed the marathon.

“It’s just awesome,” he said in the report.  “l love it when my [neighbors] clap and cheer for me and getting stronger and stronger every day is such a good feeling.”

After the success of Weller’s fundraiser, Garbutt stated that they still plan on walking and set a new goal of 50 kilometers. Ryan Arcadio/JB

WATCH: ‘Lord of the Rings’ cast reunite via video call to raise funds for COVID-19 relief