After the modified enhanced community quarantine (MECQ) period ended in the National Capital Region Sunday, more workers were allowed to report back to work in both public and private sectors.

The two innermost (left) lanes of Edsa were cordoned off for public utility buses operating under the Department of Transportation’s (DOTr) bus augmentation program, as shown by a video tweeted by Philippine Daily Inquirer reporter Krixia Subingsubing.

A number of bikers were likewise spotted along  EDSA and other major thoroughfares.

Cyclists struggle with the absence of bike lanes along Edsa, despite this being the only mode of transport available for some workers. MMDA general manager Jojo Garcia said they do not allow bikes on Edsa in general yet, pending plans for a protected bike lane on the highway. pic.twitter.com/WvQYjsughv 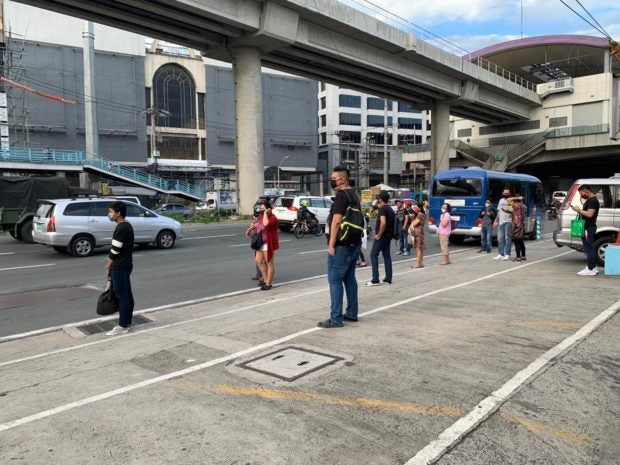 Passengers waiting for a ride along Marcos Highway corner Gil Fernando Avenue in Marikina City on Monday morning—the first day of the implementation of the general community quarantine in Metro Manila—observe physical distancing rules part of health protocols against the spread of the coronavirus disease. (Photo by Abel Ulanday/INQUIRER.net)

The DOTr said the resumption of operations of mass transportation systems will be a two -phase process, with the first one to start Monday.

Tricycles will also be allowed to operate during Phase 1 but subject to prior approval of the concerned local government unit (LGU), the DOTr added.

“In Phase 1, no provincial buses will be allowed to enter Metro Manila,” it added.