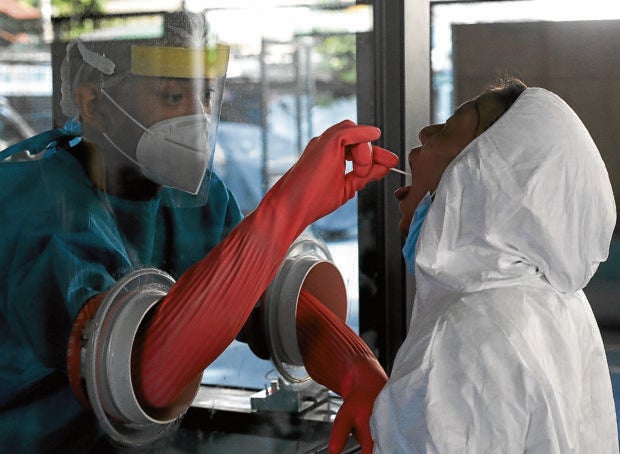 MEDICAL WORKER TESTED A hospital worker undergoes a swab test at the Ospital ng Sampaloc in Manila. —RICHARD A. REYES

MANILA, Philippines — The Department of Health (DOH) on Sunday drew flak from lawmakers and a local official for apparently playing down the extent of the new coronavirus epidemic in the Philippines by claiming that most of the hundreds of recently confirmed infections were just “late cases” and that the drop in “fresh cases” indicated the government’s success in containing the contagion.

The lawmakers also warned that the loosening of quarantine restrictions in Metro Manila starting Monday could lead to a wider spread of the new coronavirus that causes the severe respiratory disease COVID-19.

On Friday, the DOH explained that the sudden surge of coronavirus infections in recent days did not mean the epidemic was getting worse, but that the agency was adding to the report the validated results of positive tests taken earlier.

Of the 539 new cases reported on Thursday, for instance, it said only 109 were “fresh,” or from the last three days, and the rest were “late,” or validated positive results of tests from the past week. Of the shock 1,046 new cases on Friday, it said, only 46 were fresh and the remaining 1,000 were late.

It was a new take on the DOH’s previous explanation that it was catching up with its backlog, and that the diminishing number of new infections meant the government was managing the spread of the virus well.

Sorsogon Gov. Francis “Chiz” Escudero, a former member of the Senate, said the decision of the DOH to use new terms in defining coronavirus infections was nothing but “ego saving devices.”

“Please don’t fudge the figures, fool yourselves [and us too],” Escudero tweeted, using the hashtag #nopoliticswithhealth.

“The first step in finding a solution to a problem is admitting [to begin with] that we have a problem,” Escudero added.

“The growing public sentiment amidst the conflicting and confusing public pronouncements is that our citizens have been left to fend for themselves,” Sen. Francis Pangilinan told the Inquirer in a Viber message.

“Sadly, the government’s response thus far three months into the pandemic, and the continued rise in coronavirus cases, the absence of mass testing and the allegations of corruption and overpricing, altogether do not inspire confidence,” he said.

Asked about the DOH’s claim that the lower number of “fresh cases” would “provide… a more accurate picture” of the health crisis in the country, the opposition senator said: “The leadership in the DOH is part of the problem.”

‘Not completely honest before’

Sen. Panfilo Lacson said the changes in the DOH’s reporting of coronavirus cases showed that health officials had not been forthright in disclosing the real data to the public.

“There is no way around the real COVID-19 situation in the country. Now that the backlogs are being corrected, expect things to get ugly before they get better,” Lacson said in a Twitter post.

“One thing is certain: They were not completely honest in their daily situation report before,” he said bluntly.

Sen. Risa Hontiveros said the work-from-home arrangements, mass testing, procurement of safety equipment for front-line workers in hospitals and improved coordination with local governments should be pursued now that quarantine restrictions in Metro Manila were being eased.

“My fear is that the easing of the quarantine may expose thousands of Metro Manila workers and residents to a new wave of community transmission,” Hontiveros cautioned.

For Sen. Sherwin Gatchalian, the public should be more responsible by observing safety guidelines such as wearing protective masks, keeping physical distance from one another and avoiding large gatherings.

“Let’s be realistic. The intended testing capacities will not happen as scheduled,” Gatchalian said. “The responsibility rests on us.”

On Sunday, the DOH reported 862 new infections—16 fresh and 846 late—raising the total to 18,086. It said recoveries totaled 3,909 with the recovery of 101 patients. The death toll, however, increased to 957 with the deaths of seven more patients.

Vice President Leni Robredo called on the DOH to expedite the accreditation of testing laboratories to speed up the turnaround of tests.

“If they speed up the accreditation, we may not need these new classification of ‘fresh’ and ‘late’ cases, and the results will be given as soon as possible,” Robredo said on her radio program on Sunday.

As of May 28, according to information from the DOH, there were 37 accredited laboratories nationwide that could conduct real-time reverse transcription polymerase chain reaction (RT-PCR) tests to detect the new coronavirus.

There were also 11 licensed GeneXpert laboratories with faster testing capability.

—WITH REPORTS FROM JHESSET O. ENANO AND TINA G. SANTOS