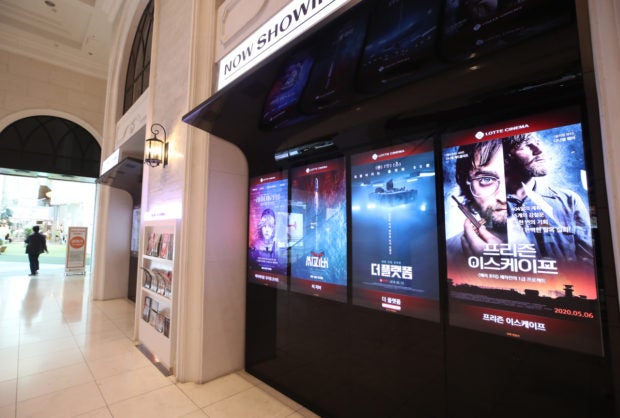 SEOUL — Though fears concerning the novel coronavirus persist among the public, the film industry is ushering people to cinemas with discount coupons for movie tickets.

The Korean Film Council, a state-funded institution, will be giving out discount coupons for movie tickets over a three-week period starting Monday, as part of its measure to revive the industry now staggering from the impact of the coronavirus pandemic.

Cinemagoers will be able to receive a 6,000 won ($4.90) discount per movie ticket, according to the KOFIC’s announcement made last week. The discount coupons, which will allow theatergoers to watch movies at about half-price — average movie tickets priced around 10,000 won here — are applicable only for films screened Thursday through Sunday.

The three biggest multiplexes — CGV, Megabox and Lotte Cinema — will distribute the coupons through their respective websites, with two coupons limited to each person per week on a first come, first served basis.

Another multiplex operator, Cine Q stated anyone who reserves tickets will get the discount within the period. Four tickets are allowed per person per week. A share of the discount coupons will also be allotted to smaller local or independent cinemas in the country, the state agency stated.

The discount event was originally slated to kick off as a post-COVID-19 support measure for the film industry around May 21, in line with the government’s easing of social distancing rules in early May. However, with the sudden eruption of mass infections stemming from the Itaewon area in Seoul, the promotion was postponed.

According to agency, the number of cinemagoers in April dropped by around 94 percent compared to the same month last year, and overall sales for the film industry this year are expected to drop by as much as 70 percent compared to 2019. Around 75 new films have postponed releases this year due to the pandemic.

Meanwhile, some in the public remain skeptical about returning to theaters, as the government recently reinstituted strict physical distancing guidance until June 14, following fresh outbreaks of cluster infections at large workspaces in the Seoul metropolitan area last week.

Nevertheless, as several new commercial films are to hit theaters in the coming weeks, others are anticipating for the film industry to get back on track. KOFIC has reassured that safety measures will be followed for theaters, including checking temperatures, distanced seating and a strict quarantine system inside the halls.