UNITED STATES — Donald Trump came to Florida on Saturday to witness the dawn of a new space age. But not everyone in America had their eyes to the sky.

As Trump witnessed the successful launch of American astronauts into space from US soil for the first time in nine years, the anger aroused by the death of an unarmed black man — George Floyd — during his arrest by police shook the country from coast to coast.

On the Air Force One flight to Florida, two screens showing Fox News — the presidential channel of choice — in the press area at the back of the plane summed up the extraordinary day.

Scenes of violent anti-police protests in Minneapolis, where Floyd died, alternated with shots of intense preparation and scientific excitement at the iconic Kennedy Space Center.

Trump himself flicked between the subjects throughout the day. Just before landing, he tweeted about the “rioters” in Minneapolis, adding that 80 percent of them were not from Minnesota.

Three minutes later, in an enthusiastic message, he expressed his hope that the SpaceX launch would be a resounding success.

The Kennedy Space Center is steeped in history: it is from here that Neil Armstrong and his Apollo 11 crewmates took off on July 16, 1969 for a flight that would see them become the first people to walk on the Moon.

Trump, arriving about 15 minutes before Saturday’s liftoff to a small platform set up for him to witness the launch, savored the historic moment.

Wearing his emblematic red tie — the same one he almost always wears at campaign rallies — he smiled at journalists and gave them the thumbs up.

Relaxed, he finally turned to look at SpaceX’s Falcon 9 rocket and Crew Dragon capsule carrying the two NASA astronauts, with Vice President Mike Pence at his side. 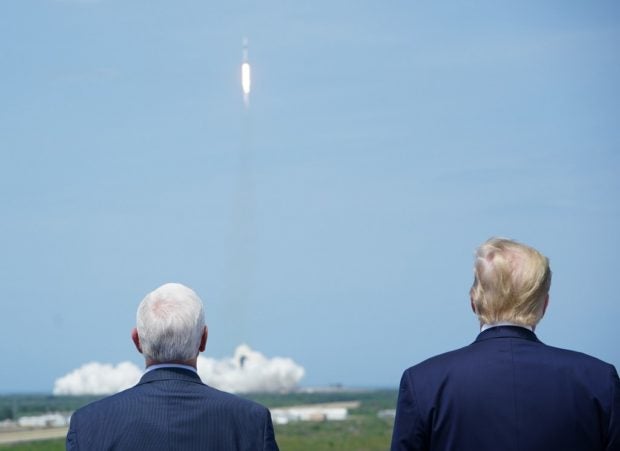 US Vice President Mike Pence and US President Donald Trump watch the SpaceX Falcon 9 rocket carrying the SpaceX Crew Dragon capsule, with astronauts Bob Behnken and Doug Hurley, lifts off from Kennedy Space Center in Florida on May 30, 2020. – Trump travels to Kennedy Space Center in Florida to watch the launch of the manned SpaceX Demo-2 mission to the International Space Station. (Photo by MANDEL NGAN / AFP)

The ground shook. The emotion was palpable. As the rocket vanished into the upper reaches of the atmosphere, the president turned to journalists and applauded, then started talking.

“All of a sudden you hear that roar and it’s incredible, the power,” he said with a smile.

“You wouldn’t think that machine — as big as it is, it looks small from here — could have that kind of power to make that kind of sound or that vibration.”

He praised American ingenuity, stating: “America will always be first.” He spoke of the future, of an expedition to Mars.

With five months to go before the presidential election where he will vie for a second four-year term, he insisted this flight full of promise will be one of the markers of his presidency.

He did not salute the efforts of his two predecessors, George W Bush and Barack Obama, who launched the program to contract spaceflight out to the private sector. The SpaceX launch is the end result of years of work.

Only two US presidents had attended a launch before Trump: Richard Nixon in 1969 and Bill Clinton in 1998.

The reason is two-fold: the risk of cancellation at the last minute due to weather, and the risk of being associated with terrible images if the venture goes wrong.

The bet paid off for Trump, who returned to Florida for the day after a first abortive launch attempt on Wednesday.

As he began his speech from the space center, he returned again to the death of Floyd, saying he understood “the pain that people are feeling.”

He strongly condemned the violence that has broken out over four nights of protest since Floyd’s death, and denounced the “looters and anarchists” who sowed violence, calling for “healing not hatred, justice not chaos.”

But on his return to Washington, he knows he will have to find a deeper, long-term response to a crisis in a country where old wounds that never healed have been freshly torn open.

After several days of sending contradictory signals, the 45th president of the United States will have to find the right tone to ease tensions.

His words will be scrutinized. For his detractors, as for many observers of American life, he has for years been playing a dangerous game on race.