MANILA, Philippines — Hundreds of thousands of employees in Metro Manila who plan to take public transportation when they return to work on Monday should prepare for a possibly longer trip than what they were used to before the COVID-19 pandemic, especially on Edsa.

If they don’t take a taxi or book a car through Grab, the only rides available would be the Metro Rail Transit 3 (MRT 3) and several hundred buses running at reduced capacities.

The Department of Transportation (DOTr) hastily rewrote transport regulations to maintain health measures to prevent the spread of SARS-CoV-2, the virus that causes COVID-19, when Metro Manila goes into general community quarantine (GCQ) on June 1 after the more strict enhanced community quarantine.

Commuters should expect long queues before getting on the MRT 3 or a bus as authorities will strictly impose physical distancing even at the train stations and bus stops.

MRT 3 will be allowed to carry only 12 percent of its regular passenger load and the buses 50 percent.

Passengers of Light Rail Transit 1 (LRT 1) along Taft Avenue and LRT 2 which runs above Aurora Boulevard in Quezon City and Magsaysay Avenue and CM Recto Avenue in Manila should also expect extended waiting time as they also will run at 12 percent capacity. Buses along those routes will be allowed, but also at 50 percent capacity.

The jeepneys will not be allowed anywhere in the metropolis and motorcyle-hailing rides like Angkas will also be banned.

Officials are still studying how physical distancing could be enforced in jeepneys before they are allowed back on the road, according to presidential spokesperson Harry Roque.

“That will be studied because there are jeepney prototypes where passengers can only occupy every other seat. If all jeepneys could change their seats to allow this, the IATF (Inter-Agency Task Force on Emerging Infectious Diseases) would study it,” he said at the Laging Handa briefing on Saturday.

About 300 to 500 buses would be allowed on Edsa, down from around 3,000 before the pandemic prompted authorities to stop all public transportation in the national capital on March 17.

These buses will be moved from the outer lane to the inner lane alongside the MRT 3 line and will make only four stops for the next three weeks—at North Avenue, Quezon Avenue, Ayala Avenue and Taft Avenue.

Passengers will have to cross Edsa to get to the sidewalk from the bus stop.

Other motorists on Edsa should expect traffic to halt or slow down at these pedestrian crossings.

“Our strategy here is gradual, calculated and partial,” Transportation Secretary Arthur Tugade said on Friday. “We are not rushing [to revive the system all at once]. We have to balance the safety and health of the people.”

One Edsa commuter is leery about the new transport setup.

Before the pandemic, Christelle Lyn Peralta, 22, took a point-to-point bus from her home in Plaridel, Bulacan, to North Avenue where she’d ride the MRT 3 to Shaw Boulevard, where she works at a drug store.

“Our operations didn’t actually stop during [the enhanced community quarantine period],” Peralta said. “But a lot of us, including myself, weren’t able to go to work because we had no means of transportation.”

Now that Manila is reopening its borders again, Peralta is anxious about commuting as provincial buses are still not allowed to enter Metro Manila.

She told the Inquirer that she may request her parents to drive her to work on Monday. She then plans to stay with a friend in a dorm or join some of her fellow employees who had taken quarters in the drugstore to avoid being late for work. 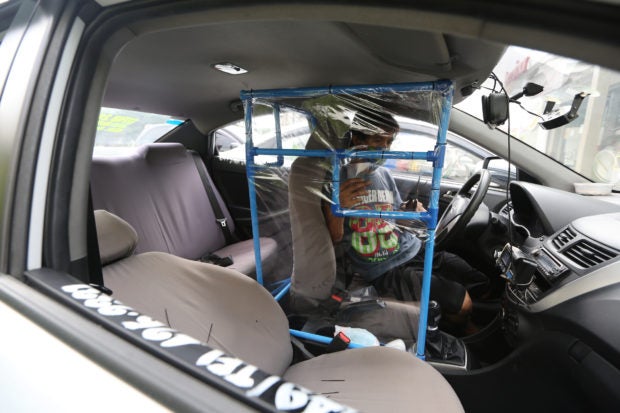 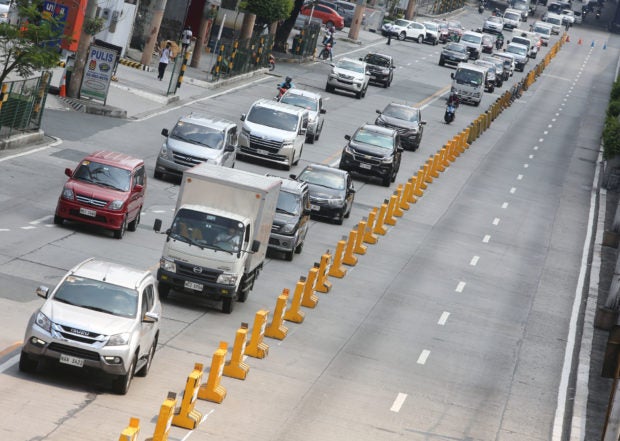 BACK TO WORK Edsa, Metro Manila’s main road, will be reconfigured to move passenger buses to the inner lane as part of new measures as hundreds of thousands head back to work on Monday. Transport officials say physical distancing will be maintained in all public transport vehicles, including this taxi whose driver hopes to be protected from any coronavirus infection from his passenger. —NIÑO JESUS ORBETA AND MARIANNE BERMUDEZ

“I don’t think a lot of the plans of DOTr is feasible. Many commuters are bracing for an even harder commute on June 1,” she said.

To further avoid any physical contact between passenger and driver, the Land Transportation Franchising and Regulatory Board (LTFRB) advised the public to adopt cashless fare payments.

According to the board’s Memorandum Circular No. 2020-18, which set guidelines for public utility vehicles during GCQ, only taxis, buses or jeepneys capable of cashless transactions would be given a special permit to operate during this period, said LTFRB chair Martin Delgra.

Fares could be paid with the digital wallet apps GCash, Paymaya and Squidpay and AF Payments, the concessionaire for the beep cards used for the three commuter trains.

Passengers must enroll with any of these apps. Taxis and transport network vehicle services like Grab are already capable of implementing this on the first day of GCQ.

Passengers should expect to be asked for their contact details during their commute as PUVs are required to keep daily record to aid contact tracing.

But going cashless does not necessarily mean life would be easier for taxi drivers, who shared their concerns in a Facebook group.

One driver named Arthur lamented that using digital wallets would mean having no cash to buy food or other needs for a week as it takes that long for an app to disburse actual cash to the users.

Grab, which will resume operation on Monday, said it was prepared to mobilize 20,000 drivers but was allowed only 2,025 by the LTFRB.

The company requested the LTFRB to increase the number “on behalf of both the drivers and the commuting public who are working to deliver much-needed services to our kababayans amidst the pandemic and an embattled economy.” There was no immediate response from the board.

On Friday, the DOTr gave the Metropolitan Manila Development Authority (MMDA) P33 million to fund the “transformation” of Edsa.

The plan was to erect 11 bus stops initially, but only four could be completed in time for Monday. Fifteen more stops are to be built starting June 21.

Construction of the 1.5-meter-wide bike lane on the former bus lane of Edsa will start on Monday and is expected to be finished on June 21.

“All these plans will be long-term projects,” said MMDA general manager Jojo Garcia. “Still, don’t expect that once we wake up on Monday everything would have been changed. This is a slow and gradual process. Let us remember that the general community quarantine means we’re still under quarantine, so we urge everyone not to forget what we are dealing with.”