DAVAO CITY—-Three vehicles of the International Committee of the Red Cross (ICRC) on humanitarian evacuation mission were stopped at a police and Army checkpoint in Lianga, Surigao del Sur on Friday.

Captain Al Anthony Pueblas, spokesman of the Army’s 4th Infantry Division, said the convoy was “intercepted” in Barangay Payasan at around 10 a.m.

“They were briefly detained and allowed later to proceed to Davao Regional Medical Center in Tagum,” Pueblas said.

He identified the two persons being evacuated as Jea Angeles Perez, 22, of Barangay Puyat in Carmen, Surigao del Sur, and Noel Dadang, 32, with no known address.

Both had gunshot wounds; Perez on her right leg while Dadang on his left rib and parietal area.

Pueblas said the ICRC team got the patients in Barangay Janipaan of San Agustin town, a known stronghold of the New People’s Army (NPA) in Surigao del Sur.

Pueblas added that there is a high probability the individuals were part of the NPA unit government troops engaged in a series of gun battles from May 14 to 19. 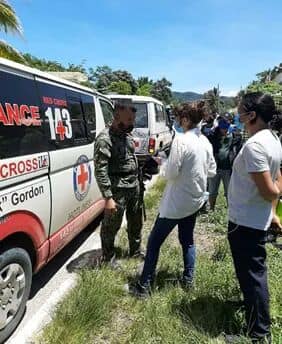 The military claimed that the recent hostilities resulted in the death or injury of at least 20 cadres of the NPA’s North-Eastern Mindanao Command based in the Andap Valley complex in Surigao del Sur.

She said that to facilitate safe passage, the Army and police were informed of the humanitarian evacuation before they transported the two wounded persons.

In the coordination process, according to an ICRC statement, all parties to a conflict are given prior notice about their movements which include medical evacuations.

“This medical evacuation was carried out strictly for humanitarian purposes. As a neutral, impartial and independent humanitarian organization, the ICRC’s mandate is to protect and assist victims of armed conflict. Under the International Humanitarian Law, wounded and sick fighters regardless of which side they are from are entitled to the medical care and treatment required by their condition,” the ICRC said.

However, the ICRC or Philippine Red Cross “will not interfere arrests by the authorities, but we will ensure that the patient receives medical treatment,” Lopez explained.

She emphasized that the evacuation was carried out strictly for humanitarian purposes.

Pueblas added that the patients are now being treated at the Davao Regional Medical Center in Tagum City, with policemen posted outside their respective rooms.

International law expert Camilo Montesa said the police and Army may have violated the Rules for Combatants of the Armed Forces of the Philippines’ Handbook on Discipline.

Montesa said Army and police are forbidden from attacking the persons, vehicles and installations which are protected by the Red Cross sign.