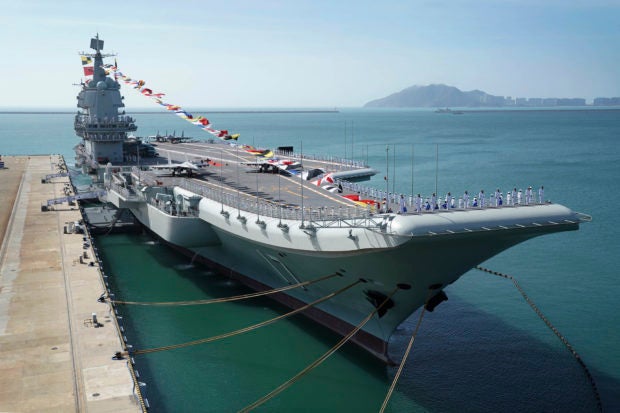 In this Dec. 17, 2019, file photo provided by Xinhua News Agency, the Shandong aircraft carrier is docked at a naval port in Sanya in southern China’s Hainan Province. China’s Defense Ministry said Friday, May 29, 2020, the navy’s only entirely home-built aircraft is carrying out sea trials to test weapons and equipment and enhance training of the crew. (Li Gang/Xinhua via AP, File)

BEIJING — China’s Defense Ministry said the navy’s only entirely home-built aircraft is carrying out sea trials to test weapons and equipment and enhance the training of crew.

Ministry spokesperson Ren Guoqiang said Friday the exercises were being conducted as planned, apparently unaffected by the country’s coronavirus outbreak.

The Shandong’s commissioning last year by Chinese President Xi Jinping underscored the country’s rise as a regional naval power at a time of tensions with the U.S. and others over trade, Taiwan and the South China Sea.

It is the second Chinese aircraft carrier to enter service after the Liaoning, which was originally purchased as a hulk from Ukraine and entirely refurbished.

Both are based on a Soviet design with a “ski jump” style flight deck for takeoffs rather than the flat decks used by much larger U.S. aircraft carriers. It is powered by a conventional oil-fueled steam turbine power plant, compared to the nuclear fuel American carriers and submarines use.

China is seen as striving to overtake the U.S. as the dominant naval power in Asia and already boasts the world’s largest navy in numbers of vessels.

Beijing said aircraft carriers are needed to protect its coastline and trade routes, but they are also seen as backing up its claims to self-governing Taiwan and the South China Sea.

The highly secretive Chinese military was credited with aiding in the response to the epidemic in the epicenter of Wuhan earlier this year, but no information has been released about cases among military personnel or any change in the armed forces’ readiness status.

The U.S. Navy, in contrast, saw a public controversy over the spread of the coronavirus aboard the USS Theodore Roosevelt and the firing of the aircraft carrier’s skipper in April.

The Roosevelt was operating in the Western Pacific when the first crew members fell sick in late March. About 1,100 crew members eventually tested positive for the coronavirus and one died. The ship was sidelined on Guam for nearly two months.