MANILA, Philippines – A graduating son from the University of Santo Tomas (UST) has done his parents proud by finishing his bachelor’s degree in Accountancy with Latin honors.

His surprised mom, Helen Abaday, could not help but cry as she hugged him, as seen on the video.

In an interview with INQUIRER.net, Abaday said that accountancy was really his first choice among the college programs to take as he “loves dealing with numbers, but not necessarily Mathematics like in engineering.”

(Also, I remember when I was a kid, I asked my parents which work makes the most money, and they said it is accountancy. It has a lot of computation of money but is not mine, and that thought stayed in my mind.)

(They also say that when you are an accountant, you just have to sign and then you will have money already, but in real life, it is not all that.)

Abaday would also want to take the Certified Public Accountant Licensure Examination (CPALE) afterward, but given the situation today due to the threat of the coronavirus pandemic (COVID-19), he said he might probably take the exam next year. After boards, he would like to work as an external auditor.

Throughout his five years in college, Abaday’s parents have been his inspiration. 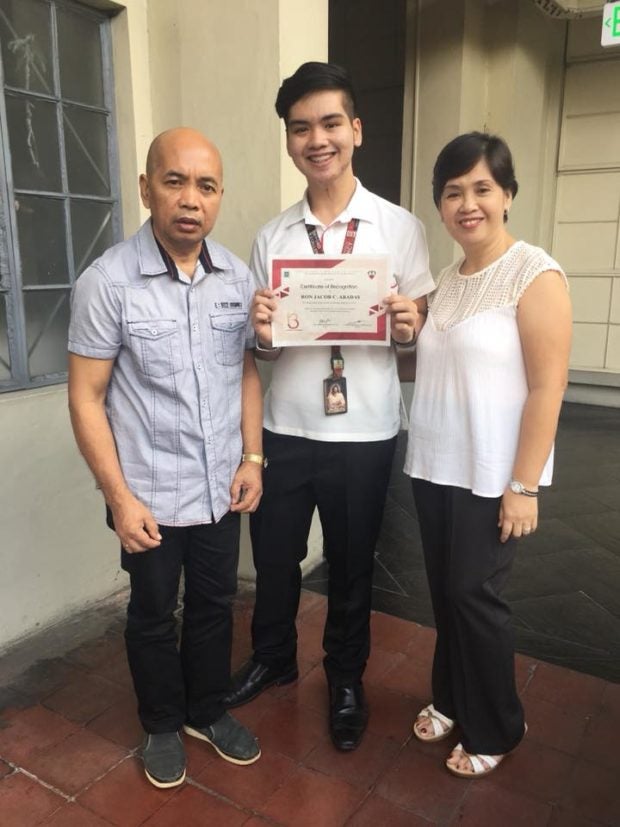 (In this way, I thought that I could at least bring back their hardships to support us, five siblings.)

Most of his struggles in academics include failing some examinations, even the major ones, to the point where he just had to cry inside the campus’ chapel knowing he gave his best, but maybe “it was just not enough.”

Meanwhile, Abaday said he is also thankful for those down moments, for it made his success more worth it.

He also considered the pandemic as part of their struggles as they had to switch to online classes, “Our internet connection is not stable, but by God’s grace, I still got to finish my studies.”

Apart from it, he thanked his Mommy Helen and Daddy Lando Abaday for their hardships and sacrifices, “Hindi sapat ang mga salita para ma-express ko yung pasasalamat [ko] sa inyo. Thank you rin po kasi inilapit niyo kami kay Lord kasi yung faith kay Lord lang din yung pinanghawakan ko sa 5 years ko sa college. (Words are not enough to express how grateful I am to you. I also thank you for bringing us closer to the Lord because my faith in Him was the one I hold onto in my 5 years in college.)”

As mass gatherings, including graduation ceremonies, are still suspended, Abaday said the earliest possible date of their graduation is in December, depending on the situation of the country in the fight against the COVID-19 pandemic.