Only 160 passengers per train at LRT-2 during ‘new normal’ 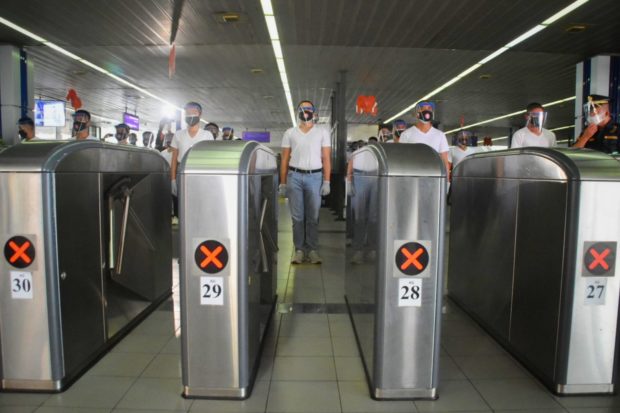 LRTA and NCRPO personnel conduct simulation exercises to prepare for the “new normal” protocols in LRT-2 on Wednesday, May 27, 2020. Photo from NCRPO PIO

Based on the LRTA guidelines, the Passenger Distribution Control Protocol would be implemented in order to prevent mass gathering inside trains. LRTA manages LRT-2.

“Passenger Distribution Control Protocol – only a total of 160 from the original 1,600 passengers will be accommodated per platform to give way to the implementation of an effective crowd control procedures,” explained the LRTA  guidelines.

Banners, posters, and other visual aids would likewise be put up to inform passengers about health protocols at LRT-2 stations, LRTA noted.

LRTA further said there would be thermal scanners at the entrances of stations as well as disinfecting alcohol and hand sanitizers as each train would be disinfected once it reaches the last train station.

Simulation exercises on the implementation of the guidelines were conducted Wednesday by the National Capital Region Police Office (NCRPO) and LRT-2 management to prepare for the “new normal.”

“Public safety is our primordial concern. Our citizens will be needing public transport to go to work and other places and the LRT is one of the indispensable and fastest modes of transportation in Metro Manila,” Sinas said in a statement.

“Surely, most of our people will take this as an option for their daily transport. Hence, we are working in close partnership with LRTA to guarantee public safety should we finally come to the resumption of public transport,” he added.

Metro Manila has been under a modified enhanced community quarantine, which prohibits the operation of public transportation. Talks are ripe that the nation’s capital region might transition to a general community quarantine by June 1. Malacañang, however, has yet to release a decision on the matter but it is expected to do so within this week.