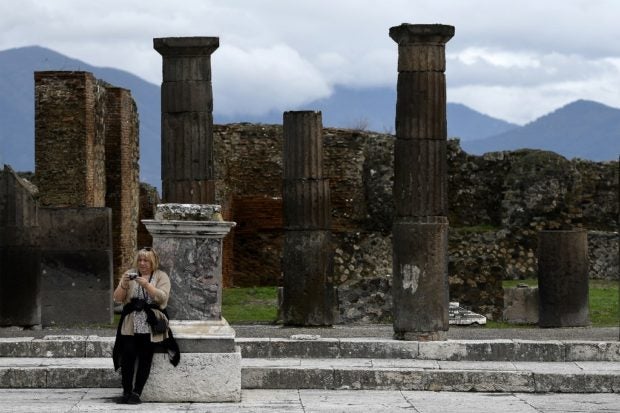 A visitor takes photos in the Roman Forum on November 25, 2019 in Pompeii. – While treasure hunters regularly pillaged Pompeii down the centuries looking for precious jewels or artifacts, whole areas have yet to be explored by modern-day archaeologists. (Photo by Filippo MONTEFORTE / AFP)

Pompeii, Italy – Italy’s world-famous archaeological site Pompeii reopened to the public on Tuesday as the country’s coronavirus lockdown was lifted – though there were more guides than tourists.

The exceptionally-preserved remains of an ancient city, covered in volcanic ash nearly 2,000 years ago after the eruption of nearby Mount Vesuvius, are usually the country’s second-most visited site after the Colosseum in Rome.

But on Tuesday its most iconic ruins, like the Amphiteatre, lay absolutely empty.

With foreign tourists still prohibited from travel to Italy until June, the site that attracted just under 4 million visitors in 2019 is hoping that for now, Italian tourists can make up at least a fraction of the difference.

Visitors will take a mandatory route, but a second itinerary will be added on June 9. Tickets cost five euros, but people will have to reserve ahead and have their temperatures checked by a thermal scanner on entering.

Among the first of the few through the gates Tuesday were an American couple from Detroit who had tried to visit just before the lockdown but found it closed. They have been staying in an Airbnb in Pompeii ever since.

“It’s now been almost three months,” Marvin Hewson said, adding that they had spent a lot of time looking at the ruins from the outside.

“It’s fantastic, well worth the wait to see them up close,” said his wife Colleen. 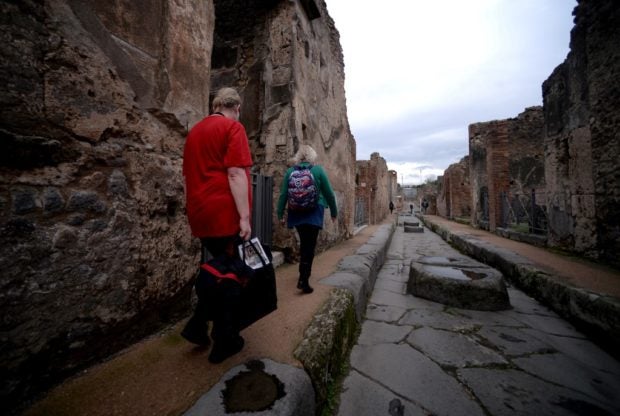 Visitors walk in a cobbled alley on November 25, 2019 in Pompeii. – While treasure hunters regularly pillaged Pompeii down the centuries looking for precious jewels or artifacts, whole areas have yet to be explored by modern-day archaeologists. (Photo by Filippo MONTEFORTE / AFP)

Not all were as chipper. Valentina Raffone, 48, who has been a guide at the site for some 20 years, said there was a “sense of emptiness, of sadness, of post-eruption (post-disaster).”

“It’s only us guides, and journalists,” she said, pointing to some 35 guides milling aimlessly around the entrance.

The site had just celebrated the culmination of a long $113 million (104 million euros) restoration when the coronavirus crisis-hit Italy and museums and cultural sites were closed in March.

The project, which began in 2012, was paid for largely by European Union funding and enlisted large teams of archaeologists, architects, engineers, geologists, and anthropologists. 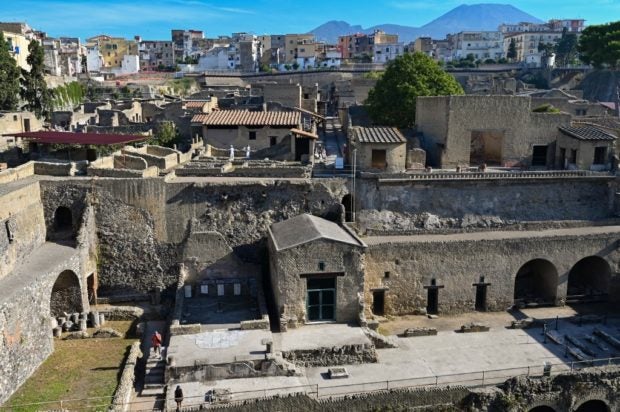 A general view shows ruins at the archaeological site of Herculaneum in Ercolano, near Naples, with the Mount Vesuvius volcano in the background, on October 23, 2019. (Photo by ANDREAS SOLARO / AFP)

The collapse of the “House of the Gladiators” after days of heavy rain in 2010 underscored the risk to Pompeii’s treasures after years of neglect and mismanagement. UNESCO warned that multiple buildings at the site were at risk and extensive restorations and consistent upkeep were needed.

New treasures seen by few tourists before the lockdown included the ancient frescoes and centuries-old tile floors of the “House of Lovers,” a two-story home that had been closed to the public since 1980 after an earthquake, and the “House of Orchards,” featuring intricately detailed frescoes of fruit trees and birds.

Earlier, in October, archaeologists discovered a vivid fresco of an armor-clad gladiator, his opponent gushing blood beside him, on the walls of what was believed to be a tavern housing the fighters and prostitutes.