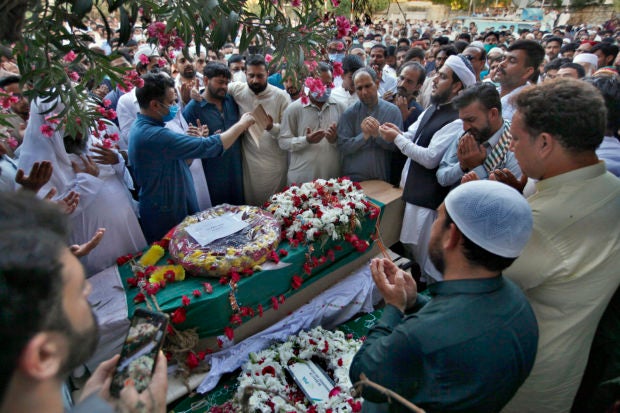 People attend the funeral for victims of the crash of a state-run Pakistan International Airlines plane on Friday near the southern port city of Karachi, in Rawalpindi, Pakistan, Monday, May 25, 2020. (AP Photo/Anjum Naveed)

KARACHI, Pakistan — Pakistan announced Tuesday that Airbus experts have opened a probe into last week’s plane crash that killed 97 people when an Airbus A320 went down in a crowded neighborhood near the airport in the port city of Karachi.

Initial reports have said the Pakistan International Airlines jet crashed after an apparent engine failure. Pakistani aviation authorities said Tuesday they have shared their initial findings with the visiting 11-member team from the European planemaker.

The Airbus experts and engineers are also to visit the crash site, according to Abdul Hafeez, a spokesman for PIA. “We are providing all possible assistance to the technical experts of Airbus,” he said.

Only two people on board survived the crash, including Zafar Masood, a bank executive.

Flight PK-8303 took off from the eastern city of Lahore and crashed on Friday while trying to land at the Karachi airport, Civil Aviation Authority spokesman Abdul Sattar Kokhar said.

On the ground, 18 homes were damaged but no one was killed, mainly because the local residents were gathered at nearby mosques at the time, officials had said. Eight people on the ground were injured.

So far, Pakistan has handed over 41 bodies to their families, Hafeez said, adding that DNA tests were underway to identify the remains of the other victims.

The plane made failed attempts to land at the Karachi airport before the crash. Authorities found the plane’s black box and have been guarding the crash site to facilitate the probe. The plane last received a government check last November. PIA’s chief engineer signed a separate certificate on April 28, confirming all maintenance had been conducted. Airbus has said the two-engine plane had logged 47,100 flight hours and 25,860 flights as of last Friday.

The crash took place days after Pakistan resumed domestic flights ahead of Eid al-Fitr holiday, which marks the end of the holy month of Ramadan. Many of the passengers aboard the flight were families returning home for the holiday.

Pakistan has been in a countrywide lockdown since mid-March because of the virus, and when flights resumed last week, every other seat was left vacant to promote social distancing. Authorities have reported over 57,700 cases of the virus, including 1,197 deaths.

ADVERTISEMENT
Read Next
WHO official: New number of COVID-19 cases in PH ‘kind of stabilized, a bit’
EDITORS' PICK
BAP: PH banks can withstand ABSCBN shutdown
World-standard accounting: Unlocking your financial potential
Early to tell if PH has reached ‘peak’ of COVID-19 outbreak — WHO exec
Water remains our saving grace right now
Defend Your Health! Shop health essentials from home with Rose Pharmacy’s Online Sale
DTI: Restaurants’ dine-in capacity to further expand, LGUs encouraged to move curfew time
MOST READ
Enchong Dee to Harry Roque for saying ‘move on’ from ABS-CBN shutdown: ‘You disgust me’
Defensor: ‘No problem’ with daughter expressing support for ABS-CBN
US rejects nearly all Chinese claims in South China Sea
‘I am not my father,’ says daughter of lawmaker who voted to deny ABS-CBN franchise
Don't miss out on the latest news and information.