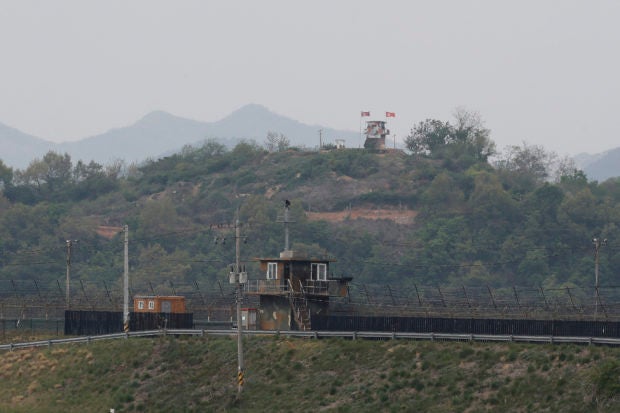 In this May 3, 2020, file photo, military guard posts of North Korea, rear, and South Korea, bottom, are seen in Paju, at the border with North Korea, South Korea. A U.N. investigation into a recent exchange of gunfire between the two Koreas has determined that both countries violated the armistice that ended the 1950-53 Korean War, the American-led U.N. Command said Tuesday, May 26. (AP Photo/Ahn Young-joon, File)

SEOUL — A United Nations investigation into a recent exchange of gunfire between the two Koreas has determined that both countries violated the armistice that ended the 1950-53 Korean War, the American-led U.N. Command said Tuesday.

The May 3 gunfire exchange was the first shooting inside the Korean Demilitarized Zone in about 2½ years, but there were no known casualties on either side.

The DMZ, which was established as a buffer at the end of the Korean War, is a de facto border separating North and South Korea. It is officially jointly overseen by North Korea and the U.N. Command.

The U.N. Command said in a statement that a multinational special investigation team led the probe with the full cooperation of the South Korean military. It said it invited North Korea to provide information on the incident but the country hasn’t offered a formal response.
The investigation ruled that North Korea breached the armistice by firing four rounds and South Korea by returning fire, according to the statement. It said the investigation was unable to determine if the North Korean rounds were fired intentionally or by mistake.

The U.N. Command said the terms of the armistice agreement are in place to minimize the risk of incidents such as gunfire exchange.

South Korean officials earlier said they fired warning shots toward North Korea after four bullets fired by the North hit one of its front-line guard posts.
Unlike its name, the DMZ is the world’s most heavily fortified border, guarded by mines, barbed wire fences, and combat troops on both sides. Gunfire exchanges inside the DMZ are not unusual, but no deadly clashes have occurred in recent years. About 28,500 U.S. troops are stationed in South Korea.

The recent incident came amid a deadlock in negotiations between North Korean and U.S. officials on the North’s nuclear weapons program.