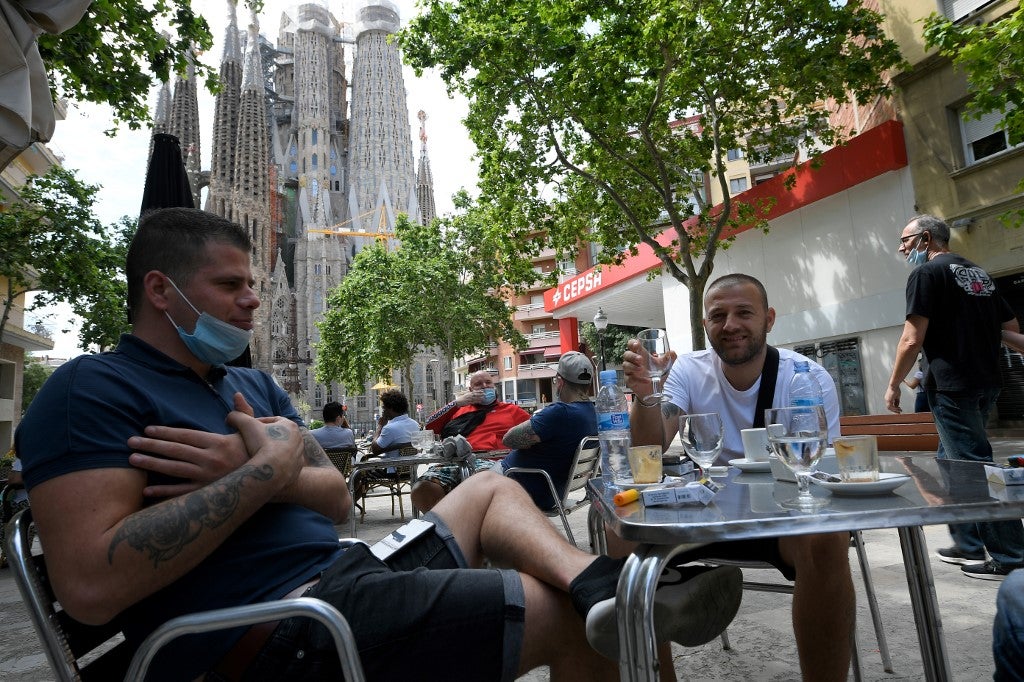 People sit at a terrace bar near the Sagrada Familia on 25 May, 2020 in Barcelona. – Hundreds of Madrid residents flooded to the city’s parks as lockdown measures were finally eased in the Spanish capital and in Barcelona, while beaches reopened in parts of the country after months-long closures. (Photo by LLUIS GENE / AFP)

Hundreds of Madrid residents flooded to the city’s parks and Barcelona’s bar terraces were full on Monday as lockdown measures were eased in Spain’s biggest cities and beaches reopened in parts of the country after months-long closures.

In the early morning, Madrid’s famous Retiro Park was filled with people out for a stroll in the sun, as scores of runners jogged down its wide avenues and past the boating lake.

Watching the fish in the lake with his Italian girlfriend, 29-year-old student David Modrego, said it was a pleasure to be outside.

“I’ve missed the open air, the smells of the park and seeing the trees. It’s very different from the view out of your window,” he told AFP, saying he lived in flat measuring just 30 square meters (323 square foot).

“It’s a really good feeling that the park is open again,” agreed gardener Maria Martin, 56, who was busy pruning shrubs in the spacious park.

But it was happiness tempered by the knowledge there were “still people between life and death in hospital,” she said as an ambulance roared up a nearby road, its siren blaring.

After 10 weeks of one of the strictest lockdowns in the world, Madrid, Barcelona and large parts of northwestern Castile-Leon region on Monday entered the first phase of a rollback which began two weeks in the rest of Spain.

These areas bore the brunt of the pandemic that has killed more than 28,700 people in Spain, meaning they were the last to enjoy an easing of the restrictions.

Now residents in Spain’s two largest cities can enjoy meeting friends and family in groups of up to 10 people in homes or at newly-reopened bar and cafe terraces — while strictly observing social distancing rules.

And across the country, the use of masks for everyone aged six and over is obligatory in public spaces where it is not possible to keep two meters (six feet) apart.

At the San Gines coffee shop, famed for its churros and chocolate, laid out six tables on the pavement, down from its normal 13 to ensure social distancing.

“Soon we’ll go back to being open 24 hours a day like before, but for now we’re not working nights as there are no tourists and because the nightclub that brings us a lot of clients is closed,” Daniel Real who works at the bar told AFP.

In Barcelona, most of the outdoor terraces had filled up in the popular Barceloneta neighborhood by 11:00 am, with people gathered around its carefully-placed tables.

At the seafront Barna Beach restaurant, Nacho Garcia said some of his staff were almost “in tears with joy” at the prospect of getting back to work after months shut up at home.

“We have to set up, clean, disinfect and then I have to talk to them about security measures, social distancing, hygiene.. and then we can start working,” said Garcia, sweating in the heat from the morning’s work.

Elsewhere, regions incorporating just under half of Spain’s nearly 47 million inhabitants were moving into phase two of the three-stage rollback that is due to be completed by the end of June.

With the summer heat picking up, beaches along Spain’s northern coastline as well as some areas in the south, including the Canary Islands and the Balearics, are now open for swimming.

For now, only locals will benefit, with travel between regions still forbidden and foreign arrivals required to undergo 14 days of quarantine.

But that measure will be lifted at the start of July, Prime Minister Pedro Sanchez said on Monday.

“The government will lift the quarantine requirement for foreign tourists from July 1,” he said after an interministerial meeting on tourism, a pilar of the Spanish economy.