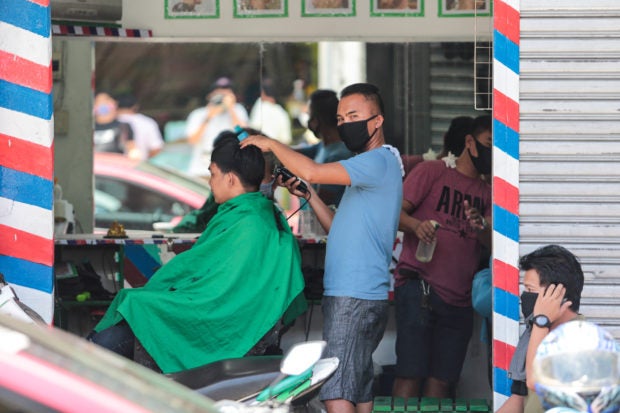 MANILA, Philippines — The Department of Trade and Industry (DTI) will come up with a universal system or protocol for the resumption of operations of salons, barber shops and dine-in restaurants  in areas under general community quarantine (GCQ) before June 15, 2020.

DTI Secretary Ramon Lopez on Tuesday said that the guidelines will, among others cover the managed volume of customers,  sanitation, temperature checks, sterilization of tools, and the cashless mode of payment.

The protocol will be subject to approval by the Inter-Agency Task Force for Infectious Diseases (IAFT).

(This is an attempt to allow workers in salons and barbershops to return to work.)

(When the system is approved by the IATF, we will release the protocol so that shops will be able to prepare. One week or at most two weeks. Assuming that we are under GCQ, maybe around June 7 or before June 15, they will be allowed to operate.)

The DTI is still studying whether barbershops, salons, and dine-in restaurants will have to undergo a local government unit accreditation process.

(The accreditation system may be difficult as many will apply. What can happen is the shops will have to follow the protocol and they will be audited after.)

The government started to ease up stringent quarantine protocols in most of the areas across the country except Metro Manila, Laguna province and Cebu City which remained under modified enhanced community quarantine (MECQ).

Many establishments offering personal care services such as salons and spas have remained shuttered under the different quarantine restrictions as physical distancing is required to prevent the spread of the novel coronavirus.