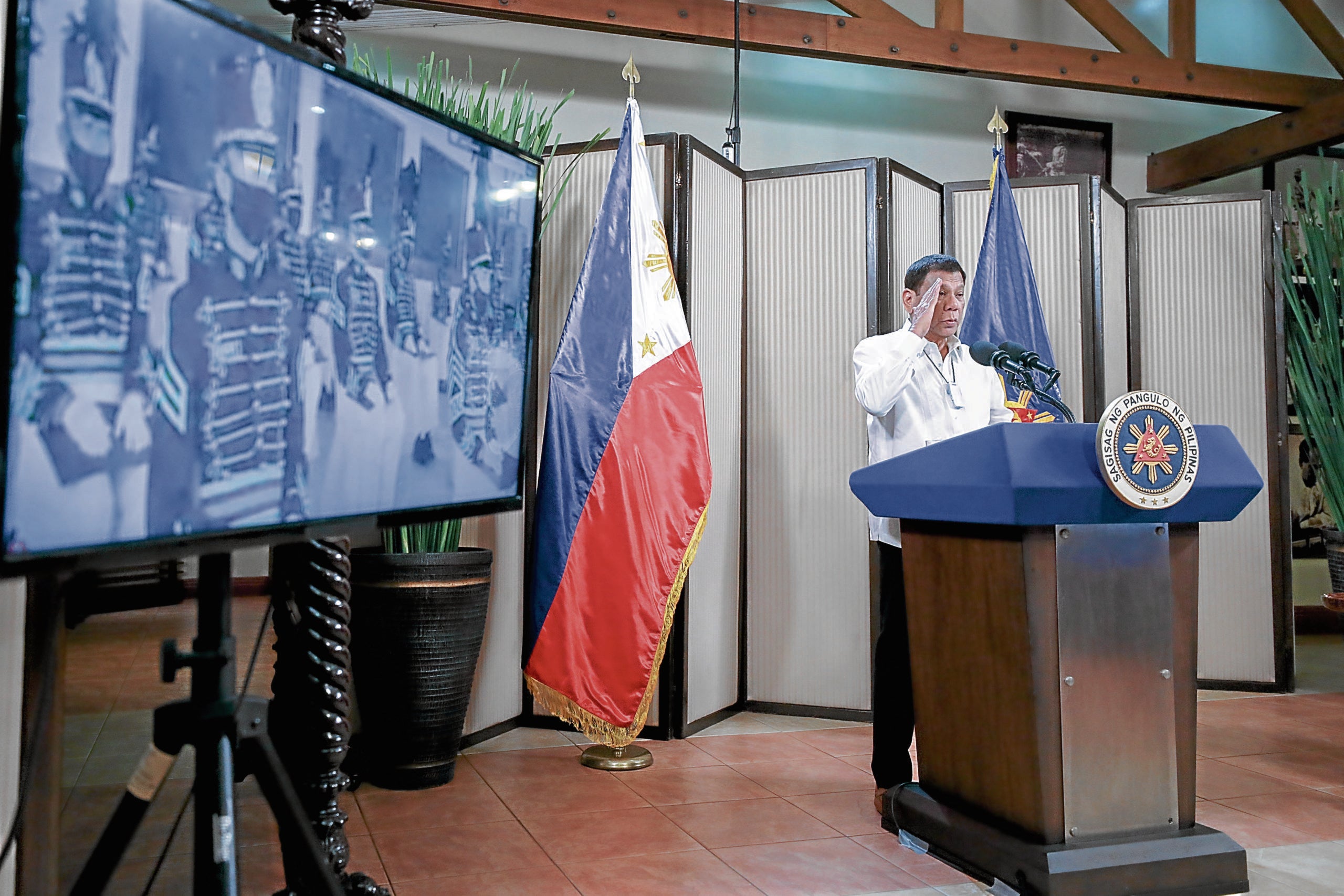 ONLINE CEREMONY President Duterte salutes this year’s graduates of the Philippine National Police Academy in Cavite province during his commencement address livestreamed from Malacañang in Manila. Health protocols set to contain the transmission of the coronavirus prevented the President from attending the ceremony on May 22. —MALACAÑANG PHOTO

The Philippine National Police Academy (PNPA) saw off this year’s graduates in a simple, “closed-door” ceremony last week as the coronavirus pandemic forced the academy to break many traditions in the premier police training institution in the country.

The 252 members of Mandayug Class of 2020 are set to join their law enforcement bureaus this week. Mandayug is coined from “Mga Alagad ng Batas na may Diwa at Simbolo na Yumayakap at Umaagapay sa Ginintuang Lahi.”

On Sunday, Lt. Col. Byron Allatog, PNPA spokesperson, said the orientation of the 205 gra­duates joining the PNP would be held at the PNPA in Cavite province, instead of holding it at the police headquarters in Camp Crame in Quezon City, to “minimize [people’s] exposure to the virus.”

Allatog said the Mandayug Class was the first PNPA class to graduate in May, after the academy last year adopted an academic calendar shift from June to August.

But the pandemic marked many other firsts in the academy, too, such as the cancellation of the annual graduation parade at the grandstand in keeping with physical distancing to prevent the spread of the coronavirus. Cadets in gala uniforms also had to wear face masks as they listened to President Duterte’s virtual speech flashed on a big screen in the gymnasium during their graduation on Friday last week.

No celebrations, no reunions

“It’s sad but we are all just very thankful that we have graduated,” said PNPA valedictorian, Lei Anne Palermo, now with a rank of lieutenant.

Palermo and 22 others are joining the Bureau of Fire Protection, while 25 graduates are going to the Bureau of Jail Ma­nagement and Penology.

Parents and relatives were not allowed to witness the graduation rites in Silang town, Cavite, on May 22.

To Palermo, she’d rather postpone a reunion since both her parents, retired soldier Norberto and retired nurse Li­lia, both 65, from Zamboanga City are at risk of contracting the virus.

“I’d rather not go home until this [pandemic] is over as I might become a [virus] carrier to my parents,” she said.

Before joining the academy, Palermo, 23, graduated with a degree in legal management at Ateneo de Davao University in Davao City.

“Zamboanga [City] is a relatively peaceful place except for that one incident—the Zamboanga siege in 2013,” she recalled. The 20-day fighting between members of the Moro National Liberation Front and government troops displaced 100,000 residents and forced several other families, like Palermo’s, to stay indoors for months.

Palermo likened the virus situation to the siege then: “We’re locked down, no classes and [school] requirements were only sent online.”

She said she was planning to pursue law after a year, which she believed would complement her profession as a law enforcement officer.

“I’ve always wanted to join [the PNPA] since I was in se­cond year [college]. My inspiration, of course, is my father who is a retired soldier,” Palermo said.In her valedictory speech, Palermo reminded officers of the “true value” of justice and integrity. She said public service should always be the “primordial concern” of every officer. —MARICAR CINCO INQ