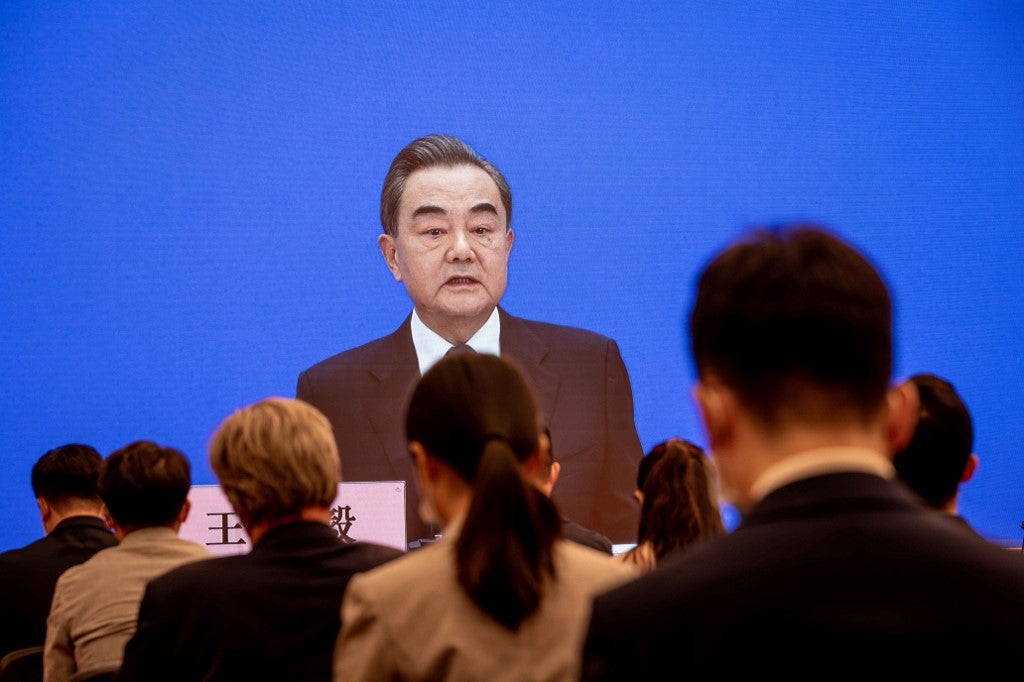 China’s Foreign Minister Wang Yi speaks during his online video link press conference during the National People’s Congress (NPC) at the media centre in Beijing on May 24, 2020. (Photo by NICOLAS ASFOURI / AFP)

BEIJING — China said Sunday that its relations with the United States were “on the brink of a new Cold War,” fuelled partly by tensions over the coronavirus pandemic that has killed nearly 350,000 people worldwide and pitched the global economy into a massive downturn.

Fresh tensions between Beijing and Washington emerged as virus restrictions continued to shape and remake lives around the world, and in very different ways.

They muted celebrations by Muslims of the end of Islam’s holy fasting month of Ramadan; and they produced a decidedly mixed picture on newly reopened US beaches, with masks common on some and drawing jeers on others. One jam-packed pool party in Missouri, footage of which went viral, was a joyful bedlam of bodies just feet or inches apart from each other.

More European nations meanwhile moved to ease their lockdowns, with virus trends improving and summer nearing. They loosened restrictions that have kept restaurants, bars and hotels shuttered, devastating tourism, and they moved toward reopening more schools.

Globally, more than 5.3 million people have been infected by the virus, which most scientists believe jumped from animals to humans — possibly late last year at a market in the central Chinese city of Wuhan.

US President Donald Trump has accused Beijing of a lack of transparency over the outbreak, suggesting the virus may have leaked from a top-security Chinese laboratory.

Chinese Foreign Minister Wang Yi said Sunday that Washington seemed infected by a “political virus” but that Beijing would nevertheless be open to an international effort to find the coronavirus source.

“Some political forces in the US are taking China-US relations hostage and pushing our two countries to the brink of a new Cold War,” Wang said.

While once hard-hit European nations relax lockdowns as they work to salvage battered economies, other countries such as Brazil are emerging as new centres of the pandemic.

Trump on Sunday suspended travel to the US by non-Americans leaving from Brazil. There was no immediate comment from the Brazilian government, run by Trump ally President Jair Bolsonaro, who has been dismissive of the virus and of lockdown measures.

The US death toll rose Sunday night to 97,686, according to the Johns Hopkins University tracker, with more than 1.64 million cases of infection. The US is by far the country worst hit in both categories.

Churches were reopening in some countries, Spain’s football league announced it would kick off again on June 8, and thousands flocked to beaches in Europe and the US.

With infection numbers stabilising in the West, many governments are moving gingerly towards lighter social distancing measures while keeping a wary eye out for a potential second wave of infections.

In Spain, Prime Minister Pedro Sanchez sought to reassure potential visitors, saying that from July 1, “entry for foreign tourists into Spain will resume in secure conditions.”

Italy is also due to reopen its borders to foreign tourists from June 3.

Cafes and restaurants in Greece were gearing to reopen on Monday — but only those with outdoor service.

Amid a patchwork of differing state regulations, most restaurants across Germany will be able to reopen on Monday.

Restaurants and bars and hotels will also reopen across the Czech Republic, and events with up to 300 people will be allowed.

Primary schools in England will reopen to some pupils from June 1, the government said. Secondary school pupils will return later. Britain has the highest number of coronavirus deaths in Europe.

French churches were holding their first Sunday masses in more than two months after the government bowed to a court ruling that they should be reopened — with proper precautions.

“My cell phone is crackling with messages!” Father Pierre Amar, a priest in Versailles, just outside Paris, told AFP.

In the US, Trump’s demand that state and local officials allow churches, mosques and synagogues to reopen “right now” was met with at least some resistance.

An AFP journalist surveying religious buildings in Washington found none of nearly a dozen was open. A sign outside the Foundry United Methodist Church on 16th Street read: “All are welcome — online only.”

In Britain, Prime Minister Boris Johnson was on Sunday forced to defend his top aide Dominic Cummings, accused of having breached the government’s own lockdown rules.

Cummings was seen visiting his parents in Durham, 250 miles (400 kilometres) from his London home in March, despite suffering from virus symptoms. The Observer and Sunday Mirror reported he had broken lockdown restrictions again in April.

“He has acted responsibly and legally and with integrity,” Johnson said of Cummings.

But Tory MP Craig Whittaker tweeted that “you cannot advise the nation one thing then do the opposite.”

In the US, Trump has dismissed experts’ advice and — with some 40 million jobs lost this year — he has pushed aggressively to reopen the economy.

Again trying to project confidence in the reopening, he played golf for a second straight day on Sunday, after avoiding the links since March 8.

“Cases, numbers and deaths are going down all over the Country!” he tweeted.

Many states have seen improvement, but others — including Arkansas, where a pool party led to a cluster of infections, and North Carolina — continue to witness surges.

And any notion of normality collided with the grim message that the country, harder-hit by the coronavirus than any other, is steadily approaching 100,000 dead.

In a striking editorial choice, The New York Times marked the somber toll on Sunday with a memorial on its front page carrying one-line obituaries for 1,000 victims.

“The 1,000 people here reflect just one percent of the toll. None were mere numbers,” the newspaper said.

New York state itself has registered dramatic improvement since early April, when it saw more than 1,000 deaths a day. Its latest toll was 109, said Governor Andrew Cuomo, as he briefed reporters not from a stuffy office but from popular Jones Beach on Long Island.

Cool weather held down crowds on New York beaches, but those who pulled out their sandals and made the trip expressed relief at being back in the open air.

“We have been homebound for 70 days — 10 weeks,” said Lisa Sklar, a men’s apparel stylist, as she strolled on Coney Island with her husband and daughter. “It is great for our mental health to be here.”