The coronavirus task force will watch the numbers and then sit down this week to decide whether to ease further the quarantine measures in Metro Manila. The Metro mayors are divided on loosening the restrictions.
By: Dexter Cabalza, Jeannette I. Andrade, Marlon Ramos, Tina G. Santos - @inquirerdotnet
Philippine Daily Inquirer / 04:53 AM May 25, 2020 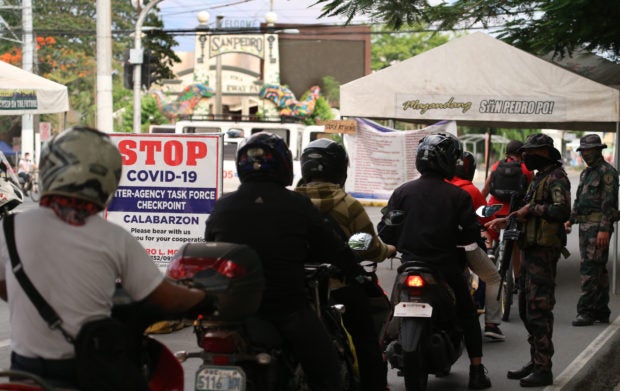 MANILA, Philippines — Quarantine restrictions in Metro Manila could be further loosened starting June 1 as the country pursues a phased return to economic activity after nearly three months of lockdown due to the new coronavirus pandemic.

Defense Secretary Delfin Lorenzana on Sunday said the Inter-Agency Task Force on Emerging Infectious Diseases would watch the coronavirus trend this week and then decide whether to downgrade the “modified enhanced community quarantine” in Metro Manila to “general community quarantine.”

The downgrade means only villages in the metropolis with high numbers of confirmed coronavirus cases would be locked down, with local officials making the decision. The rest of the National Capital Region would be free to begin a gradual return to normality, but under strict orders to follow public health measures.

In a text message, Lorenzana cited some indicators that the task force would watch before making a decision for a downgrade: confirmed cases not increasing, deaths occurring in single digits, and recoveries increasing.

On Sunday, the Department of Health (DOH) reported 258 new infections, the largest single-day increase in one week, which raised the national total to 14,035. Of the new cases, 195, or 75 percent, were recorded in Metro Manila, epicenter of the local coronavirus outbreak.

The DOH reported five new deaths, raising the death toll to 868 and continuing a week of single-digit deaths that was broken only on Friday, when 11 patients were reported to have died.

Recoveries continued to outstrip deaths, with 72 more patients getting well, bringing the total number of survivors to 3,249.

Besides Metro Manila, the provinces of Bataan, Bulacan, Nueva Ecija, Pampanga, Zambales and Laguna remain sealed off because of their high risk for infection.

On Saturday, during a military event at Camp Aguinaldo in Quezon City, Lorenzana told reporters that the purpose of the gradual easing of restrictions was to get the public accustomed to measures necessary to prevent a second wave of infections, such as wearing protective masks, physical distancing and frequent hand-washing.

The Metro Manila Council will hold an “urgent meeting” on Wednesday to discuss whether the quarantine restrictions, loosened on May 16 to allow partial business reopenings, should be eased further, according to the metropolitan policy-making body’s chief, Parañaque City Mayor Edwin Olivarez.

Olivarez said on Sunday that most of the 17 mayors in the metropolis were “torn between the economic side and health issue” of the quarantine.

He said some of the mayors wanted the quarantine to be extended anew for fear of a resurgence of the virus if the restrictions were eased some more.

On Saturday, 10 of the 18 villages in Navotas City were locked down again until May 31 due to the increasing number of infections, which stood at 160 as of Friday.

Olivarez said he wanted the restrictions to be loosened some more to allow economic recovery in the metropolis.

But Senate Minority Leader Franklin Drilon said Metro Manilans might have to stay home longer because the government did not have accurate information to support a decision to loosen the quarantine restrictions.

Drilon blamed the situation on the lack of mass testing by the DOH.

He said the absence of reliable data from the DOH would also affect lawmakers’ decision whether to renew Republic Act No. 11469, the law passed by a joint session of Congress in March to enable President Duterte to respond to the coronavirus pandemic.

“Until we’re able to secure accurate data [on coronavirus cases], the [lockdown order] will be extended again and again,” Drilon said in a radio interview on Sunday.

“And why is there no accurate data? It’s because there’s no sufficient testing. We don’t know [the actual number of infected people],” he said.

The senator noted that the DOH had reported that 20,264 people had tested positive for the new coronavirus that causes the severe respiratory disease COVID-19, but only about 14,000 had been confirmed to have been infected.

The DOH blamed the gap on the shortage of staff validating the test results, which became pronounced after the agency expanded its testing capacity with the acquisition of thousands of testing kits and the accreditation of more testing laboratories.

Drilon said the disparity meant more than 6,000 people could be out in the streets unknowingly spreading the virus.