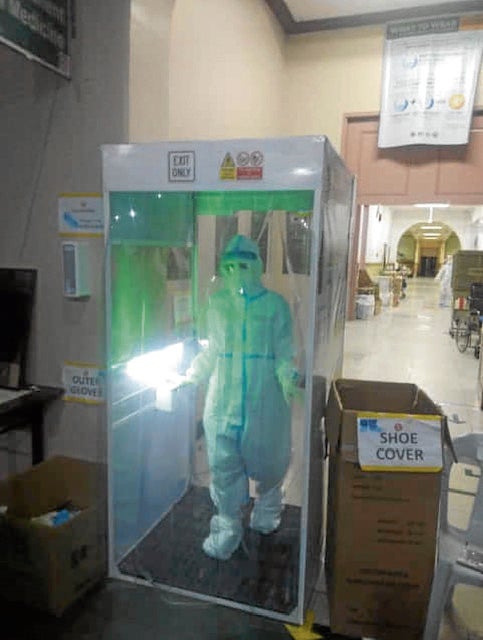 MANILA, Philippines — Concern over the safety of loved ones who may be exposed to COVID-19 have inspired a family of doctors and entrepreneurs to design and produce a modified disinfection unit (MDU) that sprays health workers with alcohol just before they take off their personal protective equipment (PPE).

The strong blast of 70 percent ethanol or isopropyl alcohol is intended to eliminate harmful fomites or infection-causing materials that may have attached themselves to the PPE while a health worker is on duty.

“Even before the lockdown was announced … we were very concerned about protecting our loved ones from this deadly virus since most of them will be … front-liners,” said Mike Tripon, owner and director of Favori who comes from a family of “doctors and dentists.”

“We [also] consulted with … doctor-friends [and doctors] and dentists in the family about how we could help them with our existing technology,” Tripon said in an email.

From sister-in-law Dr. Edhel Tripon, they learned that doffing—that is, a medical worker’s removing his or her PPE—is an excruciating 31-step sequence that puts doctors and other health workers at risk the most.

Usually done at the end of one’s tiring 8-to-12-hour shift, doffing is such a critical procedure that missing one step could be fatal to the worker or to those he or she would come into contact with later.

Consequences could include inhaling the virus, getting it on one’s skin or passing the virus to one’s fellows in the doffing room, the family learned.

As the quarantine wore on, Mike Tripon said discussions at mealtimes included stories of “senior doctors active on COVID floors” who were worried about having only “makeshift” doffing areas.

“These areas are not adequately equipped and sometimes there is even lack of safety officers,” he said.

Family members put their heads together and eventually designed a .27 x .27-square-meter area that is 1.8 meters tall “with sticky overlapped PVC [polyvinyl chloride] curtains to help contain the alcohol (blast) and an external box that contains a nano particle generator.”

PVC is a certain kind of durable plastic normally available in hardware stores.

Tripon’s sister, Mariel Manguiat, a computer science automation programmer, “did the code or automation software.” His brother, Gabby, and another sister, Joanna, both professional graphic designers, “made the booth look good with easy-to-read instructions.”

“We had to work with what we had on hand. At one point, we were even asking donations for broken [equipment] to get the usable parts. Broken desktop and laptop computers have lots of recyclable parts,” Tripon said.

At one point, he and friends Julian Teodoro, a pioneer in unmanned aerial vehicle (UAV) development, and Romson Velez, another UAV enthusiast, “took apart some drones for parts needed for building the MDUs.” Parts were also taken from Favori’s own machines.

“We decided a disinfection chamber was needed to deload PPEs before starting the doffing sequence. We had an in-house team stuck during the lockdown that helped work on this. Getting the parts together was difficult, [but later we found that] there were more kindhearted, generous people who believed in our project and opened their warehouses to us,” Tripon recalled.

He explained that the MDU’s generator “turns liquid alcohol into [a] nano particle-sized dry alcohol mist that doesn’t leave a wet mess like other misting systems.”

“When a health worker in full PPE steps in, the misting is activated … [it] sprays for 20 seconds and stops when the person exits. It automatically disinfects the unit before the next person enters. It is an alcohol bath chamber,” he said.

Tripon said this technology would spare a hospital from wet floors “which can be an added danger to older patients.”

On average, the MDU uses only 1,000 milliliters of commercial-grade alcohol in a day. This means consumption is “kept minimal, compared to other systems that require drums of liquid disinfectants that have to be refilled more than once a day. This is one of the main advantages of the MDU over other systems: It is very economical to use,” Tripon said.

“Alcohol as a disinfectant is cheap and readily available. It is already certified [by the Food and Drug Administration] as long as you are buying the branded ones and there is no more need for mixing or diluting so there is less risk of measurement mistakes,” he said.

Being in the scenting business, Tripon is familiar with spraying a huge space like a 2,000-square-meter showroom for social events.

“Imagine the MDU [as a 90 x 90 x 195-centimeter] box with a [spraying] machine that can scent a 4,000 to 5,000-square-meter area. You can be sure it covers the surface area of the human body. We went over specifications for the MDU to make sure the human body will be hit with nanoparticles of alcohol. A nanoparticle is a billionth of a meter, smaller than the virus. [We use] an invisible bullet to disable an invisible enemy,” he said.

Tripon said doctors from the Wuhan region who visited the Philippines in April took notice of an MDU they saw at Philippine General Hospital (PGH).

“We were told the visiting doctors from Wuhan were impressed with the innovation, and that it was something they did not think of doing,” he later told the Inquirer in an e-mail.

Tripon emphasized that the MDU, despite its intense spraying power, would not put a person in danger.

“Exposure of 20 to 25 seconds in the chamber poses no real harm or danger,” he said in a text message. “But viruses and other microbes start disintegrating as early as 15 seconds. Alcohol deactivates the virus by destroying its lipid coating, then spills its guts all over the place, rendering them useless.”

He said that several units have been deployed: three MDUs to PGH, one to Tarlac Provincial Hospital, one to Philippine Marines Headquarters and one to Bel-Air Dental Clinic in Makati City.

Seven more MDUs are being built for other hospitals soon.

Jo-an, whom Tripon said “runs Favori Ventures Inc.” and Aquino are currently leading a fund-raising drive so that more MDUs will be distributed to other hospitals. Details are available at favori.ph.