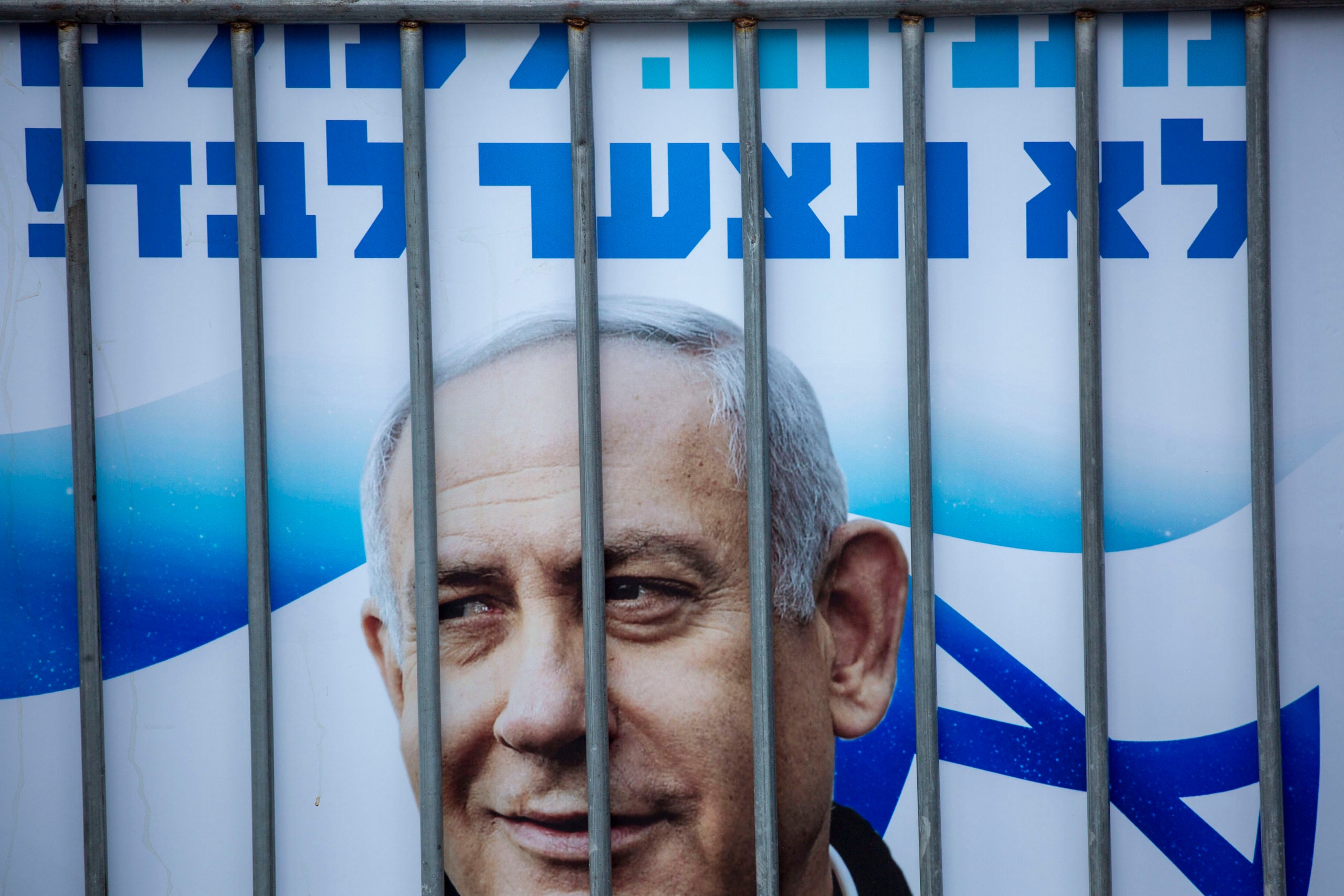 A banner of Israel’s Prime Minister Benjamin Netanyahu is behind a barrier during a protest by supporters of Netanyahu outside his residence in Jerusalem, Sunday, May 24, 2020. Israeli Prime Minister Benjamin Netanyahu was heading to court to face corruption charges in the first criminal trial ever against a sitting Israeli leader. The Hebrew writing says: ” Netanyahu. you will never walk alone”. (AP Photo/Ariel Schalit)

JERUSALEM  — Israeli Prime Minister Benjamin Netanyahu was heading to court Sunday to face corruption charges in the first criminal trial ever against a sitting Israeli leader.

Netanyahu is set to appear at the opening hearing at a Jerusalem district court, after his request to have his lawyers represent him instead was rejected. The courthouse was drawing crowds of supporters, protesters, and media hoping to witness Netanyahu enter the building, where he will hear the arraignment against him.

Netanyahu held his first Cabinet meeting with the new government just hours before heading to court. Neither he nor any of his ministers addressed the looming trial but the country’s outgoing religious affairs minister wished Netanyahu that “God will bring the truth out” at his trial.

Netanyahu faces charges of fraud, breach of trust, and accepting bribes in a series of corruption cases stemming from ties to wealthy friends. He is accused of accepting lavish gifts and offering to grant favors to powerful media moguls in exchange for favorable coverage of him and his family. He denies the charges and has lashed out at the media, police, prosecution, and courts of forging a conspiracy to oust him. It comes after years of scandals swirling around the family.

Netanyahu and his allies have spent months lashing out the country’s law enforcement system, and the charges against him have deeply divided the nation.

Ahead of the trial, two sets of protests and counter-protests gathered outside the courthouse and the prime minister’s official residence in Jerusalem. Netanyahu supporters outside the District Court in east Jerusalem wore masks with the prime minister’s face and held posters lambasting the attorney general who indicted him. Anti-Netanyahu demonstrators outside his residence blew trumpets and held a banner calling the longtime leader  “crime minister.”

Several of Netanyahu’s Likud party ministers, including the newly appointed internal security minister who oversees the police, said they would arrive to back him.

Opposition leader Yair Lapid accused them of fomenting violence and trying to intimidate the judges. “Netanyahu is trying to drag us into a civil war to save himself from trial,” he told the YNet website.

Netanyahu’s court appearance Sunday caps a three-year investigation. It also comes after more than a year of political turmoil, with three inconclusive elections — each seen as a referendum on Netanyahu — finally ending last month when the Israeli leader and his main rival, former army chief Benny Gantz, came to a power-sharing deal.

Netanyahu’s proceedings were supposed to begin in March but were delayed by his justice minister who issued restrictions on the courts amid the coronavirus crisis.