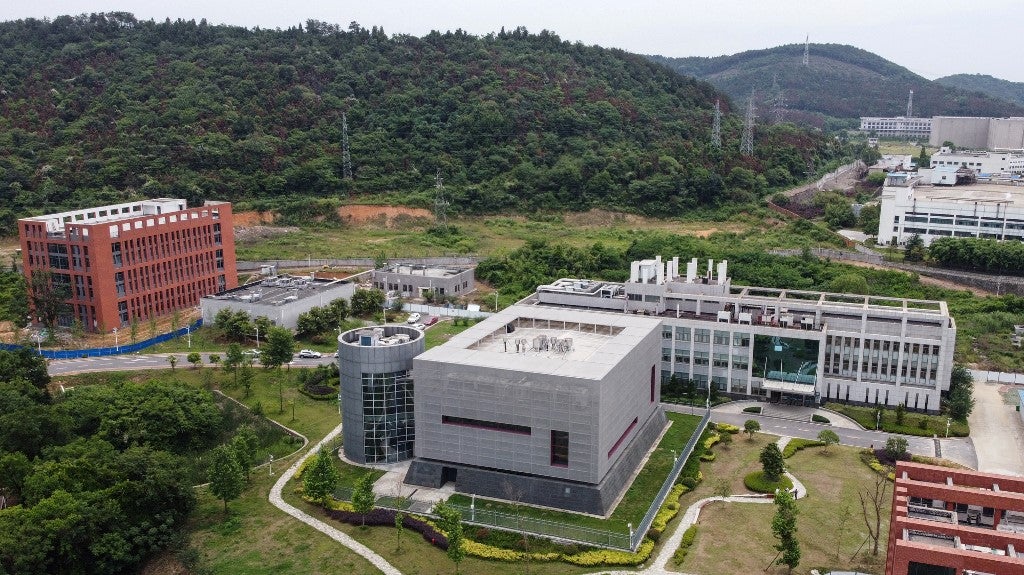 This aerial view shows the P4 laboratory (C) on the campus of the Wuhan Institute of Virology in Wuhan in China’s central Hubei province on May 13, 2020. – Opened in 2018, the P4 lab, which is part of the greater Wuhan Institute of Virology and conducts research on the world’s most dangerous diseases, has been accused by top US officials of being the source of the COVID-19 coronavirus pandemic. (Photo by Hector RETAMAL / AFP)

BEIJING, China — The Chinese virology institute in the city where COVID-19 first emerged has three live strains of bat coronavirus on-site, but none match the new contagion wreaking chaos across the world, its director has said.

Scientists think COVID-19 — which first emerged in Wuhan and has killed some 340,000 people worldwide — originated in bats and could have been transmitted to people via another mammal.

But the director of the Wuhan Institute of Virology told state broadcaster CGTN that claims made by US President Donald Trump and others the virus could have leaked from the facility were “pure fabrication”.

In the interview filmed on May 13 but broadcast Saturday night, Wang Yanyi said the centre has “isolated and obtained some coronaviruses from bats.”

“Now we have three strains of live viruses… But their highest similarity to SARS-CoV-2 only reaches 79.8 percent,” she said, referring to the coronavirus strain that causes COVID-19.

One of their research teams, led by Professor Shi Zhengli, has been researching bat coronaviruses since 2004 and focused on the “source tracing of SARS”, the strain behind another virus outbreak nearly two decades ago.

“We know that the whole genome of SARS-CoV-2 is only 80 percent similar to that of SARS. It’s an obvious difference,” she said.

“So, in Professor Shi’s past research, they didn’t pay attention to such viruses which are less similar to the SARS virus.”

Conspiracy rumours that the biosafety lab was involved in the outbreak swirled online for months before Trump and US Secretary of State Mike Pompeo brought the theory into the mainstream by claiming that there is evidence the pathogen came from the institute.

The lab has said it received samples of the then-unknown virus on December 30, determined the viral genome sequence on January 2 and submitted information on the pathogen to the WHO on January 11.

Wang said in the interview that before it received samples in December, their team had never “encountered, researched or kept the virus.”

“In fact, like everyone else, we didn’t even know the virus existed,” she said. “How could it have leaked from our lab when we never had it?”

The World Health Organization said Washington had offered no evidence to support the “speculative” claims.

In an interview with Scientific American, Shi said the SARS-CoV-2 genome sequence did not match any of the bat coronaviruses her laboratory had previously collected and studied.