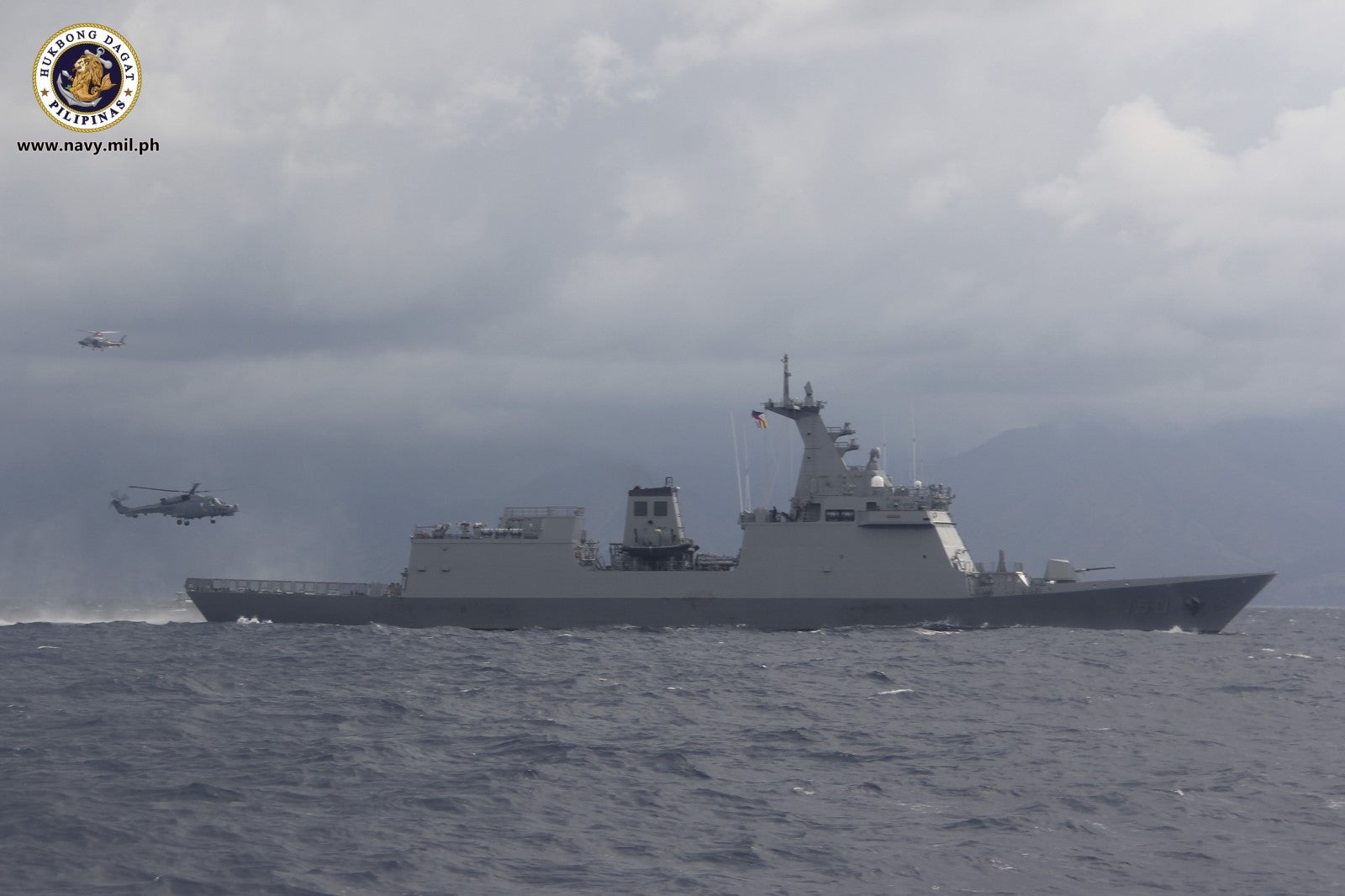 The future BRP Jose Rizal was escorted by the BRP Andres Bonifacio (PS-17), together with one Agusta Westland (AW) 109 helicopter and C-90 fixed wing aircraft toward the anchorage area on Friday afternoon (May 22), the Navy said in a statement.

Before the ship’s tentative commissioning set on June 19, the birthday of Jose Rizal whom the ship was named after, the crew will first go on quarantine prior to final acceptance evaluation by the Technical Inspection and Acceptance Committee (TIAC), the Navy said.

The Philippine government had signed a deal with HHI in October 2016 for two multi-role frigates worth P16 billion.

The selection of combat management systems (CMS) for the frigates had put the deal in national spotlight in 2018. The Navy was then pushing for Tacticos of Thales Nederland, a CMS already compatible with Link 16, compared to the CMS picked by the HHI, which was Naval Shield ICMS of Hanwha Systems.

The contract stated that the shipbuilder would have the “sole right” to choose the subsystems, which was then opposed by the Navy but not by the Department of National Defense.

HHI promised in 2017 that Hanwha Systems’ Naval Shield ICMS would be compatible with Link 16 by 2019 or before the first frigate was delivered.

But a security official familiar with the project said that the standard conformity tests by the US JITC for the Naval Shield ICMS and Link 16 may be moved to 2021.

Documents seen by INQUIRER.net showed that HHI pushed for the delivery of the frigate even without the pre-delivery inspection by the TIAC in South Korea due to travel restrictions brought by the COVID-19 pandemic.

HHI president and CEO Yeong Seuk Han wrote to Philippine Defense Secretary Delfin Lorenzana on April 14 to suggest that the final acceptance evaluation be done in the Philippines after delivery of the vessel “by way of relevant amendment of contract.”

“As most of the assessments are already completed, I believe there is no problem with final acceptance evaluation in the Philippines,” Yeong’s letter read.

But HHI could not yet produce the US Joint Interoperability Test Command (JITC) certification required by the TIAC to validate these tests.

Yeong said in his letter that HHI and Hanwha Systems representatives had visited Ultra Electronics in the US and “verified the certificate with their naked eyes.”

“However, as it is a classified document that requires the prior approval of US government for provision to third parties, it has been confirmed that it is a force majeure that the certificate cannot be submitted at this time,” Yeong wrote.

“Therefore, we have no choice but to submit the confirmation letter by the ROK Minister of National Defense as well as relevant document by DAPA (Defense Acquisition Program Administration) in lieu of the certificate of the ADSI test equipment,” he added.

“It has been verified with the US manufacturer of the ADSI, Ultra Electronics Limited, that the ADSI has received the Link 16 compatibility certification of the US JITC,” said Jeong.

He said that the ROK Defense Communication Command and the Agency for Defense Development have also adopted the ADSI from the same US manufacturer, Ultra Electronics, and are conducting Link 16 compatibility tests.

“With these facts as basis, I would like to request your active support so that the approval of for the compatibility of the Philippine frigate’s combat management system with Link 16 may be given soon and lead to the successful delivery of frigate number 1,” Jeong said.

Lorenzana responded to Yeong on April 20, approving the request of HHI to deliver the BRP Jose Rizal to the Philippines.

The defense chief said the letter of guarantee from HHI and confirmation by the ROK Ministry of National Defense were sufficient for the Philippine DND to accept HHI recommendation to conduct final acceptance tests for the frigate in the Philippines.

Lorenzana listed a few conditions, however.
* The final acceptance evaluation of the vessel shall be subjected to technical inspection and acceptance standards and procedures provided in the contract;
* The HHI shall warrant the vessel and still be accountable until such time that the final acceptance evaluation has been concluded and the vessel has been accepted by TIAC. In addition, HHI will submit certification of the frigate CMS being compatible with Link 16 once this was available.

The Link 16 compatibility, set in the contract requirements for the frigates deal, would have been the first for the Philippine Navy.

If future Navy ships would be eventually installed with Link 16 equipment later on, sailors would have enhanced monitoring of battle space operations, share information in real time and level up interoperability with allies and other local platforms fitted with this capability.

Everything that a ship at sea could detect or all information that it would gather, could also be seen by other local platforms and allies connected to the network. There would be real-time data swapping without getting hacked or being intercepted by the Chinese or other hostile force, explained one Navy official familiar with the frigate project.