CAGAYAN DE ORO CITY—After three years of moving around bombed-out Marawi City to find a new source of income and feed her seven children, Mila Pagarungan cannot just give up from sheer fatigue because of a new menace she faces—the coronavirus pandemic.

Pagarungan knows the precautions—the need to wear masks, wash hands frequently and maintain a safe distance from others. But complying with the well-known protocols are not easy in the city that used to have more than 200,000 people.

“How can we wash our hands when the water supply is very limited?” she asked, noting that water sources used to be accessible in the city even if one had to endure long lines and the distribution system bogged down from time to time. “[But] the water trucks that used to augment our water supply have stopped their rations.”

More troubling, she said, is the lack of physical distancing in their cramped shelter, heightening fears of the new coronavirus disease (COVID-19) that has infected more than 13,500 all over the country. 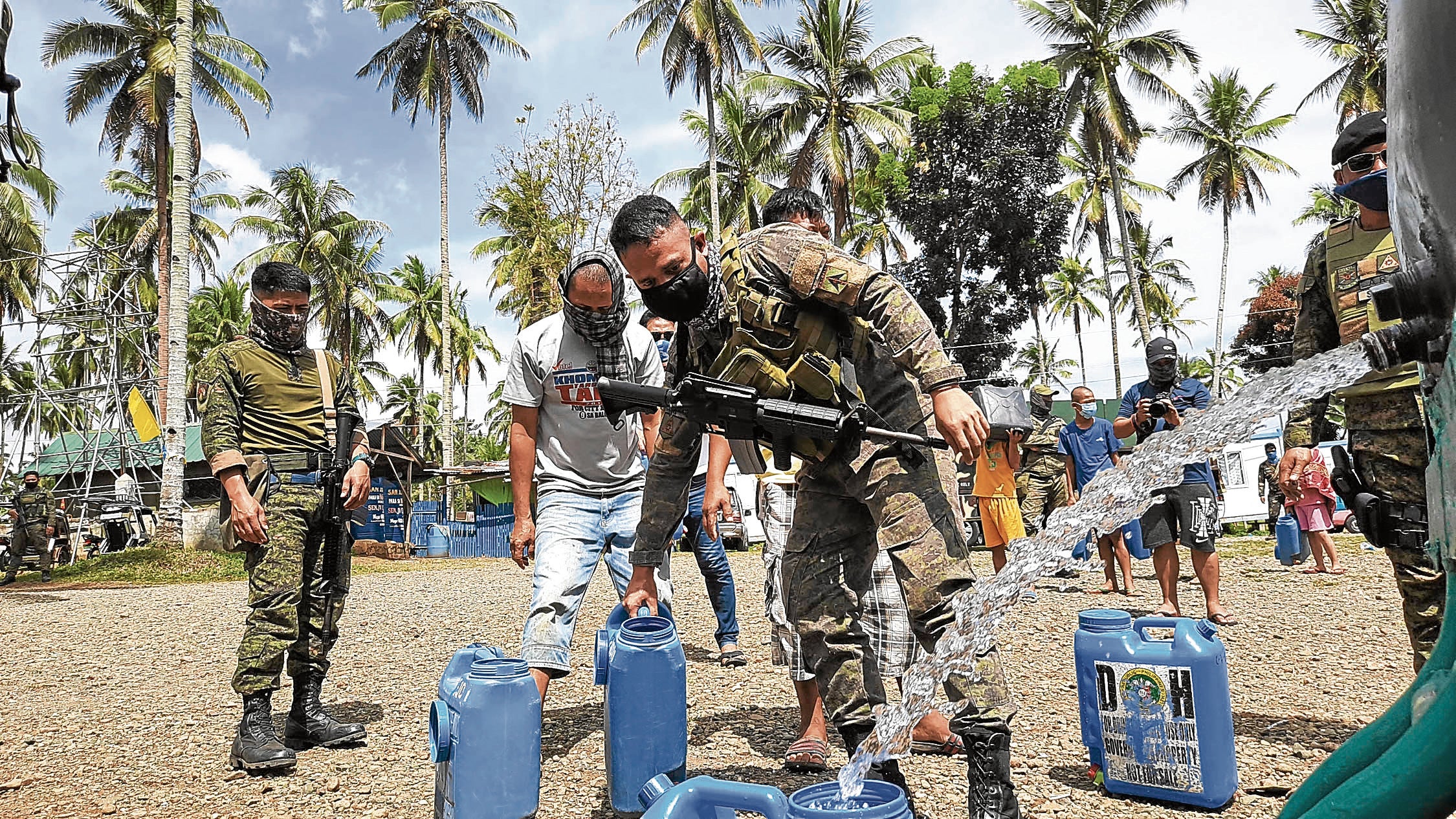 WATER RELIEF Soldiers from the 4th Mechanized Infantry Battalion of the Armed Forces of the Philippines provide potable water for the 131 displaced persons from Marawi City now residing at the Bakwit Village in Matungao, Lanao del Norte province, in this photo taken on April 26. —RICHEL V. UMEL

Pagarungan was one of thousands of Maranaos who fled their homes after Islamic State terrorists laid siege on Marawi on May 23, 2017. They remain homeless to this day.

More than 80,000 others have left the city and tried to rebuild their lives with relatives and host families in different parts of the country.

“It’s been three long years and until now, we haven’t been able to pick up the pieces of our war-torn lives. True, most of us who used to stay in tent cities have now been transferred to more sturdy shelters—but, it’s still not home,” the groups emphasized.

Their hardships were compounded by the coronavirus crisis because breadwinners had to stop working when the national health emergency was declared on March 16.

Even the financial support from relatives working in other parts of the country stopped because the relatives themselves no longer had money to send.

“COVID-19 has further exposed our vulnerabilities,” the civic groups said. “War brought us to our knees. Do not let COVID-19 break us completely.”

Drieza Lininding of Moro Consensus Group hoped the government would also bankroll their Balik Marawi plan, like the government’s own Balik Probinsya program which aims to encourage people to leave congested urban areas and return to their provinces.

Just like the slums of Metro Manila, the cramped temporary shelters of the Marawi evacuees are also vulnerable to the spread of COVID-19, Lininding said. 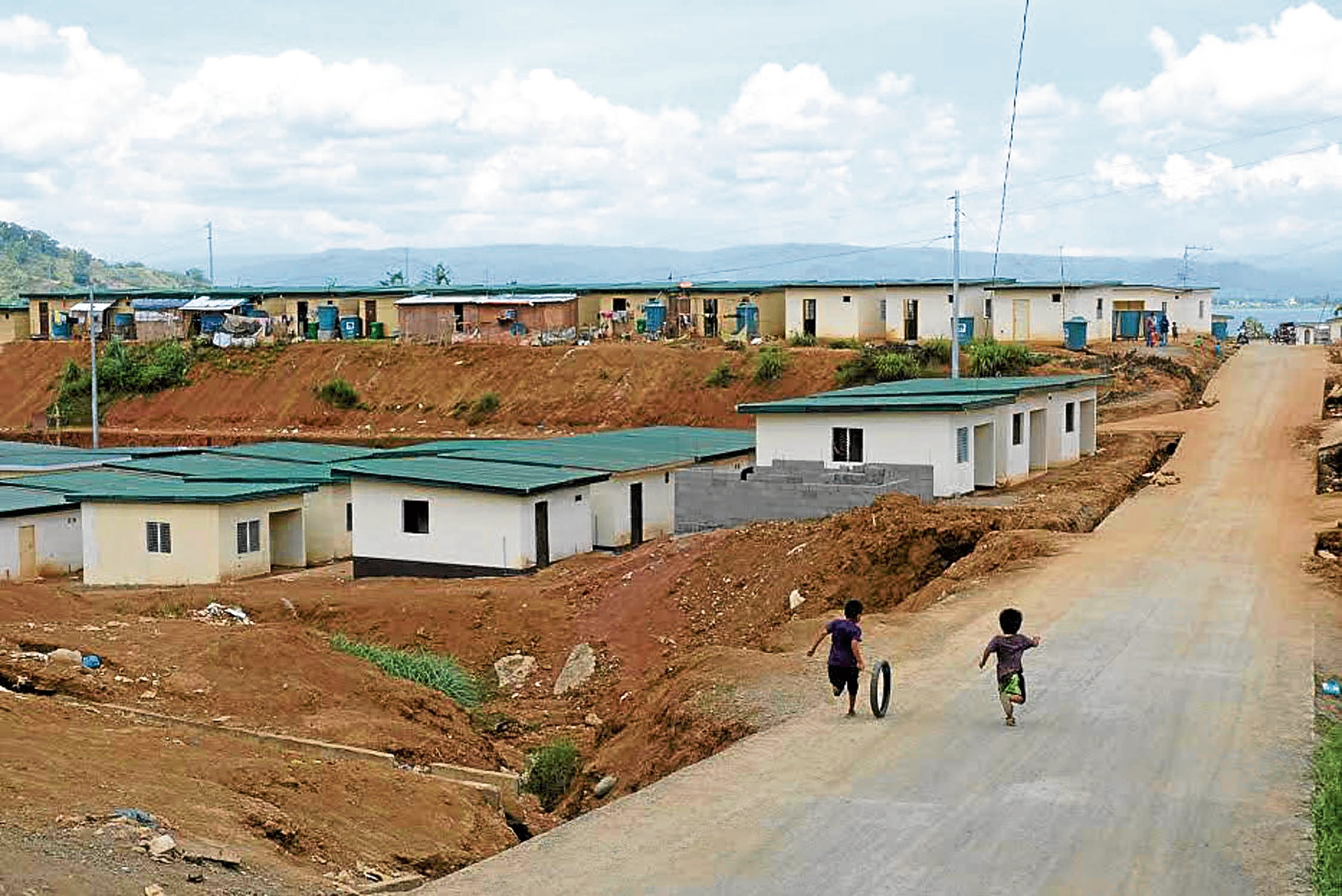 THREE YEARS LATER “Transitional shelters,” like this cluster in Barangay Boganga, Marawi City, have been built for residents displaced by the siege that began on May 23, 2017, and ended in October the same year. The evacuees are still not allowed to rebuild their homes in the war zone. —BONG S. SARMIENTO

“The budget for the rehab of the most affected area was approved by the President in April and May this year. Hence, full implementation of infrastructure projects is expected to commence by July,” he said.

“Despite the adverse effects of COVID-19 in all sectors, we are confident that our rehab target completion in December 2021 is manageable and attainable,” Del Rosario said.

The approved fund releases include P1.91 billion for various temporary and permanent houses of the National Housing Authority (NHA); P155.7 million for the Social Housing Finance Corp. (SHFC), also for permanent shelters and P558.2 million for the construction of public facilities.

Some P766.5 million was also allocated for the Local Water Utilities Administration to build a sewage treatment plant and potable water supply system.

The Department of Public Works and Highways will get P80.2 million for road repairs and reconstruction, while the Bangsamoro’s agriculture ministry was allocated P91.3 million to support livelihood initiatives.

“This serves as a huge boost for implementing agencies as they now have the funds needed to complete their respective projects aimed at rebuilding Marawi,” Del Rosario said.

Before the national health emergency, some families were allowed to enter the most affected area of the city to start rebuilding their houses.

As of February, 3,072 families applied for building permits but only 482 were approved out of the 1,475 that complied with the requirements, according to the city’s Office of the Building Official.

But many of them are still awaiting funds from the NHA or SFHC while other building permits were deferred pending the settlement of land disputes or titling issues.

Aside from the demanding task of building homes, families will still have to contend with the absence of electricity and water supply.

“We are faced with the difficulty of coming to terms with the reality of returning to a devastated city. [But] for all its flaws, Marawi, or the Dansalan of old, is an irreplaceable heritage bequeathed to us by our forebears,” Lininding said. —WITH A REPORT FROM JULIE M. AURELIO