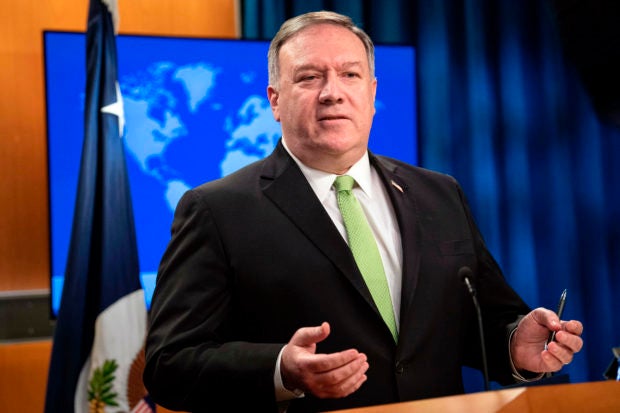 Secretary of State Mike Pompeo speaks during a press briefing at the State Department on Wednesday, May 20, 2020, in Washington. (Nicholas Kamm/Pool Photo via AP)

WASHINGTON — Secretary of State Mike Pompeo on Friday condemned China’s effort to take over national security legislation in Hong Kong, calling it “a death knell for the high degree of autonomy” that Beijing had promised the territory.

The measure, submitted Friday on the opening day of China’s national legislative session, is strongly opposed by pro-democracy lawmakers in semi-autonomous Hong Kong.

Pompeo weighed in as well, calling the proposal by China an effort to “unilaterally and arbitrarily impose national security legislation on Hong Kong.”

“Hong Kong has flourished as a bastion of liberty. The United States strongly urges Beijing to reconsider its disastrous proposal, abide by its international obligations, and respect Hong Kong’s high degree of autonomy, democratic institutions, and civil liberties, which are key to preserving its special status under U.S. law,” Pompeo said in a statement.

He said the decision to ignore the will of the people of Hong Kong would be a “death knell for the high degree of autonomy Beijing promised for Hong Kong” under a decades-old agreement known as the Sino-British Joint Declaration.

The proposed bill is aimed at forbidding secessionist and subversive activity, as well as foreign interference and terrorism. It comes after months of pro-democracy demonstrations last year that at times descended into violence between police and protesters.