UP-PGH safety officer, sons forced out of home by neighbors 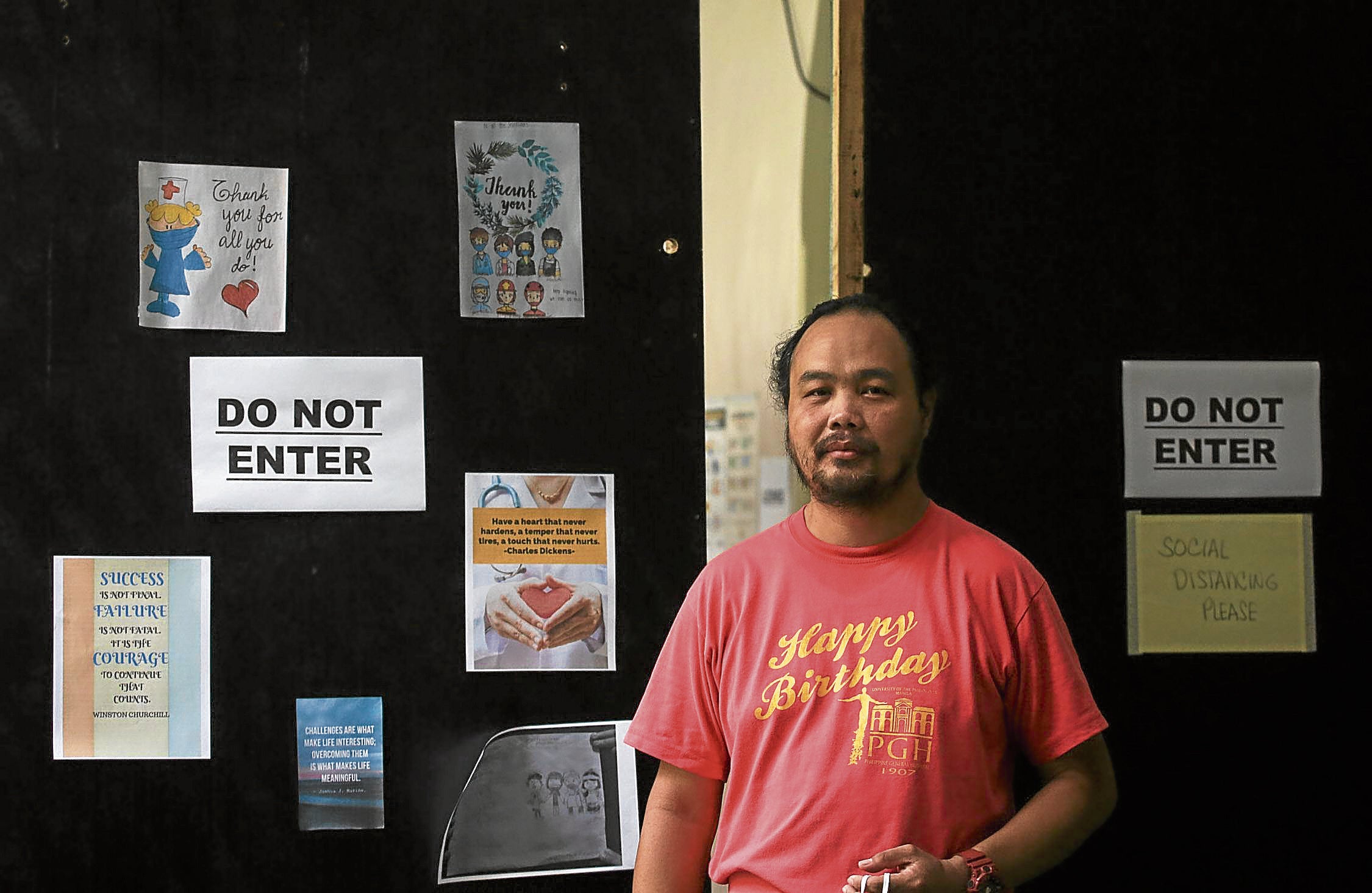 ONE OF MANY Joel Santiago is not the only UP-PGH personnel who has been harassed because of their work. Several health workers told the Inquirer that they also experienced discrimination. —PHOTO BY LYN RILLON

Whenever 42-year-old Joel Santiago talks about his job for the past 22 years at the University of the Philippines-Philippine General Hospital (UP-PGH), he does so with an overwhelming sense of pride.

As a safety and disaster officer for the state-run hospital, he starts working as early as 7 a.m., checking each facility and ensuring that proper protocols are being followed in attending to patients and visitors.

But even as he keeps things organized in the usually crowded public hospital, his home life has been disrupted by angry neighbors who viewed him as a threat after UP-PGH was declared a facility dedicated to new coronavirus disease (COVID-19) patients.

Santiago and his family of three boys aged 12, 8 and 6 used to stay in an apartment at Pook Palaris, Barangay UP Campus in Quezon City. The two older boys studied at the nearby UP Integrated School.

Despite his young age, even Santiago’s eldest son was not spared from being harassed by their neighbors, who were close to the landlord.

“’Get out; we will cut off your water and electrical connections,’ they would repeatedly tell me and my eldest son whenever I was not home,” Santiago said.

The worst harassment came from another neighbor who even relayed through his son a death threat meant for him, at a time when he could not leave the hospital for around two weeks during the lockdown.

“My son was so scared when he told me about the verbal harassment he had been receiving,” said Santiago, who reported the incident to the UP Diliman police.

“They were notorious in the neighborhood for being bullies and we knew that these were not just empty threats,” he told the Inquirer, adding he was also worried about the psychological effects on his children.

But the police did not file any report about the incident and only advised him to come back if the harassment continued.

Santiago said he also suspected that his neighbors were just using his work at a COVID-19 ward as an excuse to kick him out because they had long wanted the apartment for themselves.No water, electricity

His worst fears were realized when he came home sometime in March and found that their electric and water lines had been cut.

That same day, he was doing the laundry when his neighbors came over and again told him to leave.“I resisted. One of them punched me but I was able to dodge it and the blow landed on my chin,” Santiago recalled.

He sought help from barangay officials but they failed to resolve the situation. Returning home, he found that someone had gone into their house, stuffed their belongings into garbage bags and dumped the bags outside.

No options left“I said to myself, this is it. There was nothing I could do,” said Santiago. He took what little he could and left the house with his children.

The family sought refuge that night at the All-UP Workers Union office on the campus.

Since then, his children have been staying with his sister in Cavite province.

“Although we can communicate through video calls, the situation is really hard for them,” he said. “The reason why I continue to work here in Manila is I want them to finish their studies here, but that’s uncertain now.”

Santiago now stays in a dormitory at UP-PGH. At times, he would work beyond the mandatory eight hours, ending his duty by as late as 11 p.m. just so he could forget his problems. He has given up on the police taking action on his case, saying they would probably just advise him again to take the matter up with barangay officials.

He is more concerned at the moment about looking for a new house for his family before classes resume in August.

“That’s my biggest problem now. I want my kids to be able to continue their studies here in Manila, but I need to look for a decent place first for us to start over,” Santiago said. But his meager salary would mean limited options, he added.

The United Nations has spoken out against the discrimination of health workers, which exacts a hefty price not only on them, but also on society. In support of this, local governments in Metro Manila passed their own antidiscriminatory ordinances for health workers in April.

Violators will be penalized under Sec. 9 (a) of the Mandatory Reporting of Notifiable Diseases and Health, Events of Public Health Concern Act, Data Privacy Act, Cybercrime Prevention Act and the Revised Penal Code.