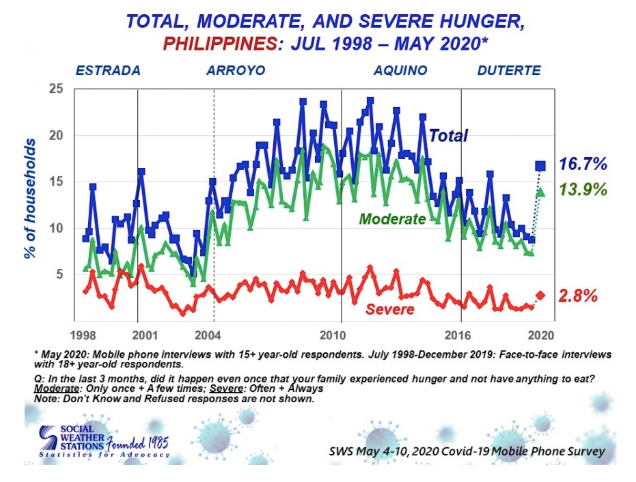 MANILA, Philippines – The number of Filipinos who were hungry because of lack of available food nearly doubled while most areas were under the COVID-19 lockdowns, a survey from Social Weather Stations (SWS) noted.

SWS on Thursday said that 16.7 percent of the respondents or 3.9 million families — surveyed virtually from May 4 to 10 — experienced involuntary hunger in the past three months. This is a huge spike compared to the 8.8 percent involuntary hunger rates recorded last December 2019.

This is also the highest hunger rate registered under President Rodrigo Duterte’s term, and highest since a 22.0 percent in September 2014.

According to the survey results, the hunger rate rose in all localities, but the sharpest increase was recorded in Metro Manila — the epicenter of the COVID-19 pandemic.

For the past three months, hunger rates in Metro Manila were at an alarming 20.8 percent, from just 9.3 percent in December 2019. This means that one of five Metro Manila residents or an estimated 693,000 families experienced involuntary hunger from February to April.

Moderate hunger in Metro Manila, explained by SWS as hunger only once or a few times in the last three months, rose from 7.3 percent to 19.4 percent. Ironically though, severe hunger or those who experienced hunger often or always during the said period fell, from 2.0 percent to 1.4 percent.

The recent survey also provided a follow-up question for the respondents, asking them whether their families have received any form of assistance like food packs since the COVID-19 pandemic started.

According to SWS, 99 percent said that their family received some food to cope with the crisis, opening questions whether government aid is not sufficient — especially since 99 percent of the respondents also noted that they received food packs from government.

“Government was the most common source of food-help at 99%, followed by relatives at 22%, private groups or institutions like churches and non-government organizations (NGOs) at 16%, friends at 10%, and private individuals at 8%,” SWS said.

The survey also showed that the poor are more vulnerable to lockdown measures, as hunger was higher among people with fewer years of formal education: 21.1 percent among non-elementary graduates, 24.4 percent in elementary graduates.

In comparison, only 16.5 percent of high school graduates and 6.9 percent of college graduates experienced hunger in the last three months.

After Luzon and other areas were placed under an enhanced community quarantine, work — except for essential frontline services — was suspended in a bid to limit local coronavirus transmissions.

But the move has left people who rely on daily earnings and whose jobs cannot adjust to a work-from-home scheme without any income through the lockdown.

The government has implemented programs to aid families affected by the quarantine measures, like the social amelioration program which was supposed to grant 18 million families aid ranging from P5,000 to P8,000.  However, several households have complained that they have yet to receive cash aid from the government.

SWS explained that they conducted the survey through mobile phones and computer-assisted telephone interviewing of 4,010 working-age Filipinos, as the lockdown measures made it difficult to conduct face-to-face interviews.

There were 294 respondents from the National Capital Region, 1,645 from Balance Luzon (or Luzon outside of Metro Manila), 792 from the Visayas, and 1,279 from Mindanao.

SWS says they are maintaining sampling error margins of ±2% for national percentages, ±6% for Metro Manila, ±2 for Balance Luzon, ±3% Visayas, and ±3% in Mindanao.