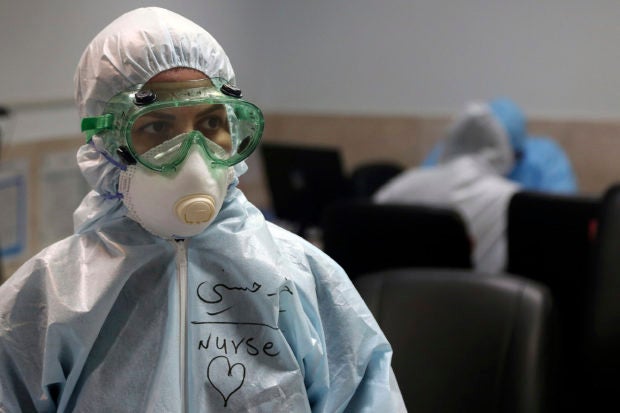 In this March 8, 2020 file photo, a nurse wears protective gear in a ward dedicated for people infected with the new coronavirus, at a hospital in Tehran, Iran. While crippling sanctions imposed by the U.S. government left the country ill-equipped to deal with the fast-moving virus, some medical professionals say government and religious leaders bear the brunt of the blame for allowing the virus to spread — and for hiding how much it had spread. (AP Photo/Mohammad Ghadamali, File)

In southern Yemen, the virus-related death toll at a medical center run by an international aid group attests to “a wider catastrophe” in the war-torn country, Doctors Without Borders said.

The Iranian report carried by semiofficial news agencies, including ISNA, cited Deputy Health Minister Qassem Janbabaei, who did not elaborate. However, reports earlier in the week put the number of infected health care workers at only 800. Iran says more than 100 of those workers have died.

Iran on Thursday put the total number of dead from the virus at 7,249, or 66 more than Wednesday.

Health Ministry spokesman Kianoush Jahanpour said there were more than 129,000 confirmed cases of the virus, including 2,392 more than Wednesday.

Iran has the most virus-related casualties in the region.

For most people, the coronavirus causes mild or moderate symptoms, such as fever and cough that clear up in two to three weeks. For some, especially older adults and people with existing health problems, it can cause more severe illness, including pneumonia and death. The vast majority of people recover.

The Doctors Without Borders facility in the southern Yemeni city of Aden admitted 173 patients between April 30 and May 17, at least 68 of whom have died, the group said in a statement. The U.N.-recognized government based in the south has confirmed 180 cases nationwide, with 29 fatalities.

“What we are seeing in our treatment center is just the tip of the iceberg in terms of the number of people infected and dying in the city,” said Caroline Seguin, the group’s operations manager for Yemen.

“People are coming to us too late to save, and we know that many more people are not coming at all: they are just dying at home.”

The government tally of cases does not include confirmed cases in the country’s north, which is under the control of Houthi rebels who are believed to be concealing the magnitude of the outbreak by suppressing numbers and intimidating journalists and doctors who might leak any information. So far, they have reported four cases, including one death of a Somali migrant.

On Tuesday, a 35-year-old World Food Program staffer died of COVID-19, the illness caused by the virus, in the Houthi-controlled province of Saada, the group said.

In 2014, Houthi rebels took control of Yemen’s north and captured the capital Sanaa, forcing the U.N.-recognized government there to flee to Aden. Since 2015, a Saudi-led coalition of mostly Arab countries has been battling the Houthis to reinstate the government of President Abdel Rabbo Mansour Hadi.

The increase in suspected coronavirus cases in Yemen is sounding alarms throughout the global health community, which fears the virus will spread like wildfire through some of the world’s most vulnerable populations.

The World Health Organization said its models suggest that, under some scenarios, half of Yemen’s population of 30 million could be infected with the virus and more than 40,000 could die.

Half of Yemen’s health facilities are dysfunctional and 18% of the country’s 333 districts have no doctors. Water and sanitation systems have collapsed. Many families can barely afford one meal a day.

“The high level of mortality we are seeing amongst our patients is equivalent to those of intensive care units in Europe, but the people we see dying are much younger than in France or Italy: mostly men between 40 and 60 years old,” said Seguin of Doctors Without Borders, also known by its French acronym MSF.

The war in Yemen has killed more than 100,000 people, according to the Armed Conflict Location & Event Data Project, which tracks violence reports in Yemen. The war has also created the world’s worst humanitarian crisis, leaving millions suffering from food and medical shortages.