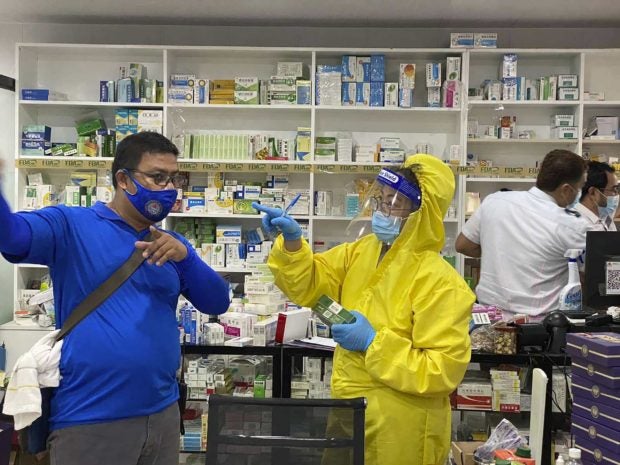 DRUGSTORE A police team discovers a drugstore operating in the clandestine hospital set up in a residential villa at Fontana Leisure Parks in Clark Freeport. —CIDG REGIONAL FIELD UNITS 3 VIA AP

CITY OF SAN FERNANDO, Pampanga, Philippines — The state-owned Clark Development Corp. (CDC) on Wednesday ordered the closure and full lockdown of an illegal hospital treating Chinese nationals infected with the new coronavirus disease (COVID-19) inside an upscale village at Clark Freeport, north of this provincial capital of Pampanga.

The two orders, signed by CDC president Noel Manankil, were issued after a raid on a residential villa inside Fontana Leisure Parks by the Central Luzon police’s Criminal Investigation and Detection Group (CIDG), the Food and Drug Administration (FDA), and the CDC on Tuesday afternoon.

The facility and its personnel violated the Medicine Act of 1958, according to a report from the Philippine National Police headquarters at Camp Crame, Quezon City.

The raiding team arrested Hu Ling, the villa-cum-hospital supervisor, and Lee Seung Hyun, a pharmacist. The two have been detained at Camp Olivas, the regional police headquarters here.The raid was launched after authorities received a letter of complaint that reported a supposed COVID-19 patient and a drugstore in the unit.

More than 200 suspected coronavirus rapid test kits and syringes were recovered from trash cans at the villa. The unit has a small canteen with stacks of beer cases at the lobby entrance where a red sign welcomed visitors with well wishes in Chinese characters.

The hospital and the drugstore are in a large room by the swimming pool at the back of the compound, according to Police Brig. Gen. Rhoderick Armamento, the CIDG deputy director for administration.

The Chinese male patient was moved to a local hospital.

CDC did not say how long the facility had been existing, but Armamento said it might have been operating secretly for about three months. 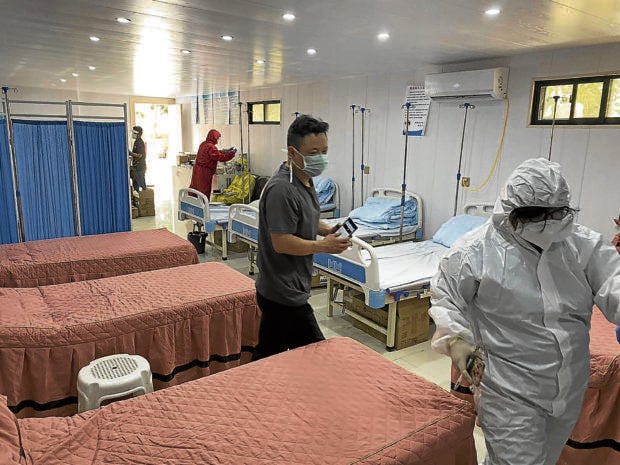 CLANDESTINE Within a residential villa in Clark Freeport, Pampanga, a room has been set up with beds for Chinese patients seeking treatment for coronavirus infection, according to the police. A government team raided the makeshift hospital on Tuesday, citing lack of permits from the Department of Health and the Food and Drug Administration. —CIDG VIA AP

Manankil said the two arrested Chinese failed to present a license to operate from the Department of Health and the FDA.

The raiding teams also seized medicines with Chinese labels that were reportedly used for treating the COVID-19 patients confined in the facility. The FDA said the medicines were not registered with the agency.

Police Lt. Gen. Guillermo Eleazar, who heads a national police force enforcing quarantine restrictions, told The Associated Press (AP) that the illegal hospital and drugstore could endanger patients instead of saving them because these did not conform with government health regulations and standards.

The Philippines, backed by the Chinese government, has launched a crackdown on large numbers of Chinese who mostly entered the country as tourists and then worked for online gambling operations, which are illegal in China. The outfits cater mostly to Chinese clients in mainland China.

Fontana is across the Asean Convention Center, which the government has converted into a quarantine site.

This is the second time since 2016 that the tourism estate has come under scrutiny. In November 2016, agents of the Bureau of Immigration rounded up 1,300 Chinese employed by an online gaming firm whose business permit originated from the Cagayan Economic Zone Authority in Sta. Ana, Cagayan province.

—WITH A REPORT FROM AP