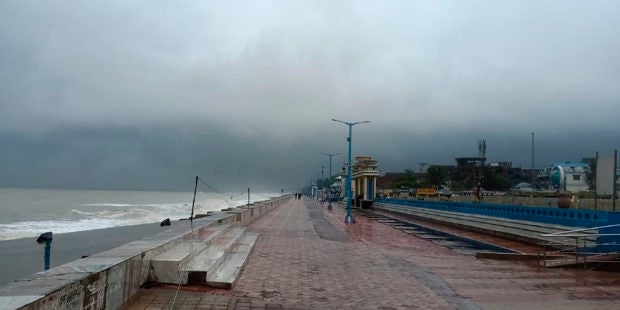 The promenade along the Bay of Bengal coast stands deserted ahead of Cyclone Amphan landfall, at Chandbali, in the eastern Indian state of Orissa, Wednesday, May 20, 2020. A powerful cyclone is moving toward India and Bangladesh as authorities try to evacuate millions of people while maintaining social distancing. Cyclone Amphan is expected to make landfall on Wednesday afternoon, May 20, 2020, and forecasters are warning of extensive damage from high winds, heavy rainfall, tidal waves, and some flooding in crowded cities like Kolkata. (AP Photo)

NEW DELHI — A strong cyclone blew heavy rains and strong winds into coastal India and Bangladesh on Wednesday after more than 2.6 million people were moved to shelters in a frantic evacuation made more challenging by the novel coronavirus.

Cyclone Amphan slowed slightly as it reached cooler waters near the coast. But with wind speeds ranging between 160 and 170 kilometers per hour (100 and 105 miles per hour), the storm could cause extensive damage: winds and heavy rain battering flimsy houses, a storm surge that may push seawater 25 kilometers (15 miles) inland and the possibility of flooding in crowded cities like Kolkata.

Masks and hand-sanitizers were hastily added to the emergency items stocked in storm shelters. But the pandemic has made it harder to save lives.

Some cyclone shelters in West Bengal were used for quarantining COVID-19 patients and migrant workers traveling after India’s lockdown was eased, officials said. Some schools are now being used to shelter people, news reports said.

The cyclone passed parallel to the coast of Odisha and heavy rain and strong winds had uprooted trees and collapsed some walls, said Bhabesh Mohanti, a teacher in Bhadrak district. “I just hope it passes soon, without destroying our town,” he said.

Some in the cyclone’s path saw a choice between the virus and the storm.

Many in the seaside resort town of Digha feared to go to shelters, fisherman Debasis Shyamal said. “They have been home for weeks, and are afraid of going into a crowd where they could get infected,” he said.

The densely populated city of Kolkata, which has nearly 1,500 cases of the coronavirus, is likely to see flooding, while some centuries-old buildings in the northern half of the city could collapse due to the strong winds.

In Sathira district in Bangladesh, local chief government administrator S.M. Mostafa Kamal said evacuees were given dry food, baby food, and medicine. He said they were distributing masks and other safety equipment to keep coronavirus from spreading during their stay in thousands of shelters.

Pradeep Jena, the Odisha state official, said the state has over 800 centers that are used during floods or cyclones, each holding 2,000 to 3,000 people. Of these, 242 were being used as quarantine centers. 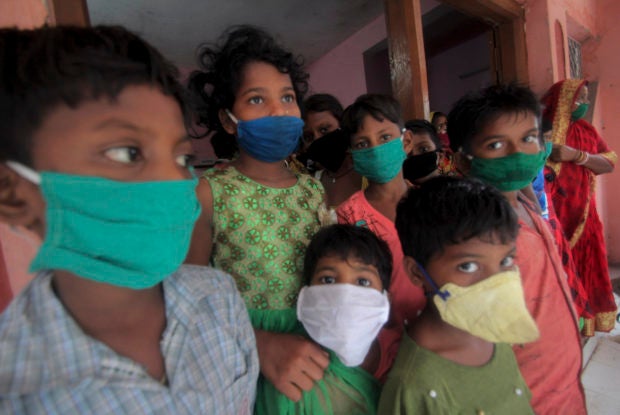 Evacuated children wearing masks as a precaution against the spread of coronavirus stand at a relief camp at Paradeep, on the Bay of Bengal coast in Orissa, India, Tuesday, May 19, 2020. Cyclone Amphan was moving toward India and Bangladesh on Tuesday as authorities tried to evacuate millions of people while maintaining social distancing. (AP Photo)

He said there was no precedent for managing a cyclone in the midst of a pandemic, and the need to maintain social distance means the state would need many more shelters than usual.

The cyclone is occurring during the Islamic holy month Ramadan, and some Bangladeshis who fasted during the day reportedly waited until the early morning hours before heading for the shelters.

The region is no stranger to devastating cyclones. But it is not the frequency of these cyclones, but the intensity of their wind speeds that have increased due to climate change and warming, said K.J.

This has to do with the temperature of the sea’s surface. Warm water is the fuel for cyclones. It is where storms get their energy and the amount of heat trapped in the top 700 meters of the ocean has increased.

“As a result, cyclones are intensifying faster than before,” he said.