Cash, long a refuge in uncertain times, now under suspicion 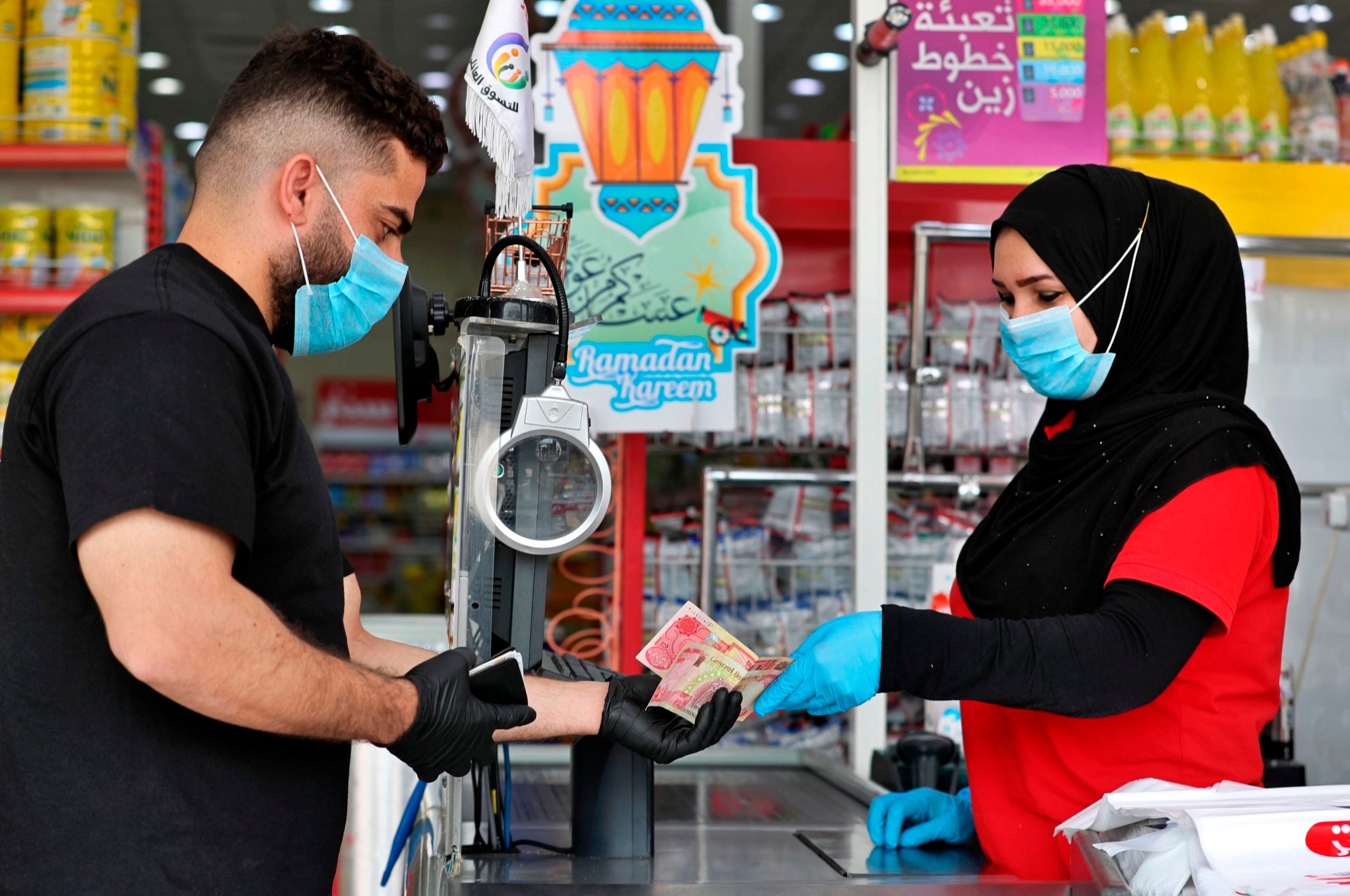 In this Saturday, May, 2, 2020, photo, a man uses banknotes to pay for his purchases at the mall in Basra, Iraq. The coronavirus pandemic has reawakened debate about the continued viability of what has been the physical lifeblood of global economies: paper money and coins. (AP Photo/Nabil al-Jurani)

BEIRUT  — In troubled times, people have been known to hoard currency at home — a financial security blanket against deep uncertainty. But in this crisis, things are different. This time cash itself, passed from hand to hand across neighborhoods, cities and societies just like the coronavirus, is a source of suspicion rather than reassurance.

No longer a thing to be shoved mindlessly into a pocket, tucked into a worn wallet or thrown casually on a kitchen counter, money’s status has changed during the virus era — perhaps irrevocably. The pandemic has also reawakened debate about the continued viability of what has been the physical lifeblood of global economies: paper money and coins.

From the supermarkets of the United States and Japan to the shantytowns of Africa to the gas stations of Tehran, a growing number of businesses and individuals worldwide have stopped using banknotes in fear that physical currency, handled by tens of thousands of people over their useful life, could be a vector for the spreading coronavirus.

Public officials and health experts have said that the risk of transferring the virus from person to person through the use of money is minimal. That hasn’t stopped businesses from refusing to accept currency, and some countries from urging citizens to stop using banknotes altogether.

In the midst of the coronavirus era, a thousand calculations are made before cash is handled — mostly with gloved hands. Some leave the money laid out on surfaces for days, for the virus to die. Others disinfect banknotes with spray. Some even microwave them in the belief it kills the virus. In China, banks are now required to sterilize cash with ultraviolet light or heat, then store notes for at least a week before they are given to customers.

“In many areas, cash was already beginning to disappear due the increased risk of robbery, the ease of internet ordering, and the ubiquity of cell phones,” says Zachary Cohle, an assistant professor at the department of economics at Quinnipiac University in Connecticut.

But is ditching cash altogether even feasible?

Sweden, Finland, Norway, Canada and others have slowly phased out cash to the point where using it in large amounts seems suspicious. The United Kingdom and Australia are among countries expected to become cashless societies. And in China, use of cash by consumers has plunged as smartphone-based payment services rose in popularity over the past decade.

But for much of the rest of the world, letting go of cash is difficult if not impossible.

Humans have a centuries-old emotional relationship with physical money that is difficult to erase.

“Currency represents value that we can hold in our hands. Cash provides a way for us to translate a day’s work into something tangible and easily traded,” Cohle says. “We may not know what goods we will need in the future. However, holding money allows for us to feel as though we can buy whatever goods we will need.”

“Cash ist Fesch” is a common saying in Austria and southern Germany. The phrase, which literally means cash is beautiful, reflects both countries’ attachment to cash — and not just among the older generation or those who worry about the loss of privacy that comes with cashless payments, but also among some younger people who see it as a status symbol.

“I always pay with cash — as a matter of principle!” Ingel Strobl, a 76-year-old pensioner, says while shopping at a bakery in central Vienna. “I know they want to abolish cash. But I don’t want that we lose our right to our own money. You know what I mean anyway! I stick to cash — corona or not.”‘

Since the virus outbreak, however, shops that have remained open, like grocery stores, have posted signs encouraging people to pay with cards. Many are: According to Germany’s central bank, the Bundesbank, 43% of people have changed their payment behavior in the past few weeks; now, a large percentage are likely to make contactless payments with a card.

Japan, for its sophisticated reputation, is also a solid believer in cash, which makes up for 53% of a household’s assets, according to the Bank of Japan. The belief in “cash is king” reigns, though the country has had zero interest rates for two decades, far longer than the rest of the developed world.

But the threat of the coronavirus could be the impetus the nation needed to move toward going cashless, said Hiroki Maruyama, who heads the Fintech Association of Japan, a nonprofit that supports innovation in financial services.

“The culture,” he says, “is slowly changing.”

CASH IN A CRISIS

In crisis-hit countries and parts of the world gripped by conflict or inflation, cash is still carried in thick wads for simple shopping expeditions.

In Lebanon, as the economic situation deteriorated late last year and the fear of banks collapsing mounted,  many people began saving cash in their homes. The sale of home safes surged. An estimated $3 billion was withdrawn and stashed at home, according to the governor of the country’s Central Bank.

As banks imposed capital controls, trips to the bank to withdraw foreign currency — followed by a trip to one of the ubiquitous exchange shops to change money on the black market — became the norm for many Lebanese.

“All I do is handle cash all day,” said one money changer in Beirut, who insisted on being identified by his first name, Ihsan. He said he feared unwanted attention from authorities.

“I wear gloves. But honestly? Corona is the last thing on people’s minds right now,” Ihsan said. “All they’re thinking about is how to handle this crisis and get money to live.”

In Iran, one of the world’s worst coronavirus hotspots, there are no international bank cards,

like Visa or Mastercard, because of U.S. sanctions. Many were surprised at the new banners that appeared at some gas stations in Tehran: “Service is only for those who will pay by debit cards.”

In Venezuela, it is common to see bolivars littering the streets because the local currency has lost its value.

“The truth is that I haven’t had any bolivars in my wallet for a long time,” said Fátima Figueras, a 32-year-old office worker, waiting in line to enter a Caracas pharmacy. “What worries me most is having to hand my debit card to a cashier who touches it,” said Figueras, wearing a facemask against the coronavirus.

Cash still rules in West and Central Africa even with the growth in regional banking options and mobile money service providers. Monthly banking account fees are prohibitive for many, and the self-employed often keep their savings at home in hard currency. ATM machines often don’t work.

Dorothy Harpool, director of student and community initiatives and lecturer at Wichita State University’s W. Frank Barton School of Business, predicted the pandemic would lead some consumers to rethink their use of cash. But going completely cashless, she says, is a long way off.

“Until everyone and every country has reliable access to the internet, I do not believe the pandemic will singularly change past practices,” Harpool said. In particular, cash transactions are also likely to remain for businesses operating under the radar of government and other regulatory bodies.

Ihsan, the Beirut money changer, said there are certain things you just can’t do without cash — particularly in a dysfunctional and developing nation.

“Like how else can you bribe a government employee to get your business done? With a credit card?”