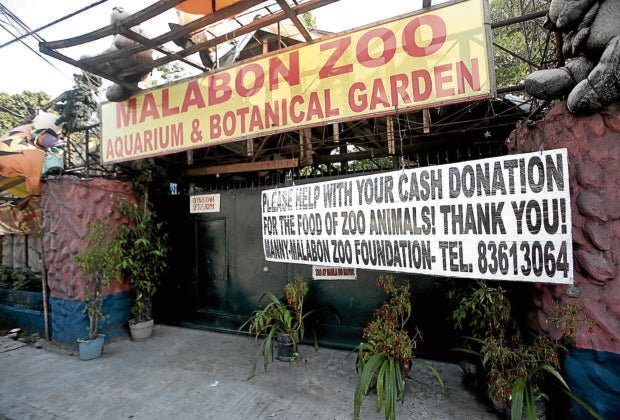 THEY NEED YOUR HELP, TOO Cash donations to buy food for Malabon Zoo’s resident animals are needed as the attraction has been closed to the public for the past two months, leaving it without any income. —RICHARD A. REYES

MANILA, Philippines — Some donations have started coming in for Malabon Zoo which has been closed since the whole of Luzon, including Metro Manila, was placed under quarantine.

Manny Tangco, who has been running the zoo for 30 years, said that they were able to get by in the past two months by using his savings and borrowing money from relatives. With the extension of the lockdown, however, he has no choice but to ask for cash donations to keep the animals from going hungry.

Tangco said he expected the zoo to remain shut due to its classification as a nonessential recreational place, meaning it would not be allowed to reopen even if the National Capital Region was placed under general community quarantine.

“When the quarantine was extended, I thought I had to do something about this,” he told the Inquirer in an interview. The 63-year-old zookeeper said that since he was not social media savvy, he put up a tarpaulin calling for donations outside the gates.

A netizen took a photo of the sign and uploaded it on social media. It quickly went viral and Tangco began receiving calls from people who wanted to donate.

“[Some were] apologizing that during this time, the focus has been on human beings and somehow the animals seem to have been forgotten. And I had to assure them that [they were right; the focus should be on] people, especially the poor and the hungry people. So I myself am ashamed to be asking for help for the animals during these trying times,” he said.

The response has been unbelievable, according to him. Even though some people are struggling with money and job security issues, they still donated money for the animals.

This has been the longest time that the “living zoo”—as Tangco refers to it—has been closed. But despite the lack of visitors, he said its residents were thriving.

“The plants inside the zoo have been blooming. The animals get excited when they see their zookeeper,” he added.

While the temporary closure may have drained the zoo’s funds, Tangco assured people that the animals were still taken care of.