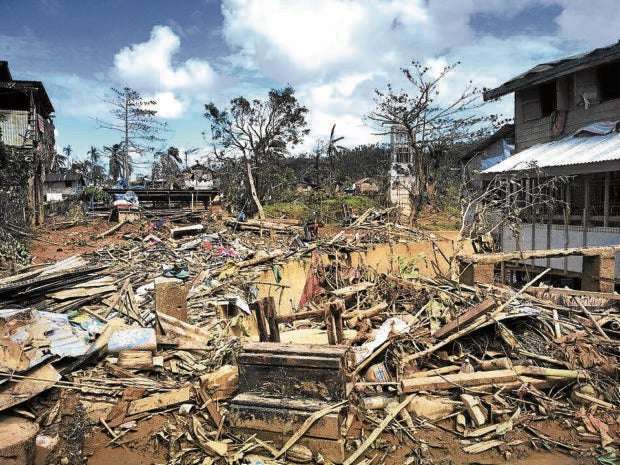 NATURE’S FURY Residents sift through piles of debris, tree branches and personal belongings in Jipapad, Eastern Samar, trying to salvage anything they can use after Typhoon “Ambo” devastated their town. —PHOTO COURTESY OF OFFICE OF REP. MARIA FE ABUNDA

BORONGAN CITY, Eastern Samar, Philippines — Strong winds accompanying Typhoon “Ambo” (international name: Vongfong) ripped the roof off the house of Octavio and Merlyn Alcido in Barangay Balocawe, Oras, Eastern Samar, last week, but the couple and their children chose to remain in what was left of their dwelling.

Their topmost problem though was where to get food, especially for their children.

Merlyn said the family had to rely on coconuts from trees toppled by Ambo so they could have something to eat.

Oras and eight other towns — Arteche, San Policarpo, Jipapad, Maslog, Dolores, Can-avid, Taft and Sulat — in Eastern Samar were placed under a state of calamity on Monday due to Ambo’s widespread devastation. The provincial government estimated damage to agriculture in these towns at P921.69 million and infrastructure losses at

At least 34,235 families have been displaced.

Before Ambo wreaked havoc on the northern towns of Eastern Samar, their residents had been engaged in farming and fishing, earning at least P100 a day. Now, they had lost their livelihood, forcing them to depend on government assistance.

“We have yet to receive food assistance from our local and provincial governments. The last time we received food packs was weeks ago when we got a total of about 30 kilos of rice delivered to us on a staggered basis amid the COVID-19 pandemic,” Merlyn said.

Her husband, Octavio, 40, a porter at the Oras wharf, has been idled for two months now due to the community quarantine imposed to contain the spread of the new coronavirus disease (COVID-19).

Jean Montallana, a 50-year-old laundrywoman, was also in a similar quandary.

“There is no work now and putting food on our table was already a problem even before Ambo hit us. Now, I really don’t know where we will get our next meal,” said Montallana, a widow who has been staying in a nearby school with her children after her house was destroyed by the typhoon.

“I hope our government will help us. For now, I can only turn to God for help during this time of difficulty,” she added.

On Monday, the local government started distributing relief packs to the affected families, most of them still staying in evacuation centers.

“We still need the help of our national government. Our [calamity] fund is almost depleted because of the expenses we incurred due to COVID-19,” Oras Mayor Viviane Alvarez said.

Ricky Calapano, 26, hitched a ride from the capital city of Borongan to Arteche to check on his family. Bringing with him a half sack of rice, he almost did not make it as the roads were blocked by debris and barely passable.He was shocked by the devastation that greeted him in Arteche. “It looked like a ghost town. The big structures, the church and the gym were severely damaged, as well as many homes, including ours,” he said.

Calapano said it would take years before his family could live again in their own house.

“The only valuable stuff we salvaged were a pot and a clay stove. At least, we can cook our meal but in a relative’s house,” he added.

In San Policarpo, where Ambo made its landfall, residents were also reeling from the typhoon’s aftermath.Marvin Morallos, the municipal registrar, said 3,209 families (14,545 people) were directly affected in the town.“Ambo was the most destructive typhoon to ever hit our town. Not even (Supertyphoon) ‘Yolanda’ (in 2013) or Typhoon ‘Ruby’ (in 2014) matched its strength here. Based on our initial assessment, around 70 percent of our structures, mostly houses, were destroyed by the typhoon,” he said.

“Our people, aside from the fact that they could not work due to the lockdown caused by this COVID-19, were rendered homeless by the typhoon,” Morallos added.